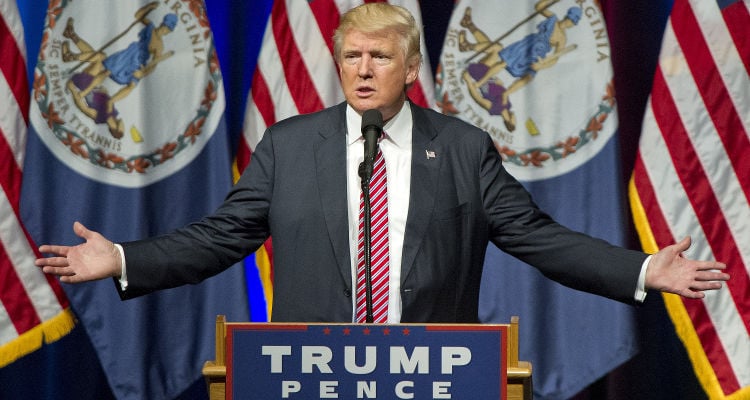 This one is going to hit you right in the jaw! People are suddenly asking, “Is Donald Trump dropping out of the election?” First of all it’s highly unlikely that a fighter like Trump would just roll over and give up. He has fought tooth and nail to get this far to be in the position to fight the ‘fight’ of his life. And given how hard he’s worked to get here, Donald Trump dropping out of the race looks highly unlikely. However this is exactly the question being asked all over Washington, D.C right now.

The Joke is Not Funny

There is no word yet from the man himself. However his campaign manager has sent an email to all reporters saying, “There is no truth to this whatsoever.” Trump has been making controversial statements from the very beginning of his campaign, but his latest comment takes the cake. If you’re wondering which of his many ridiculous comments we are referring to, it was the one in reference to Trump asking Russia to locate Hilary’s “missing” emails. He said, “Russia, if you’re listening, I hope you’re able to find the 30,000 emails that are missing.” Oh yes, he actually called on Russia to hack into Hillary Clinton’s email, which almost amounts to treason! And when he faced the storm of protest over his statement, he said he meant it as a joke! People are still shaking their head at the audacity displayed by Trump.

Has Trump Actually Lost It?

Several articles have appeared in the media questioning Trump’s sanity and mental well being. In fact, on MSNBC, Joe Scarborough said that he was taking calls all day long from Republican party members asking about Trump’s mental state! Conservatives, right-wing bloggers and regular citizens called him up to inquire if Trump was mentally fit. Washington Post columnist, Eugene Robinson even wrote an article titled, “Is Donald Trump just plain crazy?” Even President Obama himself said publicly, that he felt Trump was ‘woefully’ unprepared for holding this highest position in office.

Who is the Next Best Man?

Let’s entertain the idea of Donald Trump dropping out. What would happen? It means that the Republican party would have to run helter-skelter to find a suitable replacement, and the clock is ticking! Another convention is out of the question, so the decision will have to be made by the Republican National Committee [RNC]. Though a Presidential candidate has never dropped out of the race yet, it has happened in the case of the Vice Presidential elections. According to the rules of the party, the RNC can nominate a candidate if Trump does drop out. It is not necessarily the case that the candidate must have run in the primary, so it could be anyone. It could be Mike Pence who is currently running for VP, it could be Ted Cruz or even John McCain.

Rebellion in the Ranks?

The main qualification for this candidate would be that he must unite the party. After all, Trump has been the most divisive Republican candidate ever. Trump has managed to anger almost everybody in the country. His comments have made religious minorities, Mexicans, women, and immigrants turn against him and his public spat with an American fallen soldier’s family may  have hurt him much more than he thinks. Trump’s corrosive comments have ruffled so many feathers that many of his own Party members have even turned against him.

People are turning on CNN to verify if Donald Trump quitting the election is true or not, but right now there is no official confirmation. Privately, some Republicans have admitted that the party is frustrated at Trump’s erratic and self-destructive behavior. However, the man at the center of this storm, Trump himself, continues to insist that all is well. Trump says the party has never been more united. Only time can tell. And it will, very soon.