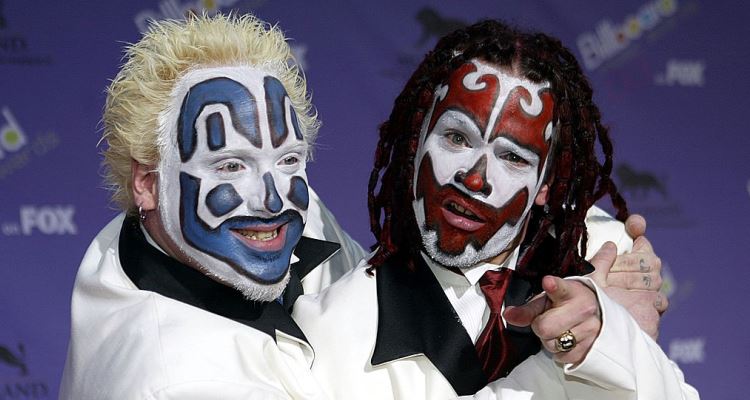 If the recent film It wasn’t scary enough, clowns are now marching in the nation’s capital! Who are the Insane Clown Posse members, and why are they marching? This weekend is a busy one for protesters, as they rally to stand up for “American culture and values.” Here’s the scoop.

This weekend will be a busy one for political activists in Washington, D.C. There’s the Mother of All Rallies, the March to Protect American Democracy, and the Juggalo March. Who are the Juggalos? The Juggalos are fans of the Insane Clown Posse “gang” rap group, and it was their 1992 song “The Juggla” that inspired the name of the fanbase. The group considers itself to be “the most hated band in the world.” The rap group is mostly popular among young white males from working-class backgrounds, who tend to “feel that they’ve been misunderstood outsiders their whole lives, whether for being overweight, looking weird, being poor, or even for just liking ICP in the first place,” according to a detailed piece on the band in 2010.

Where Did the Clown Concept Come From?

Juggalos often paint their faces like clowns, and sport tattoos of “hatchetmen”–concepts which are based on the logo for the group’s recording label, Psychopathic Records. It also refers to the title of a song that includes the line, “Got a chopped-off head chilling in my lap.” There is even an annual festival known as the Gathering of the Juggalos, sponsored by the label. For the past 18 years, fans have been meeting up at the festival to listen to artists under the label, and special guest musicians.

Not a Political Group

The rap-rock group and members of their huge fan following are marching this weekend in protest against the FBI for classifying them as a hybrid gang. Although fans of the Insane Clown Posse are not affiliated with a political group, reports say they have engaged in criminal activity in the past, as well as violent acts. Their crimes were reported to be “sporadic, disorganized, individualistic, and often involve simple assault, personal drug use and possession, petty theft, and vandalism.” One of the concerns of authorities watching out for these fans are their recent development of organization through the use of social networking websites. As for the rappers, they denied any allegations that they were a gang or affiliated with any. They stood up for their fans in a public statement, and went so far to sue the Justice Department and FBI over the accusations in early 2014. Check out the Insane Clown Posse YouTube video below to hear what they had to say.

You don't have to identify as a Juggalo to participate in this march!

What is ICP’s net worth in 2017? The American hip hop duo reportedly has a net worth of $30.0 million! The clown-faced members include Joseph Bruce a.k.a. Violent J, and Joseph Utsier a.k.a. Shaggy 2 Dope. Abbreviated as “ICP,” the band started in 1989, originating in Detroit, Michigan. Their genre of music has been described as horrorcore and hardcore hip-hop, and they’re known for their elaborate live performances. Their career success includes two platinum and five gold albums, 6.5 million albums sold in America as of April 2007, and the formation of their own professional wrestling federation known as ‘Juggalo Championship Wrestling.’ Insane Clown Posse’s albums include Carnival of Carnage (1992), Ringmaster (1994), Riddle Box (1995), The Great Milenko (1997), The Amazing Jeckel Brothers (1999), The Tempest (2007), and more! The Insane Clown Posse tours include “The House of Horrors Tour” and the “Amazing Jeckel Brothers Tour.”