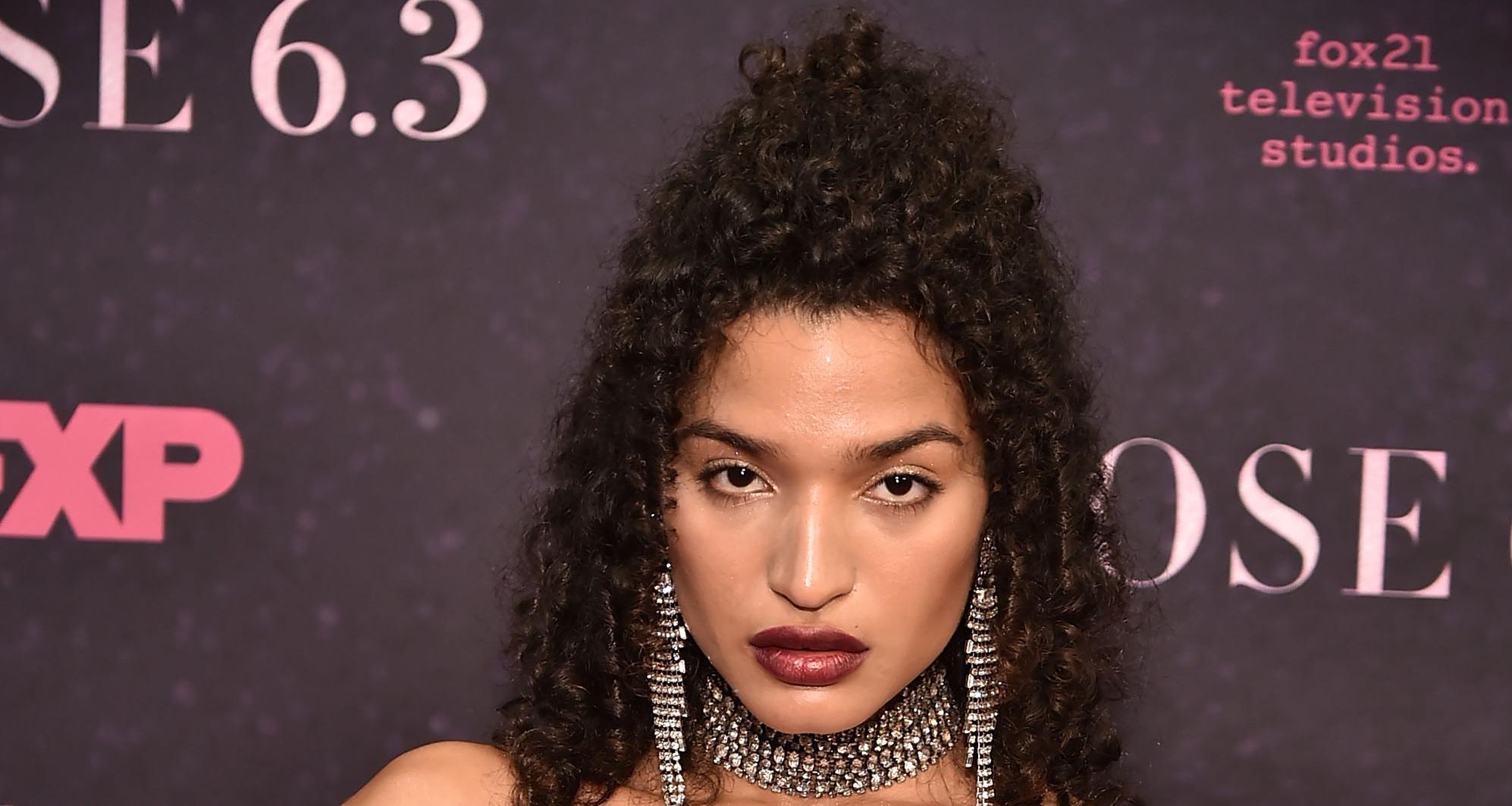 Indya Moore from Pose is an indomitable transgender female who’s come to mainstream attention thanks to the show. She plays Angel, a transgender woman of color in ‘80s New York. But before the show, Moore was already breaking barriers and broadening horizons.

Pose is the latest period offering of FX, courtesy of Ryan Murphy and Brad Falchuk. The duo that brought us some of the best anthology series of the generation have now gathered a host of talent to bring the LGBTQ+ community front and center.

One of their most buzzed about stars is 23-year-old transgender model and actress, Indya Moore. We are going to celebrate the actress and give you more about the girl who portrays the fierce Angel in Pose with details from Indya Moore’s wiki.

Indya Moore Was Discriminated Against in Her Childhood

Indya Adrianna Moore believes herself to be a case study of perseverance, after going through a tough childhood struggling for acceptance. She was born in 1995 in the Bronx and boasts an ethnicity traced to Haiti, the Dominican Republic, and Puerto Rico.

Moore identifies as a transgender and has known of her identity since she was a toddler.

Like many people from the LGBTQ+ community, she was subjected to transphobia, and it made her parents afraid for her well-being.

“My [birth] parents loved me dearly, but we were having issues with my identity being [recognized at home],” said Moore. “They thought I was essentially in harm’s way because of the way I existed.” 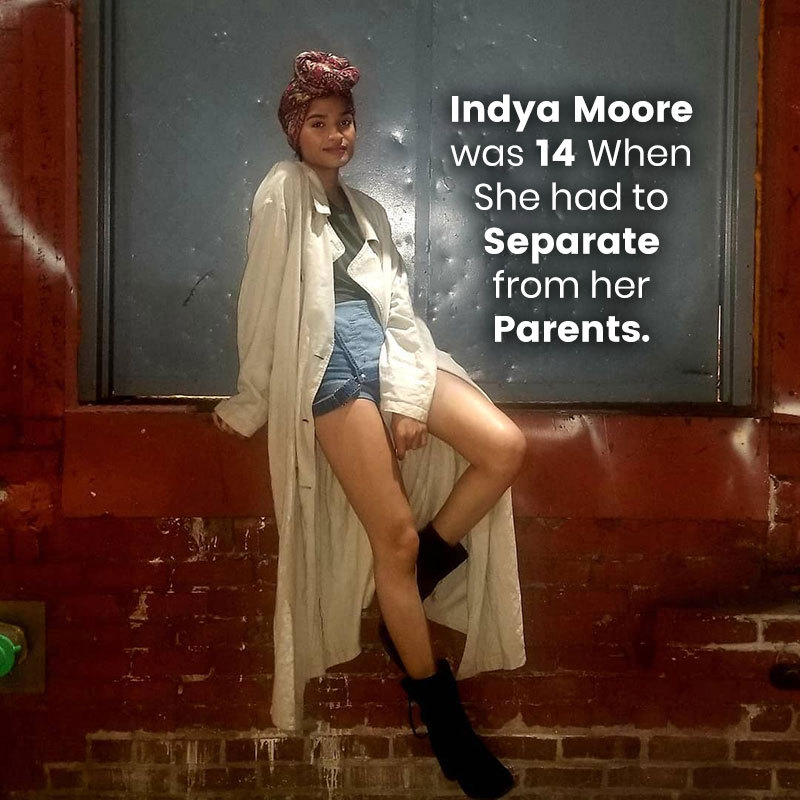 Moore was 14 when she had to separate from her parents. She lived in a series of foster homes where she endured discrimination from within (and outside of) the group homes.

“They may have known I was assigned male at birth, and they didn’t understand why I didn’t exist [as male] like I was [then].”

The discrimination only made Moore stronger, who got out of the system to pursue her path.

Fun Fact: One of her Pose costars, Jackson, was her counselor when she was a 14-year-old attending an after-school program for trans students!

She Dropped Out of School to Model

Moore dropped out of school when she was 15 and began modeling. She got her big break at 22 when she participated in the New York Fashion Week.

“I didn’t make a lot of money, but I was respected,” she said of her experience. 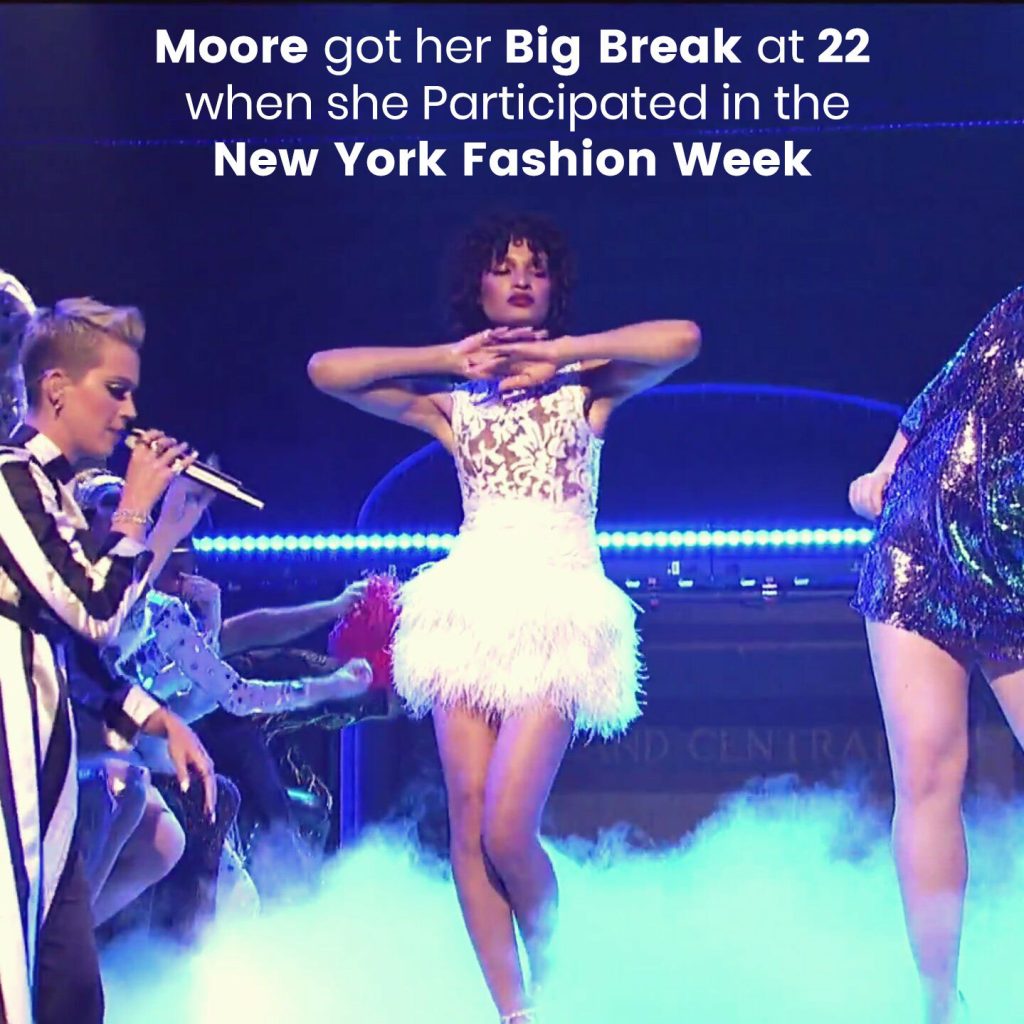 Modeling is not an easy career, and for a trans model, it was far more difficult. Moore persevered in the fashion world while living in a hostel-style accommodation in Queens because rent in New York is no joke.

And it’s not easy either. Moore explained that if she stayed out for more than 24 hours, she’d lose her bed to someone else.

Nonetheless, Moore continued to make waves in the fashion industry. She wasn’t signed to an agency but bagged gigs with Gucci and Dior. She eventually earned her GED while modeling, too.

Several of her jobs were the companies’ and brands’ first experience with a gender-variant model. This makes Moore nothing short of a pathbreaker.

Moore was a guest performer alongside Katy Perry and Migos on SNL. She has acting experience with feature films like Saturday Church that premiered at the Tribeca Film Festival.

She’s also got ambitions for a stable job. One of her goals is to study biotechnology. While her current hectic schedule and paying bills are her top priority, she hopes to go to school when she’s stable in her professional life. (With her pivotal new role on Pose, it certainly looks like she’s on her way there!)

Besides modeling, Moore has been featured in music videos. Her most famous video to date is J.View’s “Don’t Pull Away,” where she shared screen-space with androgynous model Elliott Sailors.

Indya Moore and Elliott Sailors shared a smooch on camera. And according to Moore, it breaks transgender stereotypes.

“I’m not interested in women, but it exercised my acting dynamic,” she said of that experience. 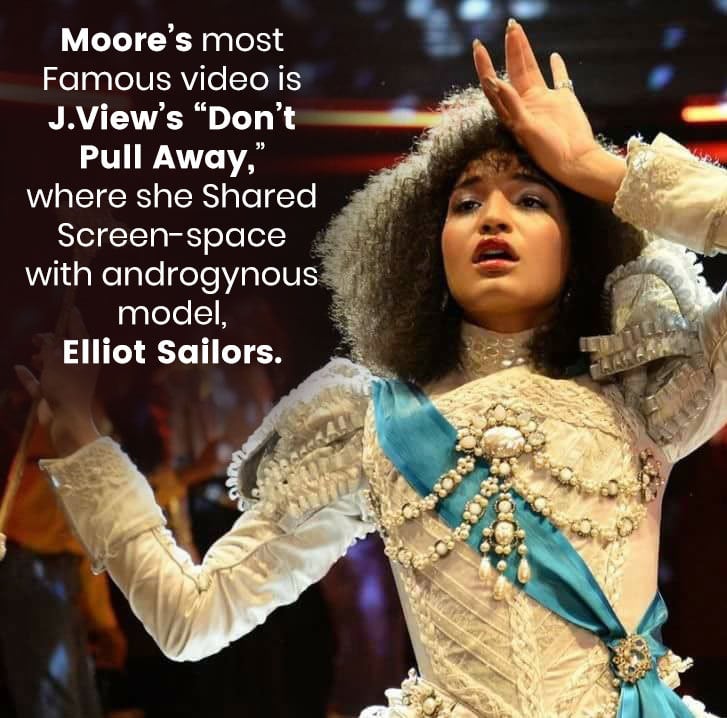 Moore is constantly striving to bring a change in the perception of trans people in entertainment.

She recalled failing an audition, and the sentence in the rejection letter read, “Very often the world of fashion depends on having the right look at the right time.”

For a transgender woman of color, that sentence really struck Moore. She illustrates with the example of Valentina Sampaio, the transgender model who made history after being featured on the cover of Vogue Paris.

Moore says Sampaio has a European look, which the fashion industry tends to capitalize on.

“I need them to stop acting like beautiful black and brown women do not exist,” Moore lamented.

Moore Was Cast in Pose on the Spot

Ryan Murphy and Brad Falchuk’s new show has brought together the biggest cast of trans and gay people ever.

Indya Moore didn’t have much acting experience when her agent received a casting notice for Pose. She originally wanted to audition for Bianca and felt Angel’s characterization was too “shallow.” But auditioning as Angel changed her mind about it.

Murphy was so impressed by her audition that they cast her on the spot without a screen test!

Indya Moore dedicated her portrayal of Angel to Naomi Hersi. She was the Somalian transwoman who was brutally murdered by a man and a teenage girl in London in March 2018.

My Role of Angel In POSE is Dedicated to Naomi Hersi.She is a Somali trans woman who loved the color yellow, tennis music and was described as a movie and tv addict
she was murdered in a london hotel room by a 24 y.o man and 17 y.o girl.

Peace be upon you, Naomi.

“Naomi’s murder in that London hotel this year could have been Angel’s story,” Moore said. “No one wants to be alone and everyone wants to be loved.”

Moore hopes Pose will give the LGBTQ+ community the representation it deserves. She believes Pose has a strong message that should reach out not only to its viewers but also to the current administration.

“Having policymakers in Washington attack our right to exist by law is frightening on a level that is difficult to describe,” Indya Moore opined. “Pose will hopefully help them see our humanity if they truly want to see it.”