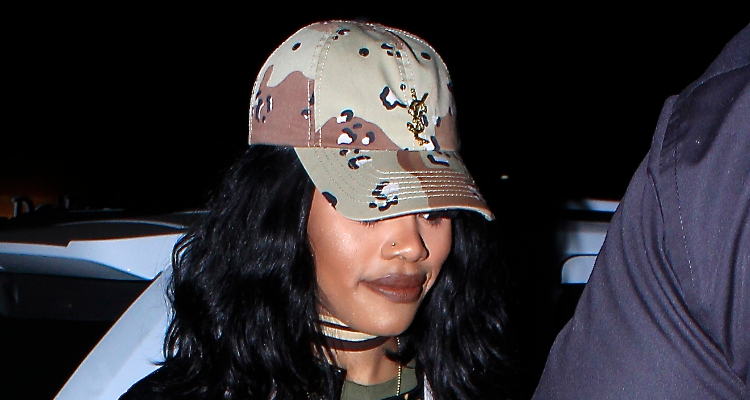 The video featured Taylor doing exercises in the gym. The video is heavily focused on Taylor’s body, as she is seen working out and sweating in the gym. It should come as no surprise that the “creative vision” for the video came from Kanye West. Leave it to Kanye to self-promote the premiere his new video which shows a woman, half-naked showing off her “assests” and call it art. Now, people are asking, “Who is Teyana Taylor?” Taylor is of African-American and Trinidadian descent. She started singing at the tender age of nine. Taylor participated in many talent competitions but never won. Taylor has been strongly influenced by the music of Lauryn Hill, Michael Jackson and Stevie Wonder. In 2008, Taylor released a full mix tape album called, From A Planet Called Harlem. Her debut single, “Google Me” was released to promote the album.

In 2010, Taylor got a chance to work with Kanye West on his album, My Beautiful Dark Twisted Fantasy. After hearing Taylor hum to some of his songs, West asked her to put some vocals on a few tracks like, “Dark Fantasy” and “Hell of a Life.” Her work on West’s album gained her a lot of praise and publicity. Taylor then wrote songs for major artists like Chris Brown, Usher and Omarion. Later, she released her second album titled, The Misunderstanding of Teyana Taylor. In 2014, Taylor released her first studio album VII. It sold poorly as only 24,000 copies were sold.

Things were going better in her personal life. She and her fiance, basketball player Iman Shumpert had a baby girl named Iman Tayla Shumpert Jr. Taylor went into labor and there was no time to go to the hospital. Shumpert delivered the baby girl with his bare hands in the couple’s bathroom. Months later, Taylor returned to singing by releasing her single, “Freak On.” Taylor announced that this single would be followed by the release of her second studio album shortly.

Taylor and Shumpert are now in the news for appearing in Kanye West’s newest music video, “Fade.” The video stars Taylor doing a Flashdance homage, but with more thrusting -and less clothes. She then makes out with her husband, Shumpert in a saucy shower scene. Finally, she morphs into a cat-faced humanoid. Some white sheep and a baby are also featured in the video. Did you know Shumpert himself is also a rapper? He has released several singles and music videos, as well.

Shumpert’s real profession is basketball. After some years with the New York Knicks, he shifted to the Cleveland Cavaliers. As a member of this team, Shumpert won an NBA Championship in 2016. He is currently signed on for the Cavaliers for a four year, $40.0 million contract, and Taylor herself is not far behind when it comes to achievements. In 2013, Taylor signed a deal with Adidas to design and release two pairs of sneakers. The first pair, called Harlem GLC’s, hit stores in 2013. Currently, she is focused on designing and releasing her second pair of sneakers. With a new baby at home and her husband supporting her every venture, Taylor is in great spirits. Her joy and energy are clearly visible on Kanye West’s “Fade” and her body is quickly becoming the envy of every woman; you’ll know what we mean when you watch the video!

For more on Kanye West, just check this out –