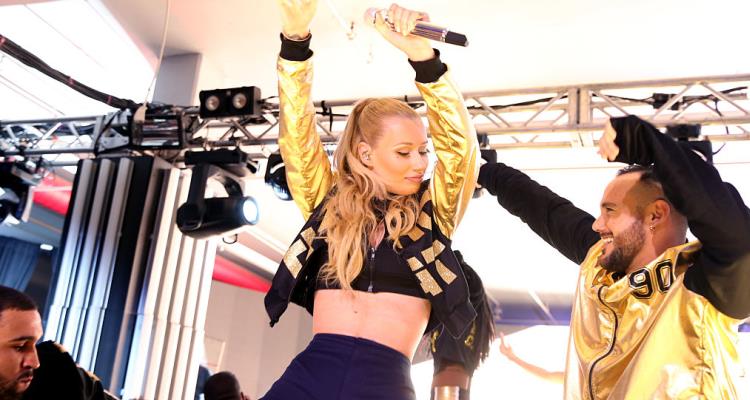 After staying under the radar for some time, it seems the Black Widow is back! After reports of financial struggles, the hip-hop princess is bouncing back, and is looking better than ever while doing it! Recently spotted out in L.A. (in the sexiest yellow mini-dress ever), fans are ecstatic to see her back on the scene! Iggy Azalea is currently on tour, and you can catch her next in Miami, Florida. The rap doll will perform on December 9, 2017 (Saturday) at the Historic Virginia Key Park in the Magic City! In case you forget how sizzling she can be, check out these unbelievably hot Iggy Azalea pics you have never seen before!

The Australian rapper made quite a name for herself after she released her “Pussy” video on Youtube back in 2011. The woman has a way with words, and her fans love her for her highly imaginative videos. The rapper came to the USA when she was 16, and since 2011, has made a glittering life for herself. Not to mention, she’s ridiculously hot. She’s known for her flashy, risque outfits and long blonde locks, while most comment on her “bootylicious” bod. Check her out for yourself as we’re counting down the top 10 Iggy Azalea’s hot pics that we think will make you “Go Hard or Go Home!”

#10. There’s Something Powerful About White and Gold

Azalea was born Amethyst Amelia Kelly, and she took the risk of leaving her hometown of Mullumbimby, New South Wales, Australia, when she as 16, to pursue a career in Hip-Hop. Her mother was in tears when left for her adventure, and Azalea recalls “’I’m going by myself. I’m fu****g crazy.”

Iggy Azalea has been nominated for an award 99 times, and she has won 52 of them, including an AMA for Favorite Artist- Rap/Hip-Hop. She received Billboard Music Award for Top Streaming Artist and Top Rap Artist, and then went on to get nominated for a Grammy in 2015 for Best New Artist, Record of the Year and two more.

Did you know Azalea worked illegally in the States to support herself? She got her GED when she arrived in America, and began living here on a visa waiver for six years. In 2013, she received her O visa for five-years. Hard work pays off right?

So excited to be a part of the @bondsaus #bonds100 campaign!

Iggy Azalea has worked with some of the biggest record labels in the industry today. Def Jam from where biggies like Justin Bieber, Jay-Z, Rihanna, Lady Gaga and countless more have found fame; Azalea also signed with them. She is also associated with Mercury Records and Virgin EMI. The rapper has achieved success within the short while since 2011, and she is only on her way up!

Azalea has performed with the likes of Beyonce and Jennifer Lopez, for the benefit concert Chime For Change, which was founded by Gucci. She has appeared as a featuring artist in many videos of some influential people in the music industry.

Her best-known piece is “Black Widow” ft. Rita Ora, and the video has over four million views on YouTube. Her song “Booty” with Jennifer Lopez also did well, but as usual, fans went crazy for her videos.

Azalea was reportedly dating LJay Currie, but the couple split and the last time we saw Azalea with a man was when rumors of her dating Quavo spread like wildfire. She was engaged to Nick Young in 2016, but they broke off the engagement after she allegedly caught him cheating on her with Keonna Green. Pregnancy rumors were also afloat, which is why Azalea called off the engagement.

#3. The Girl with the Golden Hair

Iggy Azalea revealed to the media, that she has had a breast augmentation and has even gone under the knife for a nose job. Azalea wanted to keep this all a secret, as she didn’t want women feeling bad about their bodies. “I did change something: Four months ago, I got bigger boobs! I’d thought about it my entire life.”

Enjoying the last days of Summer thanks @priverevaux

As of now, it looks like Iggy Azalea is back to leading the single life! The 27-year-old will definitely find love, but until then, she’s living it up the best way she knows how, and she’s always slaying in the rap game. And he doesn’t need a man to shine! So, if you were expecting an Azalea style wedding anytime soon, you’ll just have to wait!

Iggy Azalea is an amazing artist, and a very creative woman. She has achieved in seven years what many can’t in a lifetime, and she’s still serving up fire anytime she’s in front of the mic! She dropped her latest album Digital Distortion in June of this year, and if you want to see her live, then you better get your tickets to her tour today!