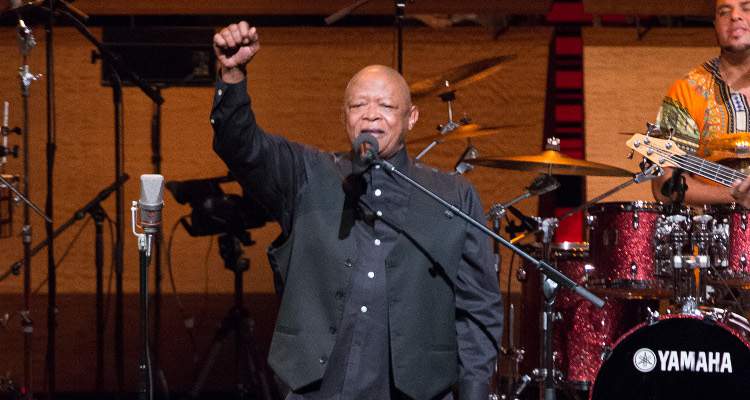 The father of South African jazz, Hugh Masekela, died on January 23, 2018. How did Hugh Masekela die? Keep reading for all the details about Hugh Masekela’s cause of death.

Right now, the world is mourning the loss of another talented musician who touched the hearts of millions. South African trumpeter and composer Hugh Masekela is dead at 78. He reportedly “passed peacefully” in Johannesburg surrounded by his family and friends.

How Did Hugh Masekela Die?

What a life. Thank you. Rest in Power. #HughMasekela #Legend #Icon

Masekela’s family released a statement that read, “After a protracted and courageous battle with prostate cancer, he passed peacefully in Johannesburg, South Africa surrounded by his family.”

Last October, his team released a statement revealing that the musician was fighting prostate cancer. Hugh Masekela’s cancer was diagnosed in 2008.

Masekela’s son took to Facebook and wrote, “It is with heavy heart that I confirm that my father, Hugh Ramapolo Masekela, has hung up his horn after a long battle with prostate cancer. It is difficult to comprehend that this moment is real. To me, my father has always been both ageless and immortal. Of the countless shows I had the honor of watching my dad perform, each felt like the first, each felt brand new.”

He added, “To know Hugh Masekela was to know no matter class, creed, color, religion or any other made up distinctions, he stood with empathy and compassion, locked arm in arm with the distressed, displaced and downtrodden everywhere and anywhere on this planet. He carried a deep seeded belief in justice, freedom and equality for all peoples to the very end.”

Many fans of the late musician have expressed their condolences to Hugh Masekela’s family through social media.

The musician was born in 1939 and started playing the trumpet when he was just 14 years old. Lovingly called Bra Hugh, he was known for his jazz compositions, including singles like “Soweto Blues” and “Bring Him Back Home.”

In 1968, Masekela’s song “Grazing in the Grass” was an international No. 1 hit. Throughout his career, he worked with musicians like Paul Simon and Herb Alpert.

Hugh Masekela’s first marriage was to South African activist and singer Miriam Makeba. They were only married for two years.