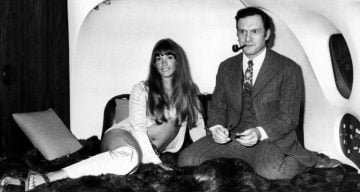 Playboy mogul, Hugh Hefner passed away on Wednesday (September 27) at the age of 91. One of the many women in his life was Barbi Benton. The former Playmate was once Hefner’s main squeeze and her career was launched by the late founder of the Playboy brand.

At the time when the world lost pop culture’s biggest sexual liberation icon in the form of Hugh Hefner, we look at the many Playboy Bunnies that came and went in his life. Among his many live-in girlfriends at the notorious Playboy Mansion, a few Playmates were special. One of them was Barbi Benton. Hugh Hefner launched his longtime girlfriend’s career but she has been relatively out of the spotlight lately. Where is Barbi Benton today? Here’s what you need to know.

Who Is Barbi Benton?

Barbara Lynn Klein was born in New York, but her parents moved her to Sacramento, California when she was two years old. At 16, she began modeling while attending UCLA to become a veterinarian. But she gave up on that career when she realized she was terrified at the sight of blood. At 18, she landed a job with the infamously famous, Playboy. She was an extra on the show, Playboy After Dark where she met the charismatic Hugh Hefner.

Two recording sessions with Hefner later, the 42-year-old asked her out on a date. Their first conversation became one of Hefner’s most iconic lines. She told him, “I’ve never dated anyone over 24 before,” to which he replied, “That’s all right, neither have I.”

She changed her name to Barbi Benton on his urging during their long relationship from 1969 to 1976. During their relationship, Hefner made Benton the heart of the Playboy Enterprise. She appeared on the cover of Playboy four times in July 1969, March 1970, May 1972, and December 1985, and in nude photo layouts in December 1973 and January 1975. Funny enough however, she was never named Playmate of the Month.

Benton had an eye for real estate. She was the one who found the property that would become the Playboy Mansion.

Not one to be limited to just the Playboy Enterprise, she sought to expand her acting and music credits. She landed a spot on Hee Haw, a comedy show where she did short sketches. She was on the show for four seasons but left to pursue a Hollywood career.

Her first movie was the German comedy film, The Naughty Cheerleader in 1970. She got a regular performing role on TV in shows like The Love Boat and Fantasy Island. She was on the short-lived ABC comedy, Sugar Time!, the slasher film Hospital Massacre, and the fantasy film, Deathstalker.

At the same time, she launched a foray into country music. Her record, Brash Buckles (1975) peaked in the top 5 of the Billboard country music chart. Out of the several albums she released, she personally produced one of them. She wrote and composed the songs and played the piano in it. Her single, “Ain’t That Just the Way” was covered by Lutricia McNeal, which became a hit.

Though she was a famous face, she couldn’t turn her popularity into stardom. The latest estimates put her net worth at $20.0 million. But she seems to have turned her back on Hollywood and now works as an interior decorator and designer.

Moving On from Hef

Hugh Hefner has been married only three times despite having his fair share of women, and then some. Benton was one of his most famous girlfriends and many at that time were convinced that she would be the new Mrs. Hefner. But Benton knew that Hef wasn’t going to settle down, and she dreamed of having a family. So, she left Playboy and the Playboy Mansion.

She eventually met real estate developer, George Gradow and they married in 1979. Their love story is the sweetest. Gradow’s employee once asked him when he’d get married. He said, “When I find someone who looks like Barbi Benton.” At the time, he  saw the Playmate on Sugar Time! and became a fan. Coincidentally, that employee knew Benton’s mother and arranged a meeting between Gradow and the actress.

“I met George as a businessman, a financial adviser, and not as a possible husband,” said Benton who was dating actor, Andrew Prine when she met Gradow. But her romance with the actor didn’t last, and she invited the businessman to the Academy of Country Music dinner. After a few months of dating, Gradow proposed to her. They have two children, Alexander and Ariana.

After their marriage, the couple did very well for themselves. They purchased a mansion in Pasadena, California with 28 rooms and an all-important swimming pool. They sold their marital home in the mid-’90s for $3.7 million. They lived in several lavish homes until they shacked up in a palatial L.A. estate.

George Gradow ran into some trouble with the IRS for which he served some prison time. During Gradow’s legal troubles, they put up the L.A. mansion for sale for an exorbitant price tag of over $17.0 million. When it didn’t sell, the house was relisted at revised prices until it came down to nearly $12.0 million.

Benton and Gradow are still going strong today. The 67-year-old is no longer around in Hollywood but she still gives interviews about her life in the Playboy Mansion, and even spoke out on Bill Cosby’s sexual harassment scandal.

She and Hef remained friends after they parted ways. But to the Playboy pioneer, she was the one that got away. “I only regret not marrying Barbi,” said Hugh in an interview. “Because it finally led to our going separate ways. But I have been married and have children and wasn’t, and am not, interested in doing it again. Barbi hadn’t had that and wanted it.”