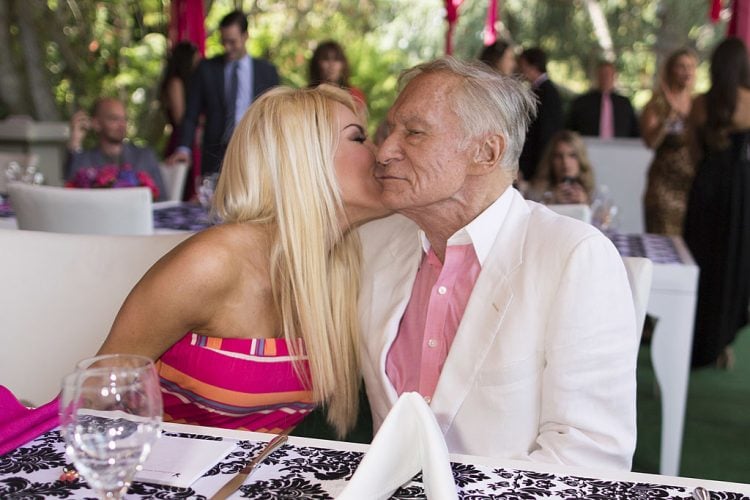 When it comes to sugar daddies, no one does it better than Hugh Hefner, founder of Playboy Enterprises, Inc. and publisher of the iconic men’s magazine Playboy.

Hefner started his career in publishing working as a copywriter for the men’s magazine Esquire. After quitting his job, mortgaging his furniture, taking out a loan from the bank, and gathering money from investors (including his mother), Hefner launched the first issue of Playboy in 1953—it featured Marilyn Monroe and managed to sell over 50,000 copies.

As soon as the first issue was published, Playboy became a point of controversy—not just because of the nude women on its pages, but because of its push for more liberal drug laws. But despite the backlash, Hefner’s business venture thrived, with issues of Playboy selling out in a matter of weeks. The 1972 edition, which remains the best-selling issue to date, sold over seven million copies.

Playboy Enterprises, Inc., which was initially developed just as a means to publish the magazine, eventually expanded into a television channel, 12 digital networks, various web sites, a radio station, night clubs, and a licensing division. As the face of Playboy, Hefner became a leader in business—he also solidified his reputation as a sugar daddy extraordinaire.

Hefner’s first marriage arguably had a hand to play in his promiscuity later in life. His first wife admitted to having an affair. In order to ease the guilt and hopefully save the marriage, she reportedly allowed him to sleep around. Their marriage officially ended in 1959. By that time, Playboy Enterprises had taken off and Hefner recreated himself as a new man. He admitted to dating most of his Playboy models, most of them being decades younger than him.

In 1989, at the age of 59, Hefner married his 27-year-old sugar baby, Playmate of the Year Kimberley Conrad. They had two children together and eventually separated, with Conrad moving out of the Playboy Mansion and into a house next door.

In true sugar daddy style, Hefner celebrated the split by filling the mansion with a bevy of young women—he even admittedly dated up to seven of them at the same time. But that sugar daddy dream came to an end in 2008, when they all decided to move out of the mansion. That’s when Hefner, now 82, began dating 22-year-old Crystal Harris, as well as a pair of 20-year-old twin models.

Two years later, his relationship with the twins ended, but his relationship with Harris persisted. In March 2010, Hefner finally had his divorce from Conrad finalized (they were separated, but stayed legally married for the sake of their kids), and a few months later, he proposed to his sugar baby. Harris gladly accepted the estimated $90,000 ring, only to sell it after breaking off their engagement just days before the wedding.

Many people thought she had finally come to her senses about marrying a man who was 60 years older. But alas, they reconciled about a year later, and Harris got another ring courtesy of her sugar daddy—this time it was a five-carat diamond surround by 1.5 carats of smaller diamonds on either side, set in a platinum band, estimated to be worth up to $1.0 million. Harris and Hefner officially tied the knot on December 31, 2012, and have been married ever since.

To put the age gap in perspective, Harris is 34 years younger than Hefner’s eldest child. The sugar daddy has acknowledged the fact that he won’t be around forever—especially now that he’s closing in on 90—and he’s doing whatever he can now to make sure his sugar baby wife is well taken care of after he passes. That’s why he dropped $5.0 million on a mansion that’s sitting in a trust, just so that Harris will have somewhere to go when she’s no longer entitled to rule the Playboy Mansion as Mrs. Hefner. The best part? Harris doesn’t technically have to wait for Hefner to die in order to benefit from the house—if he outlives their marriage, she’s still entitled to her share.