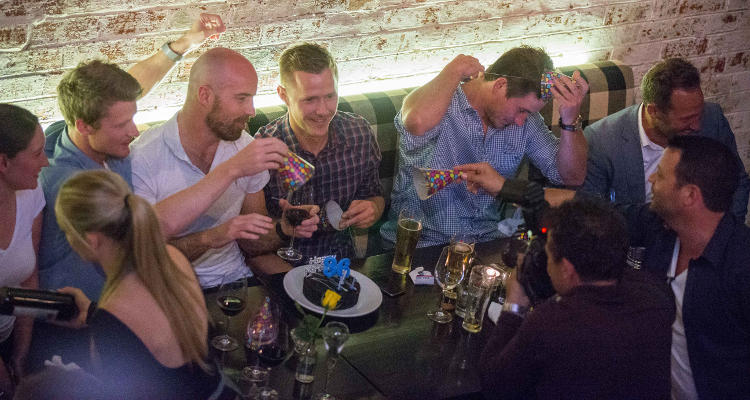 The question on every viewer’s lips is “How tall is Alex from The Bachelorette?” Here is the tall and short of it. Alex Woytkiw from The Bachelorette is 5’7” tall, and although he got the “short end of the stick” on Monday night’s episode, many are interested in learning more about the latest Bachelorette cast off. He may be lacking in height, but nevertheless, Alex has the heart of a lion. He is a former U.S. Marine who has fought for his country with great courage. Being in the Marines has made Alex grow tremendously as a person. Now, he dreams of earning a master’s degree and is intent on running a business along with his brother. Alex is very close to his family, which is comprised of Adam, his twin brother, his sister and his mother Loren. His mother raised Alex and his siblings on her own. It’s no wonder Alex likes to spend as much time as possible with his family! Alex never says no to an adventure when it comes his way. Alex, The Bachelorette’s contestant, loves tattoos and has many of them on his body. The tattoos are either about his family or work related.

Nothing is as interesting about Alex than the man himself. Though he calls himself a laid-back person, Alex is quite the outdoors man. He enjoys riding motorcycles and playing golf. He loves cookie dough and soft, squishy pillows. When it comes to music, Alex is all ears for heavy metal. Alex is a sucker for ice cream so much that he sometimes just sits back and watches it melt. He feels he gains a greater appreciation for ice cream by doing this. Alex is also an unabashed fan of the movies. His all-time favorite movies are 300, Inglourious Basterds and Troy. Despite his taste in action movies Alex is a real softy inside. He admits he has a soft spot for kids, especially his young nephew.

There is more to the man than meets the eye. Few people know that Alex plays the ukulele really well. It is tough to match his bravery as well. Alex once pulled the door off a wrecked, burning car to pull the unconscious driver out to safety. Despite this, Alex is humble when describing his strengths which he lists as self-motivating, intuitive and loyal. He is sentimental as well regretting the lizards he captured in his childhood but never released.

For Alex from The Bachelorette, height has never come in the way of doing anything, even though the other contestants from the show made fun of him for it. Alex has earned the reputation of being something of a hothead because of bad blood between him and some of the other contestants. With all his amazing qualities, we are sure Alex will find love, even if it’s not with Jojo, who sent him home on Monday. Certainly not for his shortcomings!