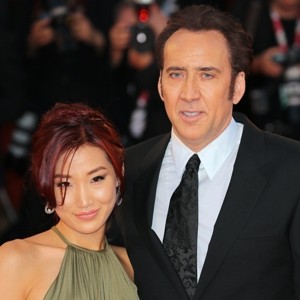 At 49, Nicolas Cage has enjoyed a pretty successful career in Hollywood, both as an actor and a producer. But he’s now pointing a finger at the industry for discriminating against a certain breed of actors. And his accusations stem from none other than Cage’s young wife, 29-year-old Alice Kim.

Cage recently wrapped up his latest film, Outcast, for which most of the crew was Chinese. When doing an interview to promote the film, Cage slammed Hollywood for not offering viable lead roles for male actors of Asian descent. “I hope that we will see more Chinese actors in American cinema, too. We do see Gong Li, Zhang Ziyi, and Chow Yun Fat, but it’s very rare to see the Chinese male actor in Hollywood movies, which is something I take great umbrage with,” said Cage. Keep in mind that his wife is Asian, Korean to be exact.

The celebrity couple has one child together, an eight-year-old son named Kal-El, and Cage’s new mixed race family is one of the biggest reasons he wants to see more opportunities for Chinese actors. “You know, my son is Asian. He may want to direct one day; he may want to be an actor like his father—and I want that to be open to him. So I want to make some kind of effort to see more of that happen in Hollywood.”

What do you think: Would Nicolas Cage be so passionate about Chinese cinema and actors if his wife wasn’t of Asian descent?

Whiteman, B., “‘I want my son to be able to act!’ Nicolas Cage hopes to see more Asian actors in Hollywood as he flies home from filming Outcast in China,” Daily Mail web site, October 24, 2013; http://goo.gl/c79Bbn.