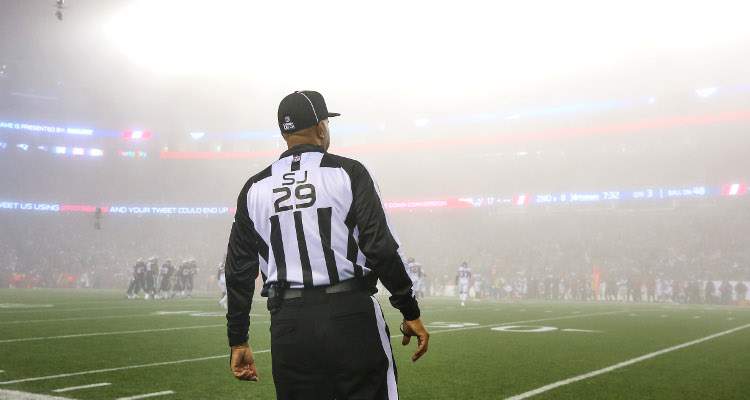 An NFL referee’s job is not easy. They have to constantly deal with players, team, staff, TV analysts, and throngs of emotionally-invested fans questioning their every decision. For putting up with opinionated fans, referees deserve every penny of their salary! But just how much do NFL referees make?

We’re Week 10 into the NFL season and things are getting intense. Every time a referee blows a call, there are at least a dozen people contesting the decision. Everyone likes to pretend they’re referees as they watch games at the edge of their seats. But NFL’s official source reveals that the referees who are made out to be pinstripe-wearing evil overlords have a 95.9% precision level. With such an accuracy level mere NFL viewers can’t boast about, the referees deserve worthy compensation. What’s an NFL referee’s salary? Here’s what you need to know.

We may love arguing with a referee’s decision through our TV screens, but football fans can tell when the officiating accuracy is off the mark. If memory serves, many would remember the 2012 NFL referee lockout.

The league and the NFL Referees Association couldn’t agree on a collective bargaining agreement. It resulted in the lockout of the referees association while the NFL hired replacement officials to officiate the 2012 season.

FYI, officials and referees aren’t the same. Officials are a crew of seven people that work a single game. Umpires, down judges, line judges, field judges, side judges, and back judges, as well as referees, each have unique responsibilities laid down by officially by the league.

Three weeks into the lockout, things weren’t looking good for the league. The scab referees (sports jargon for the replacement refs) were inexperienced. The association argued that by locking them out, the league wouldn’t be able to find referees who could adjust to the speed and precision of an NFL game or enforce player’s safety rules. As it turned out, the referees association was right.

The messiest example was a game between the Green Bay Packers and Seattle Seahawks in Week 3. You’d have to watch the fiasco caused by the scab referees peeking between your fingers. The NFL was flooded with criticism by football fans for the mismanagement.

The botched game was the league’s wake up call. The NFL and the union came to an eight-year agreement. According to the terms of the agreement, there were changes in the pensions, and refs had retirement benefits as well as incremental wage increases. The agreement served both parties well, but particularly the referees.

On average, referees earned a $173,000 salary in 2013. That amount is set to increase to $201,000 in 2019. The league has a payment-per-game system in addition to a flat base-rate. The NFL also pays overtime. Refs earn generous compensations for officiating post-season games.

Note that referees work for only half the year, the duration of the NFL season. Many of them have other jobs in the off-season. The refs attend functions and practices and stay updated with the rulebook to keep their skills sharp.

Some would argue the referees association was greedy and deserved the lockout. But the ensuing mishaps proved that their jobs aren’t easy. The agreement, which included a higher pay scale and pension benefits, cost the league approximately $3.2 million, a small drop in a bucket to an organization that operates in billions.