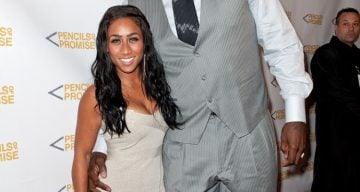 Where is Hoopz now? We have no problem finding Tiffany “New York” Pollard due to her appearances on several of her own reality shows since Flavor of Love ended, but many still wondered about the girl that got away, Nicole “Hoopz” Alexander. What does Hoopz look like now? What has she been up to? If you want help filling in the blanks, then we have what you need!

Who is Nicole “Hoopz” Alexander?

She’s best known as a television personality after appearing in a couple of VH1’s reality TV shows. She was first a contestant on Flavor of Love in 2006, where she was crowned the winner of the season and earned herself the nickname “Hoopz.”

She then appeared on I Love Money in 2008, another one of VH1’s hit reality series. As luck would have it, Hoopz ended up winning that show, too! She pocketed a cool $250,000 as the top prize, as well as the fame she earned from the show. (It’s pretty hard not to fall in love with her!)

Oh, you didn’t know? The NBA legend and reality star dated back in 2010 and were quickly engaged after meeting! But that didn’t last long; the two split up in 2012. Luckily, they will always share their love of basketball!

In her most recent reality series, It Takes A Sister (which she produced, starred in, and narrated with her four sisters), Hoopz talked about her breakup with O’Neal.

“Break-ups are especially hard, when someone is painting you a fairy tale, but turns out you’re not the one in it. But at the end of the day, I believe everything happens for a reason.”

If you want to catch up with the reality star, then you can head over to her personal Instagram account. She has several pics of herself, her family and her travels. Fans often reach out to her for her time on Flavor of Love but also to greet or compliment her. If you have something you want to say to her, then head over to her social media outlets and ask away!

What Is Hoopz Doing Now?

Since being on Flavor of Love, Hoopz has been keeping busy, as you can tell by her Instagram posts. She’s also best known for her work on her family reality show, It Takes A Sister, which she said was challenging.

“Yes, it’s so much harder because you are essentially everything: I’m the narrator, the producer, I’m the talent – the sister, the aunt, I’m the breadwinner,” she said to VH1 in an interview. “I’m running a business. I’m in a relationship, trying to start another one. There were just so many elements to who you are and when you are doing a challenge show, obviously there is one goal, so you don’t see all of those sides to people.”

When asked if it was hard to have her family in front of the camera, she said: “No, they’re so crazy and they’ve been ridiculous. Some of the crew was worried like maybe they weren’t ready and I was like, no, we are going to be who we are regardless and they were so shocked. I been with my family and the kids for a long time so I brought them along with me and it’s nothing that they’re aren’t used to. It’s not just completely brand new for them.”

Hoopz has an upcoming summer movie called First Lady. It’s about a Harlem, New York drug dealer’s wife, who has to take over the business when her husband, Mike, dies. “But her discovery behind the people responsible for Mike’s death threatens to unravel everything.”