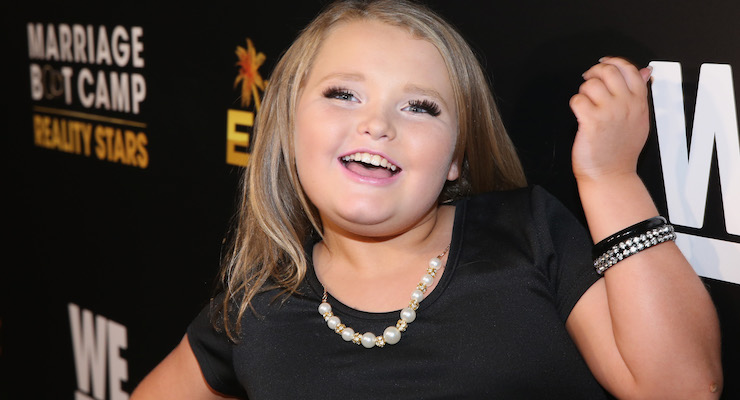 What does Honey Boo Boo look like now? It’s been five years since her hit show aired on our TV screens and now fans want to know about Honey Boo Boo today! Would we “redneck-ognize” the former pageant star if we saw her on the street? For more details, here’s a look at Honey Boo Boo now.

Where Is Honey Boo Boo Now?

Alana Thompson got her claim to fame by starring on the hit TLC show Toddlers & Tiaras but eventually swapped her crown for a banjo, showing off her family adventures and saying words that required subtitles. Some still need those subtitles when they hear her years later! Honey Boo Boo’s age is 11, and we can’t believe how young she was when she started. If we’re comparing Honey Boo Boo then and now it seems not much has changed —except that she’s not on TV or making many headlines anymore. Naturally, she looks a little older and even a little taller but other than that, she’s the same sassy kid she always was. Aside from being on Marriage Boot Camp with her parents, the world hasn’t seen much of Honey Boo Boo in 2017.

Mama June: From Hot to Not featured the matriarch’s comeback to TV and her weight loss of 300 lbs! The show recorded her weight loss journey and how she learned to eat better and feel better about herself. She still worries about her children’s health but is no longer forcing them to do something they’re not ready for.

“I do worry about their health, but I’m not going to say, ‘You got to eat salads all the time,’” Mama June explained to People. “I’ve seen Pumpkin and Alana lose and gain weight, but I don’t want them to end up like I did at 460 lbs. Who would want that?”

Her Mom Wanted Her on TV Again

A source at Hollywood Life said: “Now that June is firmly committed to eating a healthy, balanced diet herself, she’s keen to get her kids on board. It helps that it would make for a great TV show, too!”

“Alana is super against the new TV show,” the source continued. “She doesn’t want to lose weight, or to start eating salads and exercising. She’s quite happy the way she is, thank you very much. But, June is pretty determined, and where there’s a will there’s a way.”

Alana already told her mother she was against the idea, but like most parents, Mama June couldn’t help but revisit the subject. Her back up plan was to land a role on Dancing with the Stars, but that never happened. We’re not convinced we’ve seen the last of this little chicken nugget, as it’s evident her mother loves being on the fame train! (For now, we may just have to hope and pray for a Here Comes Honey Boo Boo reunion show!)

be happy yall! read the shirt!!! we are all doin well here and uncle poodle is gettin married!!