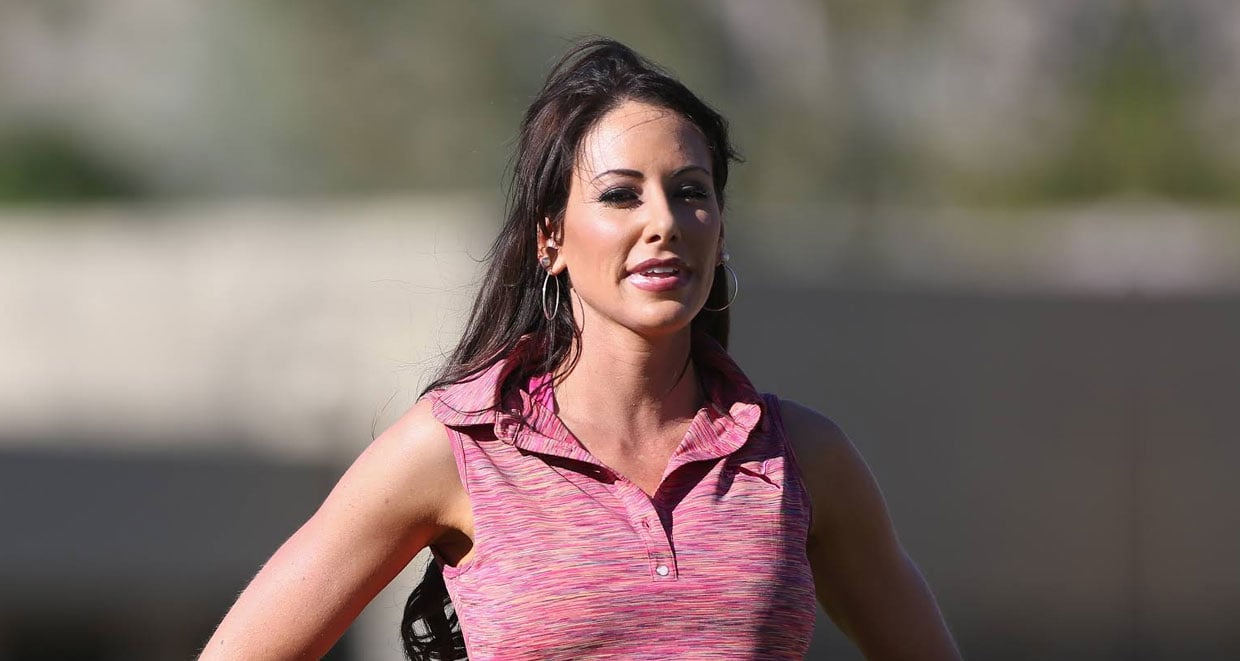 Holly Sonders is a Fox Sports reporter who covers golf. She switched from the greens to the comfort of a studio, but she certainly didn’t leave the world of golf! Her knowledge and passion for the sport coupled with her gorgeous persona have made Sonders a popular face on the course.

Fox Sports’ Holly Sonders is one of the most noticeable faces in golf coverage today. She’s also packed with incredible knowledge about the game and endless wit. But her popularity doubled overnight with a funny gaffe she had on air!

For those who don’t follow golf, Holly Sonders, age 31, had a slip of tongue where “sectional qualifying” turned into “sexual qualifying.” Her little oops moment on live TV has turned the spotlight on the former golfer.

Learn more about this fascinating woman with details from Holly Sanders’ wiki.

The Swing of a Spartan

Born Holly Niederkohr on April 3, 1987, she changed her last name to Sonders during her professional career. She hails from Marysville, Ohio where she lived with her parents, Dan and Sandy Niederkohr.

Sonders held a passion for golf from a young age, which led her to win her first tournament at only seven years of age.

In high school, she earned all-league and all-district honors for four years and was named league and district MVP. She was also a four-year letter winner in basketball and first-team all-league honoree in track as a freshman in high school.

Sandy Niederkohr played golf and was club champion for over two decades. Sonders followed her mother’s footsteps and chose to completely devote herself to golf over the other sports she played.

She won a scholarship to Michigan State University where she majored in journalism. She won multiple titles and honors in golf for the Michigan State Spartans, earning Academic All-Big Ten honors.

Sonders entered her senior year with a 78.47 career stroke average. She was the most experienced athlete at the university with a total of 77 collegiate rounds played, and she started all four years as a Spartan.

The golf star of the Spartans team owes her winning grit to her past as a basketball player and said, “It taught toughness–when you’re down and everything, with two minutes on the clock. I was a point guard, so my coach would just want me to drive and get fouled and shoot the foul shots. That’s kind of how it is with putts and important shots and finishing the round.”

Switching the Driver for a Mic

Sonders suffered a knee injury while playing golf when she was around 20 years old. She underwent major surgery to repair the damage and was unable to walk for months during her junior year at MSU. No longer playing like she used to, she transitioned from actively playing golf to broadcasting.

She wanted to join the Golf Channel after college, but the head honchos at the network said that she needed more experience in front of the camera. So, she joined KATV in Little Rock and worked as a reporter covering hard news beyond golf for a year.

Now armed with some diverse broadcast experience on her resume, Sonders auditioned for NBC’s Golf Channel when she was 23. Her extensive background in the game landed her a spot on Morning Drive. She hosted other popular shows like School of Golf and Playing Lessons with the Pros.

She left the Golf Channel for Fox Sports in 2014 when the network was looking for talent to cover the 2015 U.S. Open. There, she even covered the NFL games as a sideline reporter.

Sonders’ popularity even won her a major endorsement deal with Cobra Puma Golf and is often sporting their apparel on the course.

Not a Package Deal

Erik Kuselias is the lucky guy married to Holly Sonders. The TV and radio host is currently on Sports Talk 1040 in Orlando.

Holly Sonders’ husband used to be a host on NBC Sports Radio. He also appeared on Morning Drive with Sonders.

After being spotted in public together numerous times, Kuselias and Sonders announced their engagement in 2012. Many were shocked since Kuselias is much older than the former golfer and has a checkered past.

When Kuselias worked for ESPN several years ago, he was reportedly suspended on sexual harassment charges. He also allegedly cheated on his ex-wife.

Sonders and Kuselias reportedly split up briefly after they married and there was talk of divorce. However, they reconciled, and the divorce rumors were squashed.

Unlike his wife’s stellar image, Kuselias ruined his reputation for apparently trying to push himself as a package deal with his wife when Fox hired Sonders. And when Fox turned him down, he tried to push NBC to hire him and his wife.

In the end, his antics got him fired from NBC, as well.

Putting the Glam in Golf

Here we go! The 2016 edition of the Most Beautiful Women in Golf for @si_golf. Thank you for choosing me again to be a part of this…the pictures were taken at 41 North in Newport, RI…one of my favorite places in the world. Hope you guys like the pics! I'll post more here on my page #si #golfmagazine

Sonders has been named one of the most beautiful faces in golf multiple times for good reason. She was also on the cover of Golf Digest in 2013, where she impressed everyone with her fitness regime.

She’s a firm believer in not compromising fitness, style, and skills while playing. Her eye-catching activewear catches one’s attention before her swing or her interviews. Even Holly Sonders’ Instagram followers flock to her page wanting to know where the incredible outfits she wears on air come from.

During her initial days on Morning Drive, the show was criticized for seating her in the far corner where her short dresses and heels were in view. But she brushed it off as she felt that she was not being objectified in any way.

“I dress the way I dress because the style is very important to me,” said Sonders. “I love being a girl. You can be a pit-bull competitor. You can want to kick people’s asses in every sport, but you can still be feminine and still be sexy.”

Some also feel that Holly Sonders had plastic surgery as her physical appearance has visibly changed over the years. But she hasn’t acknowledged the rumors.

Taking It in Stride

Holly Sonders ran into some flak when she was covering the U.S. Open in 2015. Back then, she said they were going to cover the sport differently.

She explained, “It’s not going to be unconventional. We’re going to keep the tradition of the game but we’re going to do it in a new and fun way.”

Sonders interviewed then-U.S. Open champion, Jordan Spieth. And to make it fun, she asked him if he carried a fifth outfit.

That, however, invited a lot of criticism against her on social media. But she took it in stride with a single tweet.

And for those of u hating on my interview w/ Jordan..It's appropriate to end with a smile. He's the US Open champ! Lighten up folks 🙂

Nevertheless, she was reassigned from her job as an on-field interviewer to that of a post-game host. While Fox claimed it was because she couldn’t handle both, something related to the criticism may have prompted Fox to make that decision.

Sonders has a word of advice for her Twitter followers who love to criticize her and said, “Funny or clever comments made here will get funny or clever responses.”