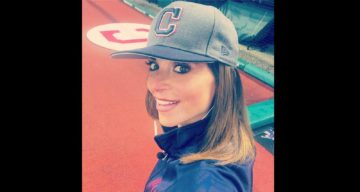 Hollie Strano is not an unfamiliar name in Ohio. The charismatic weather girl has been brightening up Cleveland’s Channel 3 for a while now, and is quite popular with the viewers. That’s why when the WKYC-TV personality had a health scare in 2019, the viewers were very concerned about her return. Now Strano is back and as charming as ever. Our Hollie Strano wiki celebrates this awesome news personality and her comeback.

Hollie Strano Is from Ohio

Hollie Strano was born on December 3, 1972 in Lyndhurst, Ohio on the east side of Cleveland. Her parents, Mike and Joni Strano, raised Hollie; her brother, Michael; and sister, Stephanie there.

Hollie’s siblings and parents are all based in and around Cleveland. They feature on her social media, but Mama Joni is well known to WKYC viewers for sharing the Strano family’s holiday recipes.

Strano Is a Certified Meteorologist

Hollie Strano graduated from John Carroll University with a degree in communications, and also studied in their television program. She went on to attend Mississippi State University, where she acquired a degree in meteorology.

Strano has the “Seal of Approval” by the National Weather Association. This certifies that the TV personality is competent at both basic meteorology knowledge and on-air performance.

Hollie joined the NBC-affiliate WKYC station as a meteorologist on Channel 3 News. She is a morning show anchor on 3GO from 4:00 a.m. to 7:00 a.m. and later does weather and news cut-ins for the Today show on Channel 3.

She also hosts the midday talk show, Live on Lakeside. Hollie’s weekday schedule is always packed with work, yet she never fails to be engaging.

Strano has won several awards and honors for her work, but none compare to the adoration she gets from the people of Cleveland.

Strano Is a Mother of Two

Hollie Strano has many roles, but the role she loves the most is being a mom. She has a daughter, Jessica Toohig, and a son, Grady Toohig, from her first marriage.

We had such a special evening celebrating 🥳💞 Jessica’s birthday last night in 1 of our FAVORITE gems in NE Ohio, @littleitalycle ! 🇮🇹🎉♥️ THANK YOU for your sweet words to Jess! Means so much to this mommy! 💝 Have your best Wednesday and pass the coffee ☕️ please! 😘 #blessed😇💖 #grateful🙏 xoxo 💋

Strano was married to her high school sweetheart, Brian Toohig. They were together when they were students at the Notre Dame-Cathedral Latin School in Chardon and Walsh Jesuit High School in Cuyahoga Falls.

They divorced in 2011, and it seems that the kids spend a lot of time with Hollie. They often feature on her social media, too.

She met Alex Giangreco, a Buffalo native and a mixologist by profession, in 2010 while on vacation in Fort Lauderdale, Florida. That was the location of their intimate sunset beachside wedding ceremony on June 15, 2014, before a grand reception in Cleveland.

Strano and Giangreco’s marriage didn’t last, however, and they divorced in 2017. Sadly, the second divorce took a toll on Strano’s mental health.

She has been vocal about struggling with anxiety and mental illnesses. She even supports related organizations and helps spread awareness about mental health.

Strano’s mental health issues spiraled into severe anxiety after her divorce. “I went through a really traumatic divorce,” she said. “I felt like, in a sense at first, that I had failed, so it was really hard for me to understand and come to grips with what was going on.”

She suffered from shortness of breath and panic attacks at that time. In November 2019, she had to take a few days off work when the anxiety got worse.

Her friends and family had been very supportive. But for the sake of her children, she decided to seek counseling to cope with the anxiety.

Hollie returned to Channel 3 in a few days, and said she was doing a lot better. Her fans were glad to see her back on television.

She opened up about this difficult time for her on Live on Lakeside, to encourage more people who are also struggling with mental health issues.