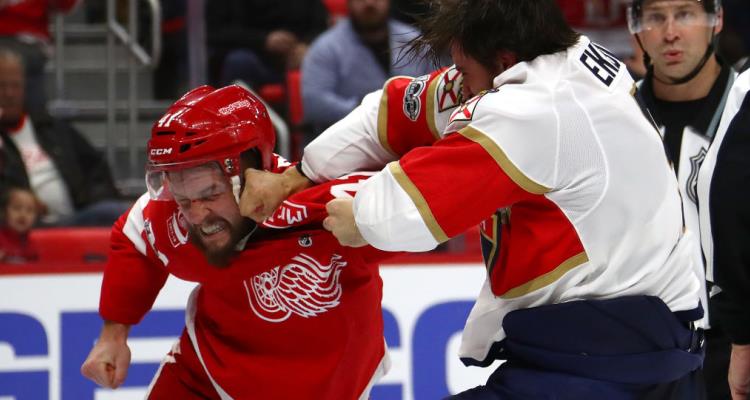 Ice hockey is known to be a very rough sport on the athletes playing the game. But what makes it even more difficult for players is that there is the possibility of being involved in a fight! Fighting has been a long tradition in the game of ice hockey and is seen across various levels of the game; from amateur leagues, all the way up to professional games, it’s rare you see a hockey game without at least one fight! Players that are involved in ice hockey fights are often known to have a bad repetition and are known as “enforcers” on their respected team. With this said, many wonder, why are hockey players allowed to fight? What are the penalties and repercussions of being involved in a fight? These questions and more will be answered below!

Why Is Fighting Allowed in Hockey?

Ice Hockey is known as a very physical game with hip checking, cross-checking, or body checking occurring almost every play. This could easily translate into player’s emotions being stirred up and seeking revenge through a fight. Fighting is allowed in the North American hockey leagues, where the same can not be said about the Olympics, European Hockey leagues, and the NCAA, which disallow any sort of fighting without severe punishment.

Fighting is allowed because it helps attract higher viewership numbers through media sources and helps with more seats being filled in an arena. Also, fighting allows teams to have a strong bond within the locker room. An example would be a fighter (or enforcer) on the team will start a fight without another rival team to send a message to the team and the league. There are other instances; an enforcer will start a fight to seek revenge from something in the past. These are often the storylines that leagues are looking to promote to attract more revenue and interest in the game.

History of Fighting in Ice Hockey

The NHL was the first to introduce fighting in its league with Rule 56. (Yes, there are hockey fight rules.) This rule resulted in players involved in a fight receiving a five-minute penalty, rather than being ejected from the game. Eventually, this rule was used by other amateur North American hockey leagues.

Hockey Fighting in the NHL Today

In today’s game, penalties and punishments related to fighting in a game is applied by using Rule 46. This gives the referee the ability to use their own judgment towards a player that has been involved in a fight.

What Are the Penalties and Repercussions of Being Involved in a Fight?

Fighting in ice hockey will result in punishment for the fighters involved, but depending on which league, the repercussions will differ. Punishments towards players are separated into two different categories: North American punishments and European/Olympic punishments.

Players involved in a fight in the NHL, American Hockey League (AHL), ECHL, Southern Professional Hockey League, and other major and minor leagues in North America enforce a five-minute penalty for fighting.

If a player were to leave their bench or use a weapon (helmet, skate, gloves, or hockey stick) and start or join a fight, there is an automatic ejection and the possibility of a suspension and fine.

If a hockey player were to be involved in three separate fights in one game, it results in an ejection to the player. A coach could also be suspended if their player leaves the bench to start or join a fight. This includes stick fights.

This would result in a player intentionally taking his gloves off, being ejected, and receiving a 10-minute penalty for their team.

If a player continues fighting after a referee has said to stop, it could result in an ejection and a five-minute penalty. In addition, a player would be ejected from a game for intervening in a fight that is in progress.

A player that starts a fight would be ejected and receive a five-minute penalty for their team.

In the NCAA fighters are immediately ejected from a game and could be suspended. The suspension will depend on previous fights during the season. For instance, if it is the first fight of the season, it would result in there being a one-game suspension for the player.

If it’s the second time a player has been involved in a fight in the season, it will be a two-game suspension in place.

Having an “Enforcer” as a Teammate

A player that consistently finds themselves in a middle of a fight would be known as an “enforcer” (often called a “goon,” as well.)

Many times, these players are intended to frustrate the other team’s superstar players. This often results in the opposing team making an adjustment to their line-up to ensure that there is a more aggressive player on the ice when the opposing enforcer is on.

Therefore, enforcers are used as more part of a strategic player in the line-up.

Will Fighting in the NHL Last?

We don’t see fighting in the NHL going anywhere. Not only does it increase viewership and interest in the game, hockey just wouldn’t be the same without it!

Since there has been fighting in the NHL for nearly a century, it’s highly unlikely it will disappear from the game.

If anything, there will be adjustments made to the rules surrounding fighting and the penalties that impact the players. There is a great possibility that North American leagues will ensure that players are safe when involved in a fight. This could be rolled out by training referees, since they are at the front of the line in any fight.