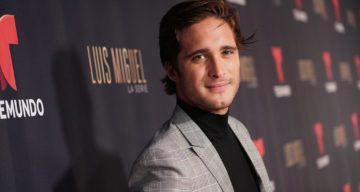 Hispanic Heritage Month (September 15 to October 15) is here! To commemorate this momentous occasion and celebrate Latinx culture, we want to highlight the contributions that young Hispanic artists have made to the entertainment industry.

We’ve all heard of the likes of J.Lo, Danny Trejo, Sofia Vergara, Pitbull, and other famous Latinx performers. Now it’s time to talk about some up-and-coming Hispanic stars that you may have seen in a few projects here and there, but might not know by name.

Representation of all cultures across various media platforms, including music, television, and film, matters. While other cultures have seen a significant rise in on-screen and behind-the-scenes representation, there’s still a huge gap that needs to be filled by the Latin community.

By highlighting the accomplishments of these lesser-known young performers for Hispanic Heritage Month, we hope to encourage and inspire more artists of Latin descent to pursue careers in the arts.

Rachel Zegler is a talented singer, actor, songwriter, and YouTuber. Zegler was raised in New Jersey by her American father and Colombian mother. She has an older sister who is studying to become a journalist.

Zegler first gained popularity on her YouTube channel back in 2018, when she posted her bathroom rendition of Lady Gaga’s hit song, “Shallow,” from the most recent film adaptation of A Star is Born. She will get the opportunity to showcase her unique singing and acting ability to a much larger audience as Maria in Steven Spielberg’s upcoming remake of West Side Story. Zegler was one of 30,000 actors to audition for the role on a digital platform.

The film was originally set to be released on December 18, 2020, but production was delayed due to the COVID-19 pandemic. The new release date is December 10, 2021.

the Sky is trembling

This accomplished Uruguayan-Spanish-American actor and dancer has a few other notable acting credits to her name as well. She appeared in Jane the Virgin starring Gina Rodriguez, Beautiful & Twisted (2015), and the sitcom Instant Mom.

Just another day on set with Josh and John! Always great working with you two! #fullerhouse #season5

Ana de Armas is a Cuban-Spanish actress who was born in Havana, Cuba on April 30, 1988. As a teen, this fresh-faced Latina beauty gained popularity in Cuba for her leading role in the Cuban romantic drama film, Una Rosa de Francia (2006).

Since moving to the United States, her career has been on a continuous upward trajectory, with feature films like The Night Clerk (2020), co-starring Hollywood legends John Leguizamo and Helen Hunt, to her name. Other notable film credits include Knives Out (2019), Blade Runner 2049 (2017), War Dogs (2016), and the latest installment of the James Bond franchise, No Time to Die (2020).

Armas is currently dating Ben Affleck, and it was recently reported that she’s going to move into his $20.0 million Hollywood “dad pad.” According to an insider source, Affleck plans to propose to his long-time girlfriend in the near future! Exciting stuff!

Allegra Acosta is one of the youngest entries on our Hispanic Heritage Month top 10 list. She was born on December 12, 2002 in El Paso, Texas. Acosta caught the acting and singing bug at a very young age. After realizing how talented she was, her family moved out to L.A. so that she could pursue a career as a singer and actor.

trying to get in-tuned

Although she’s still in the beginning of her career, this up-and-coming Latina star is already making a name for herself in the entertainment industry. She’s a maven of the small screen and has appeared in hit series like 100 Things to Do Before High School and critically acclaimed shorts including One Halloween (2016) and American Girl (2016).

She’s best known for her role as Molly Hernandez in the Hulu series, Marvel’s Runaways (2017-2019). We’re excited to see what the future has in store for this extremely talented young actor!

A dead ringer for Selena Gomez according to some, Melonie Diaz is a New York City-born-and-bred Latin American actor best known for her leading role as Mel Vera on The CW’s reboot of Charmed. She is of Puerto Rican descent. Prior to starring on Charmed, Diaz was mostly known for her starring roles in independent films such as A Guide to Recognizing Your Saints (2006) and Fruitvale Station (2013), which she starred in alongside Michael B. Jordan.

Nominated for several awards throughout her career, including a Teen Choice Award in 2019 and two Film Independent Spirit Awards, Diaz also has an extensive career on the small screen. She appeared in Lena Dunham’s HBO hit, Girls, and she’s made several notable TV appearances in addition to that.

Professionally known as Marcel Ruiz, this young Puerto Rican actor got his big break in the industry when he was cast in the role of Alex Alvarez on Netflix’s reboot of the classic show, One Day at a Time.

Born in Puerto Rico’s Old San Juan region on July 9, 2003, both of Ruiz’s parents are veteran filmmakers, and they introduced him to the medium from a very young age. Ruiz has two other acting credits to his name—a minor role in the FX series, Snowfall, and a starring role in the 2019 critically acclaimed film, Breakthrough, which was based on a true story. We hope to see more of Ruiz in upcoming feature films!

Jason Genao is a Dominican-American actor who was born on July 3, 1996 and raised in Jersey City, New Jersey. He has several well-known acting credits to his name, including an appearance on Law & Order: SVU in 2016. He also played Napoleon in the Netflix series, The Get Down, which is about a group of misunderstood teens running amuck through the streets of 1970s New York and getting into trouble. Genao’s most well-known and critically acclaimed role is on another Netflix series called On My Block, which is expected to return for a fourth season sometime in 2021.

I really got stuck in the U.S corona count your days

He’s not necessarily a household name in the United States or Canada, but Diego Boneta is a famous and beloved singer, songwriter, and actor in Mexico and South America. Born in Mexico on November 29, 1990, he’s released two studio albums over the years, but has also contributed his musical talents to the film and television projects he’s worked on throughout his career.

His debut self-titled album, Diego, was released in Chile, Brazil, and Mexico in 2005 before becoming available as a digital download in the United States a year later. Boneta achieved massive musical success when the first single on the album, “Responde,” was released in various Latin American countries including Brazil and Argentina.

Boneta released his second studio album, Indigo, in 2008 and it also garnered massive success for him, featuring the Spanish and English singles “Perdido en Ti” and “Losing Me.”

Around the same time his music career was taking off, Boneta was also making a name for himself on the small and big screens with appearances in Pretty Little Liars, 90210, Scream Queens, Mean Girls 2, Another You, City of Dead Men, and The Dovekeepers, to name a few.

Boneta’s biggest film break came in 2012, when he was cast in the lead role of Adam Shankman’s film adaptation of Rock of Ages at the age of 22. Most recently, Boneta starred as the title character in the Spanish-language American biographical series, Luis Miguel: The Series, which was recently renewed for a second season on Netflix.

Born Juan Carlos Ozuna Rosado on March 13, 1992 in San Juan Puerto Rico, Ozuna is a beloved reggaeton and Latin trap recording artist. He’s worked with some of the biggest names in the industry, including Selena Gomez, Jennifer Lopez, and Cardi B, and has released numerous chart-topping hits.

Ozuna has sold approximiately 15 million albums worldwide. This not only makes him one of the best-selling Latin entertainers of all time, but it’s also garnered him five Billboard Music Awards and 12 Billboard Latin Music Awards throughout his career.

Ozuna also holds four Guinness World Records, and he was included in Time Magazine’s list of the 100 Most Influential People in 2018. That same year, Ozuna made his acting debut in Que León, a Spanish-language romantic comedy about a couple who share the same last name but polar-opposite social statuses. Further enhancing his acting career, Ozuna is set to appear in the action/adventure/crime thriller movie, F9, alongside Charlize Theron, Vin Diesel, and Jordana Brewster in 2021.

Born in Santo Domingo on January 21, 1996, Lendeborg moved with his family to Miami, Florida when he was four years old. He appeared in his first feature film, The Land, in 2016 and has scored a steady stream of coveted acting roles since then.

Lendenborg also appeared in two Marvel Cinematic Universe superhero movies, Spider-Man: Homecoming (2017) and Spider-Man: Far from Home (2019). Other highly acclaimed film projects include the Transformers spin-off, Bumblebee (2018), and Alita: Battle Angel (2019), and he has a recurring role in the Hulu series, Wu-Tang: An American Saga.