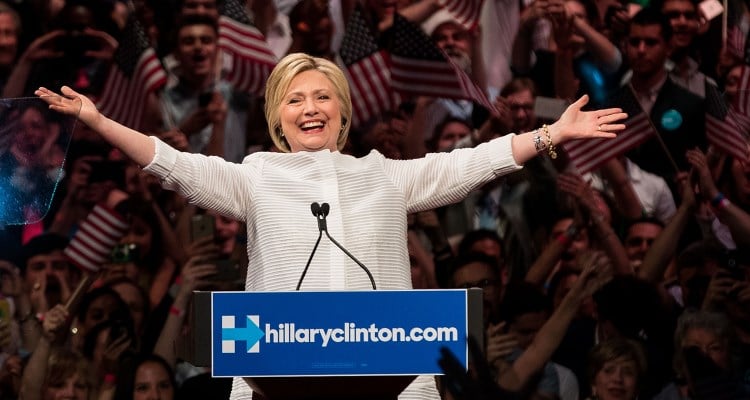 Hillary Clinton’s wiki page was vandalized on Thursday (October 13). At the top of the Wikipedia page, a bright yellow box featured a message insulting those who plan to vote for Clinton, positioned over a pornographic image. The presidential candidate has also suffered numerous threats, including the Hillary Clinton WikiLeaks threat issued by Founder and Editor-in-Chief, Julian Assange. He threatened to release material that could destroy her standings in the race. Despite it all, Clinton refuses to quit and continues to work towards winning the election. For more information on the candidate, including Hillary Clinton’s net worth, Hillary Clinton’s height, and Hillary Clinton’s age, we’ve got the facts.

Wikipedia Hack: On Thursday, those who searched for the candidate or Hillary Clinton’s husband, former president Bill Clinton on Wikipedia, were met with a disturbing surprise. The text written over the pornographic image of a woman’s behind read:

“Voting for Hillary Clinton this November means proving how much of a spineless, boring **** you are. Nuclear war will be inevitable, as will be Bill Clinton raping more women and children. Save the America you know and love by voting Donald Trump. Also girls send a** pics to [redacted]. This message has been brought to you by [redacted] and the [redacted] association of America. Thank you for your time.”

The page was quickly restored back to its normal state, but not before many viewers and media outlets saw the malicious post.

WikiLeaks Emails: Recent evidence announced earlier this week proved that Hillary Clinton’s interview with Chris Hayes on MSNBC was scripted. Threats from WikiLeaks directed at Clinton have been looming over the presidential candidate for months, and the emails are continuing to trickle out. Assange, told Megyn Kelly on The Kelly File (Fox News) in late August 2016, that his team was working “around the clock” to verify the material they had, that could potentially destroy Clinton in the polls if it “catches fire” in the media. If the American people see Clinton as someone who lacks authenticity and sincerity, it could harm her in the polls. That being said, Donald Trump has his own dirt to deal with. With the final decision only a few weeks away and all this dirt piling up, it will be a tough decision for many Americans to make.

Daughter’s Support: Hillary Clinton’s daughter, Chelsea Clinton, went to Pittsburgh on Friday (October 14) to speak at a gathering of the city’s women, on behalf of her mother. The event began at 11:45 a.m. EST at the Rivers Club downtown. She also visited the University of Pittsburgh at the O’Hara Student Center at 2:00 p.m. EST to speak about the election’s potential impact on women, among other issues. Clinton may be receiving criticism from some voters, but her family and supporters continue to stand by her side.

Hillary Clinton was born October 26, 1947 (age 68) in Chicago, Illinois and stands at 5 ft. 5 in. She represents the Democratic party and has been married to Bill Clinton since 1975. The couple has one daughter, Chelsea. She’s worked as the Secretary of State, the U.S. Senator from New York, the First Lady of the United States and the First Lady of Arkansas. According to Money Nation, Clinton’s net worth is $31.3 million dollars!