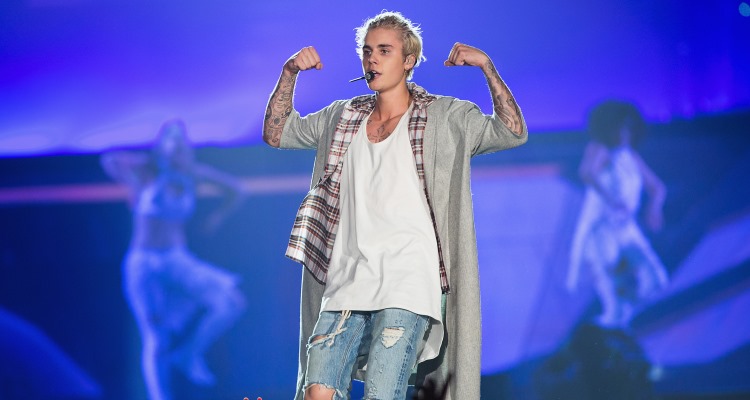 Justin Bieber’s Barcelona trip quickly went downhill–as much as fans love the Biebs, they learned the hard way to respect his boundaries. While the Canadian-born singer was being driven away after his Purpose World Tour show in Palau Sant Jordi in Spain, a fan stuck his hand into the back seat window and attempted to touch Bieber’s face.

Justin Bieber punched the fan, leaving him with a bloody lip and TMZ caught the whole thing on camera. Why did Justin Bieber punch a fan in Barcelona? The video shows the fan saying, “I touched his face like this [motions] and he went, ‘Boom,’” in Castilian Spanish. Perhaps this event serves as a cautionary tale to fans: Touching celebrities without consent is harassment and stars like Bieber won’t tolerate it one bit!

Based on most comments, fans are siding with Bieber, saying it wasn’t right for a fan to touch the star’s face while the car was moving. Others chose to blame the media for painting a bad image of Bieber when he was only defending himself, saying he reacted the way anyone naturally would. Although punching someone in the face is not the best solution to deal with harassment (the fan was left in shock, nursing a bloody lip), it certainly got the point across. In the video shown below, Bieber was enjoying his ride through the crowd, until the crazed fan stuck his hand in the car. Bieber’s facial expression appeared to show that he did not intend to hurt the fan, but was shocked and angered by the invasion of his personal space. Watch the video below to see for yourself.

According to Capital FM, the local police reported the following, “What’s occurred here is what would be considered a misdemeanour rather than a crime. For a crime of assault to have occurred, the victim would have needed medical attention more than once… This is an incident that occurred between two people and the person who received the punch or push will have to make a formal complaint if he wants to take the matter any further.”

Bieber has had a rough time with his fans ever since his fame began to get out of hand. Back in 2013, a “Cut for Bieber” fan-started campaign was initiated, encouraging “Beliebers” to cut themselves to protest his marijuana allegations. More recently, he stormed off stage in Manchester, UK after pleading for the crowd to stop screaming so he could speak. When he returned to the stage, he said, “The screaming in these breaks has got to stop. Please and thank you. I don’t think it’s necessary when I’m trying to say something and you guys are screaming.”

Bieber’s representatives have not yet commented on the event in Barcelona, but it seems what the singer really needs is for his fans to chill out and treat him with respect like a normal person. Let’s hope Justin Bieber’s 2017 shows are much better than the rough time he had this year!