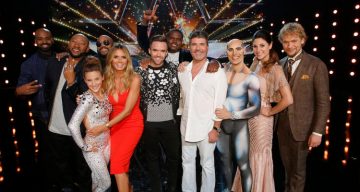 They made it! 10 acts made it to the America’s Got Talent 2016 Finals. At last, the stage is now set for a final showdown between the acts to win the top prize in this contest. The America’s Got Talent 2016 finalists are all quite different, performing a variety of different styles of talent that bring diversity and innovation to the show. While some of the acts are homegrown in the U.S. like Grace VanderWaal, other acts have come from other ends of the globe, like Tape Face. We are going to tell you which 10 acts made it to the AGT 2016 finals. If you don’t want to know who got sent home, don’t read anymore. We don’t want to spoil your suspense!

The Best of the Best

On Wednesday night five acts were sent home, leaving 10 acts to battle it out for the top prize of $1.0 million! America’s Got Talent top 10 include five singers, one magician, a mentalist duo, a juggler, a contortionist and a comic mime act. They have all impressed the judges and the audience over the last few weeks with their stellar performances on the show. The ages of the remaining contestants range from very young (teenagers) to full grown adults. The America’s Got Talent results will depend solely on their performances now.

Sal Valentinetti is one of the singers who made it to the finals. He is a jazz singer. When he is not singing he works as a pizza delivery man for his cousin in New York. His ambition is to bring back Dean Martin style roasts. His nickname is ‘Sal the Voice.’ Another finalist is Tape Face who has come all the way from New Zealand! Tape Face is a prop comic, busker and mime, now living in London. He always appears with a tape over his mouth, hence his name. He makes people laugh by performing live in front of audiences and fans.

Another finalist is Jon Dorenbos, the pro-footballer turned magician. Dorenbos has performed his magic act in Las Vegas and Hollywood. He amazed the judges when once he predicted what the four judges would draw, even before they drew it! Beat That! Then there is the singing sensation, the adorable, talented Grace VanderWaal, who has stolen hearts with her incredible voice and original songs. She writes and creates the music for her songs and is being touted as the ‘next Taylor Swift.’ She’s America’s little sweetheart, and their certainly rooting for her!

Another singing sensation is the 13-year-old opera singer, Laura Bretan. Though she started off with learning Disney’s Sleeping Beauty song, she soon branched off into opera, and her vocal range is simply incredible. The four member singing band, Linkin Bridge also made it to the finals. Their families, friends and residents of their hometown in Louisville are celebrating their success every step of the way. And can anyone even attempt to do what contortionist Sofie Dossi does so easily? She can bend backwards and paint her toes and shoot arrows with her feet, as well! The Clairvoyants continue to confound everyone with their mind boggling mentalism acts. The mentalists from Austria have read minds and got everyone trying to decipher their secrets, and the judges are stumped everytime!

Brian Justin Crum also made it to the finals. The talented singer hopes to inspire the LGBT community with his performances, that have already won him a huge fan following. The juggler from Ukraine, Viktor Kee also made it to the top 10. Though he initially wanted to be a ballet dancer, he eventually found his calling in jugglery.

The stage is set for a final showdown between these 10 acts who hope to win the top prize. We hope your favorite act made it! Even if it didn’t, don’t miss the America’s Got Talent finals. It’s going to be one hell of a show!