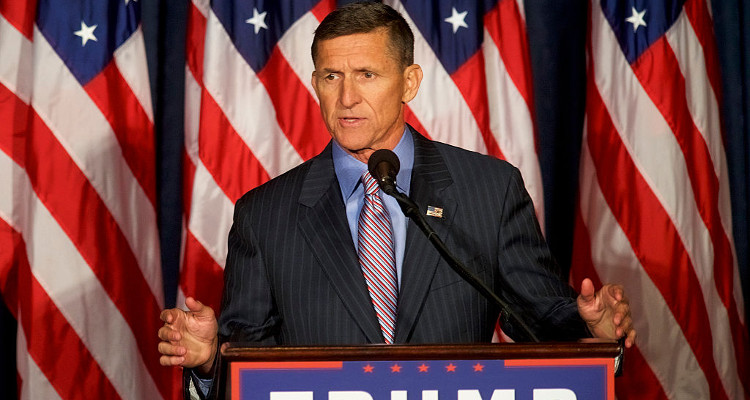 Retired U.S. Army Lieutenant General, Michael Flynn is the top candidate to join Donald Trump’s cabinet as National Security Adviser. Here are some facts to know about him.

President-Elect Donald Trump may have a National Security Adviser in retired three-star general, Michael Flynn. Flynn is one of the army generals announced for potential positions in Trump’s cabinet. Trump is considering appointing retired army personnel to his cabinet, as opposed to senators and governors. So, Flynn and his experience in the defense field make him a viable candidate. Here are some must-know facts about Michael Flynn, including details on his wife and sons.

Flynn was one of nine children to Helen Frances Andrews and Charles Flynn. His mother worked in real estate, and his father was a banker and a World War II veteran. He graduated with a Bachelor of Science in management science from the University of Rhode Island, and was a Distinguished Military Graduate of the Reserve Officers’ Training Corps.

He also has an MBA in Telecommunications from Golden Gate University, a masters degree in Military Art and Science from the United States Army Command, and General Staff College, and a Master of Arts degree in National Security and Strategic Studies from the Naval War College. He has also completed Military Intelligence Officer courses.

He has won several awards, both from the military and civil awards. He’s authored a book The Field of Fight: How We Can Win the Global War Against Radical Islam and Its Allies that was released this year. Michael Flynn’s net worth is currently not known.

2) He Married His High School Sweetheart

According to an article about the Flynn family on the University of Rhode Island’s web site, Flynn married his high school sweetheart, Lori Andrade, and the two have been together for more than three decades. The couple have two sons, Michael Flynn Jr. and Matt Flynn.

Flynn had some beautiful words for his wife saying, “Lori has been a steady presence in the lives of thousands of soldiers and their families during my numerous deployments and has played the role of not only mom, but dad, coach, teacher, and at times, taxi driver for our two sons, Michael and Matt, as well as for hundreds of other children. She’s always willing to volunteer her time for others.”

3) He was Director of The Defense Intelligence Agency

Flynn announced his retirement from the D.I.A. in 2014, a year before the scheduled end of his term. His abrupt decision to leave was alleged to be a forceful removal, because Flynn clashed with some top officials over the management and vision of the agency. He has repeatedly opined that the Obama government has hidden the true extent of the terrorism threat.

4) He is a Lifelong Athlete

Even at 58 years, Flynn is very active in sports. He’s a surfing enthusiast and a skateboarding fan. He and his brother played basketball, football, and baseball. While in Rhode Island University, he was often found in the Keaney Gym. Flynn also loves the water and was an avid swimmer. When he was young, he worked in restaurants and as a lifeguard.

5) His Brother is also in the Military

Flynn’s father was a veteran of World War II and the Korean War. He had wanted to join the army since he was young, and registered in his University’s ROTC program. He was commissioned as second lieutenant on the day of his graduation.

Michael Flynn wasn’t the only one in his family to follow his father’s footsteps. His brother, Charles Flynn also joined the army. Like his brother, Charles Flynn also joined Rhode Island University’s ROTC program, and was commissioned as second lieutenant. He has spent over a year in Iraq before being appointed as senior executive assistant to the Director of the Joint Staff in Pentagon.