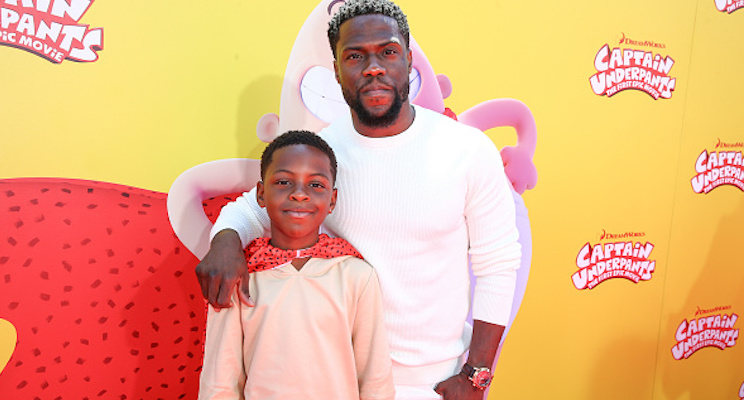 Everyone knows and loves comedian, actor, producer, and author, Kevin Hart. But, did you know that the 37-year-old Jumanji: Welcome to the Jungle (2017) star also has an adorable 9-year-old son, who’s practically the mini version of his father? A quick Google search will reveal that there really isn’t much information available about little Hendrix Hart. The few tidbits of documented father-son moments the Internet has to offer between Hendrix Hart and Kevin Hart, though are absolutely precious! Including this cute and funny Footlocker ad that proves the apple doesn’t fall far from the tree! That’s right! Kevin Hart’s son didn’t just inherit his father’s good looks, but it seems he’s also been bitten by the acting bug, as well!

Right now, it’s unclear whether the brief TV spot will lead to any serious future acting roles or major Hollywood projects, given Hendrix Hart’s young age. It’s safe to assume, though, that if he does decide to follow in his father’s lucrative footsteps, he has ample talent and opportunities to do so! Unfortunately, Hendrix Hart is still too young to have an Instagram account of his own, but don’t worry Kevin constantly posts pictures of the dynamic duo hanging out in various locations and doing activities they both enjoy!

Me & My Mini Me at the "Captain Underpants" premiere today. My little girl couldn't make it because she was destroying her opposing soccer team this morning but she was there in spirit. Make sure y'all go check "Captain Underpants" out on June 2nd in theaters everywhere!!!! #CaptainUnderpants

The Cutest Best Man Ever

Judging from his social media posts, it’s obvious that Kevin Hart is close with both of his kids from his previous marriage to actress Torrei Hart (they also have an 11-year-old daughter together, named Heaven Hart who was part of his wedding party). However, there’s no bond quite like the one that exists between father and son. That explains why when it came time to choose a best man for his August 13, 2016 wedding to Eniko Parrish, Hendrix—who was only 8 years old at the time—was the obvious choice! Out of all of the famous people Hart could’ve cast in the important role of supporting and standing next to him on his wedding day, no one could’ve played the part better than his own son. And they took the pictures to prove it!

When those Hendrix Hart images were released as he stood beaming with pride next to his dad, his equally beautiful sister, and the stunning 31-year-old bride, the Internet nearly broke all over again. Both the older and younger Harts looked absolutely dashing in their matching tuxedos! Understandably, most wedding the details were kept hush-hush for the most part, for privacy reasons. Except for a few breathtaking family photos that everyone is enamored with now.

If Kevin Hart’s Instagram posts are any indication, he’s a devoted family man who adores his kids and loves spending time with them. It’s easy to tell that Hendrix and his sister, Heaven, are very lucky celebrity kids and time will tell whether they’ll make their own marks in the entertainment industry. We’re excited to see what’s in store for both of them!