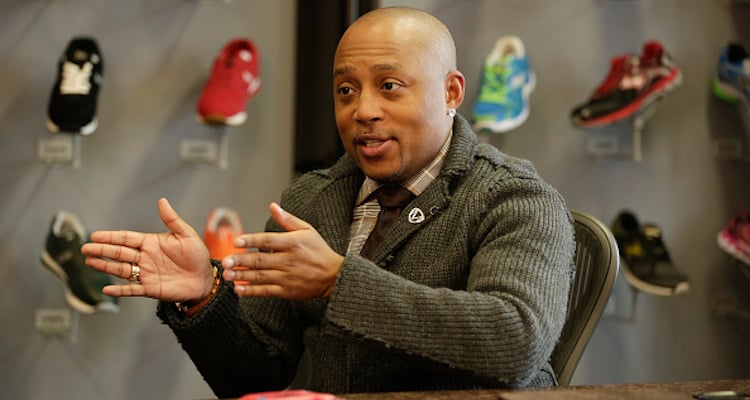 If you want to learn how to start a successful business, then you’re better off asking Shark Tank investor and FUBU CEO, Daymond John. Since the fashion tycoon was recently interviewed alongside other moguls, everyone is not only asking about him but also the personal lives of Daymond John and Heather Taras. If you want more information on the soon-to-be Daymond John’s wife, we have what you need.

Daymond John’s family got an extension when he and Taras welcomed their first child together, Minka Jagger John, on March 2, 2016. Daymond has two daughters from a previous relationship named Yasmeen and Destiny.

It looks like Daymond John’s children better put on their Sunday best, because the billionaire entrepreneur is getting married. Heather Taras’ age is unknown, since she stays out of the spotlight, but we do know what her answer was. John, 48, made an investment of his own when he proposed to his longtime girlfriend on the set of Shark Tank in September 2016.

“I was a little nervous,” John, said exclusively to Us Weekly. “I had to create a speech. I knew a lot of people were looking at me. You know, you never know how someone is going to react, of course. She could always say no, and that’s the first time that I’ve been on the carpet pitching somebody! So, a little nerve-racking, of course.”

Spoiler alert: Taras was choked up but gave him the answer he wanted, very quickly. Minka was also there to see her father make one of the biggest decisions of his life.

“My daughter was sitting in her lap, so I was looking at my beautiful daughter at the same time,” he adds of the big moment, which was caught on tape for them to revisit. He also told Us Weekly that he expressed to Taras in his speech that God had given him everything he needs and that he is “rich with love.”

He proposed with a 9.5 carat emerald-cut diamond ring and now we can’t wait to see Heather Taras’ pics on the big day!

In May, John went public with the news of his thyroid cancer diagnosis and described it as an easy decision to make.

“I wanted to talk about it because we often see people in the news, like my dear friend Big Ang, after it was too late,” John said to Us Weekly about the deceased reality star.

He added: “I had surgery. I was in the bed for a day and now I’m out here hanging and partying and being with my kids and I’m healthy only because I took the opportunity to check into something. That’s why I wanted to do it. I wanted people to understand that you actually don’t have to bury your head in the sand and just hope that the truck doesn’t hit you.”

Her Fiancé Gave Some Great Advice

In an interview video with Business and Burgers, John explained that you don’t need to start from the top to make a successful business.

“I want people to understand that they have the power to do what they want to do,” John said. “Nobody is going to come to your house … and say I’m going to make you rich.”