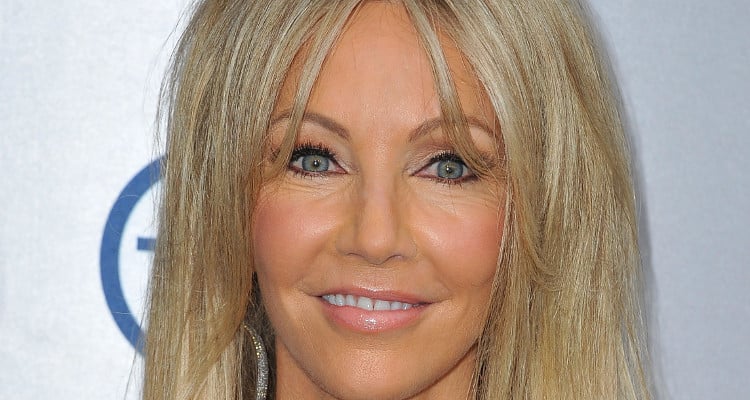 Heather Locklear made her first public appearance in over a year, after checking into rehab this past January. The 55-year-old has always been on the receiving end of plastic surgery rumors, and it doesn’t look like that has changed. Regardless, the blonde bombshell has come out from the shadows and fans are happy to see her again! Read on to know everything about Heather Locklear now, and to see some of her younger pictures!

The Melrose Place actress was seen for the first time in over a year at the Farrah Fawcett Foundation’s Tex-Mex Fiesta. She wore a floral romper with a plunging neckline that showed off her amazing body. She looked a lot happier and healthier than when we saw her last, and we could not be more thrilled! Find out more about Heather Locklear in 2017, and take a look at Heather Locklear’s young pictures (some of which undoubtedly sparked a few plastic surgery rumors!)

Heather Locklear was a femme fetal since the start of her career, and her piercing blue eyes were second to none. She started modeling while in college and started acting shortly after with small roles in the early ’80s.

Catching the eye of producer Aaron Spelling, Locklear landed bigger roles in shows like Dynasty. It was a time when TV shows were exploring new heights, and opportunity knocked when Locklear was cast along with William Shatner in T.J. Hooker. The cop show was a major success catapulting the actress to stardom.

In 1993, a series of roles led her straight to one of her most memorable shows, Melrose Place. It was a spin-off of Beverly Hills, 90210, and its success earned her many accolades and Golden Globe nominations.

Heather Locklear married Tommy Lee, the drummer for Mötley Crüe, in 1986, but the two parted ways in 1993. It was rumored that his infidelity was the reason behind their split. A year later, she married Richie Sambora, the guitarist for Bon Jovi, in Paris.

The couple welcomed their daughter Ava in 1997. But things did not go too well for the couple, who divorced in 2006. They filed for joint custody of Ava and were co-parents to their now 20-year-old daughter, who is an aspiring model and actress.

Heather Locklear has had a pretty eventful personal life. In 2008, she was arrested for driving under the influence after a reporter notified police, and took pictures of the incident, which were reportedly sold to TMZ for $27,000. The reporter maintained that it was a chance occurrence, and not something she staged for financial gain.

Though tests revealed that Locklear was not intoxicated, it was suggested that the prescription drugs that she was prescribed could have been the cause of her erratic driving.

The actress was taking medication for depression and anxiety. Earlier that year, it was reported that a 911 call was made by someone who claimed to be Locklear’s doctor, saying that she was suicidal. But when officials got to the scene, she was fine, and her publicist explained that Locklear never requested medical help. She was taken to a medical facility in Arizona for her depression and anxiety. It was reported in January 2017 that she checked into rehab for the fifth time in nine years saying, “I am working on tying up some loose ends regarding certain issues so I can hit 2017 full steam ahead.”

The gorgeous actress is all about her daughter now, and if you head over to Heather Locklear’s Instagram account, you will see that it is riddled with Ava’s pictures! We are happy to see the 55-year-old looking healthy, and hope to see her on our screens soon!