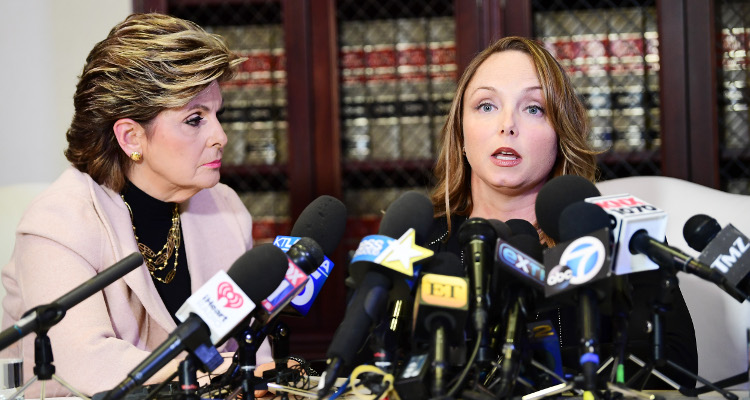 Decorated movie producer, Harvey Weinstein is alleged to have sexually harassed several women, including actresses and employees of the Weinstein Company for decades. Louisette Geiss joins the growing list of Weinstein’s accusers who have detailed Harvey Weinstein’s harassment.

Who is Louisette Geiss?

Born in Miami, Florida, Louisette Geiss started her Hollywood career as an actress appearing in small roles. She has few well-known credits to her name, including Wishmaster 3: Beyond the Gates of Hell, Dave’s Blind Date, and Novel Romance. She has had minor roles in several movies and TV shows including The Drew Carey Show, Two and a Half Men, The King of Queens, All That, and The Bold and the Beautiful.

She acted in and produced an episode of the short comedy series, Livin’ the Dream LA. Geiss also collaborated with Ashton Kutcher in Punk’d to prank Ashley Tisdale. Her last acting credit was in 2014’s TV movie, The Flip Side. She has turned to screenwriting but there is no known work by Geiss at the moment.

She Met Weinstein at Sundance

The former actress held a press conference where she detailed Harvey Weinstein’s harassment against her. By Geiss’ account, she met the embattled producer at the famed Sundance Film Festival in 2008.

“We went to his office and had a great conversation about his current film and about the film I was pitching,” said Geiss in her statement, adding that he looked interested in the script she had co-written. They initially met at a restaurant but it was about to close. So, he offered to move the meeting to his office, which was adjacent to his hotel room.

Geiss agreed but under the condition that he’d not touch her beyond shaking her hand because she’d heard those whispers of him propositioning women. Weinstein agreed, but laughed it off. Their meeting proceeded like any other meeting for the first 30 minutes until Harvey excused himself to go to the bathroom. What happened afterward shocked Geiss.

Geiss alleged that Weinstein said he’d green-light her script if she stayed and watched. But she “pulled it together and quickly exited.” Her account is something similar to what journalist, Lauren Sivan went through with Harvey Weinstein.

Geiss has hired high profile attorney, Gloria Allred to represent her case. Until Saturday, Allred’s daughter, Lisa Bloom was on Harvey Weinstein’s legal team. Allred had slammed Bloom for taking his side and had declared she will represent Weinstein’s accusers in court even if her opponent is her daughter, which is not the case anymore.

Several women approached Allred but the statute of limitations on their potential legal claims has passed. But Allred is hoping Geiss and her damning account of Weinstein’s sexual misconduct will help the victims get justice against the producer.

Allred is calling on Weinstein to enter into confidential arbitration. If he does, his accusers would get justice and he might be able to salvage what’s left of his career. “Why would he do it? Because I think he wants to work in this town again.”