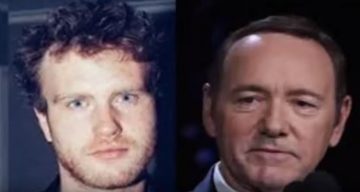 The string of accusations against actor Kevin Spacey seems to be never-ending. Now Harry Dreyfuss, the son of actor Richard Dreyfuss, has made an allegation that Spacey groped him when Dreyfuss was with him and his father in London in 2008. Dreyfuss says he is speaking up now because he is inspired by the fact that Anthony Rapp and several others have made similar allegations against Spacey. Know more about what happened in Harry Dreyfuss’ wiki.

There seems to be no end to the troubles actor Kevin Spacey is facing as more people are hurling allegations of sexual harassment against him. After actor Anthony Rapp accused Spacey of sexually harassing him when he was just 14 years old, Harry Dreyfuss, Richard Dreyfuss’ son, has accused Spacey of doing the same when he was 18.

Richard Dreyfuss is an American actor who became famous in the 1970s and throughout 1990s by acting in popular films such as American Graffiti, Jaws, Close Encounters of the Third Kind, Stand by Me, Stakeout, The Goodbye Girl, and Mr. Holland’s Opus.

He's praying Richard: "lord, in the future, because I know in gonna do it, please forgive me for abandoning my children." God: "oh yeah no that's easy BING you're done you're forgiven here's an Oscar."

Born in 1990 to his parents Jeramie Rain and Richard Dreyfuss, Harry Dreyfuss’ age is 27 years. He has two older siblings—a sister named Emily and his brother, Benjamin. However, his parents divorced in 1995.

Credit to @selashiloniphoto who presumably is the person the balloon is talking to, which isn't very nice.

Harry Dreyfuss is an actor and is known for his movie, The Incomplete Love Triangle, released in 2015. Dreyfuss is in the news after he made startling revelations about actor Kevin Spacey in a self-written account published on Saturday, November 4, 2017, on Buzzfeed.com.

Dreyfuss claims that Spacey groped him at the age 18 when he was with his father and Spacey in 2008. At that time, Spacey was directing Richard Dreyfuss in a play at the Old Vic in London, England.

In the Presence of the Father

Dreyfuss wrote, “It happened one night when the three of us were alone in Kevin’s apartment rehearsing my father’s lines. My father didn’t see, and I didn’t tell him about the incident for many years. Instead, I spent the next nine years telling people the story at parties for laughs.”

If Wes Anderson movies had people with bad haircuts…

Now that he has realized the enormity of this alleged incident, Dreyfuss wrote, “Kevin Spacey is a sexual predator. But I still never thought talking about it seriously was ever an option.”

Remembering the incident, Dreyfuss wrote that Spacey repeatedly placed his hand on his thigh while his father Richard was busy reading the script. However, worse was to come.

Dreyfuss wrote, “Over the course of about 20 seconds, centimeter by centimeter, Kevin crawled his hand from my thigh over toward my crotch. My mind went blank. Suddenly, he had completed his journey, and now he had all of me in his hand. I stopped reading the script, and my eyes went wide.”

This is @emdreyfuss's baby and I will murder whoever looks at him wrong.

Speaking up Was a Struggle

Dreyfuss described his ordeal and said, “I don’t know how long we sat there like that. It could have been as little as 20 seconds, or it could have been five minutes. It’s the hardest part of the story for me to recall. What I do remember is that, other than being a shy kid who obviously admired Kevin Spacey a lot, I never once gave him a signal that I would want to be with him in that way.”

The young actor ended the write-up saying, “I hope my story can serve as inspiration to others who may have felt that they couldn’t or shouldn’t speak up until now.”

Dreyfuss says that he was inspired to come out after Rapp and several others made allegations of sexual harassment against the beleaguered actor.

A Father Stands by His Son

Spacey has denied these allegations through his lawyer Bryan Freedman, who made a statement saying, “Let me be clear, Mr. Spacey absolutely denies the allegations.”

The good news for Dreyfuss is that his father stands strongly behind him and has told Buzzfeed that he was present that night this alleged sexual harassment happened.

Richard Dreyfuss tweeted on Saturday, November 4, “I love my son @harrydreyfuss more than I could explain with all the words in the world. And I am so incredibly proud of him right now.”

I love my son @harrydreyfuss more than I could explain with all the words in the world. And I am so incredibly proud of him right now. https://t.co/iLOxTxPe4n

Too Toxic to Touch

This latest allegation has put Spacey in even more trouble as his career spirals out of control with Netflix canceling his role in their hit web series, House of Cards, and dumping the movie, Gore.

If Harry Dreyfuss’ allegations are true, then Kevin Spacey is guilty of robbing another young boy of his most precious gift—innocence.

A feeling too complex for a caption.