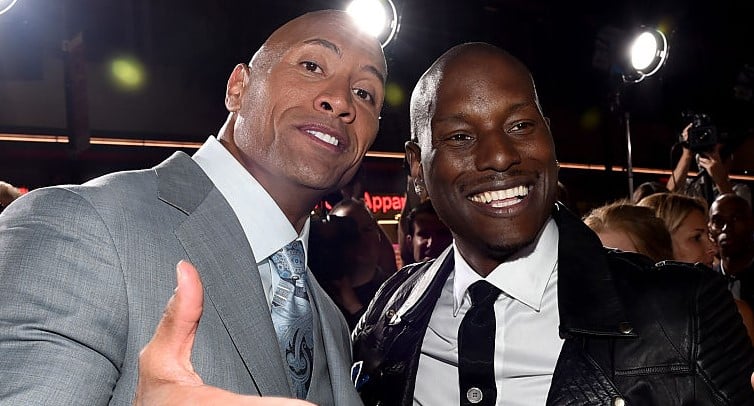 Why are Tyrese and The Rock fighting? In simple terms: It’s about the next Fast & Furious movie being pushed and the possibility of The Rock’s character getting a spinoff movie. The feud publicly started last August, when The Rock decided to get something off his chest about his co-workers, specifically the men.

“There’s no other franchise that gets my blood boiling more than this one,” he began. “My female co-stars are always amazing and I love ‘em. My male co-workers however are a different story. Some conduct themselves as stand up men and true professionals, while others don’t. The ones that don’t are too chicken s–t to do anything about it anyway. Candy asses.”

The comment has been debated to be about either Vin Diesel or Tyrese.

After The Rock’s comments, Tyrese posted a reply of his own but after that, fans started to realize that things were getting worse between the so-called “Fast Family.” Tyrese continued the feud with an Instagram post that has since been deleted.

“If you move forward with that #Hobbs Movie you will have purposely ignored the heart to heart moment we had in my sprinter,” he wrote in a now-deleted comment. “I don’t wanna hear from you until you remember what we talked about. I’m on your timeline cause you’re not responding to my text messages – #FastFamily is just that a family…….. We don’t fly solo.”

Tyrese continued, “I have never and will never have a problem with this major movie star he’s my brother. I’m simply trying to reach him cause he won’t call me back about this solo #HobbsMovie  I want you to shoot it just not right now cause the #Fast9 release date has already been announced and we can’t let our loyal fans #FastFamily or our loyal fast and furious FANS down on any level from pushing the date…….. Didn’t you see how HUGE #Fast8 was? It’s because we announced and KEPT our release date bro.”

Many have criticized Tyrese for his continued remarks and have joked that he’s desperate for another payday. Either way, The Rock (whose real name is Dwyane Johnson) has yet to respond further on Tyrese’s public statements.

Count on Roman to save the day and look good while doing it. The #F8 Extended Director’s Cut is NOW on Digital. Link in bio.

In an Instagram post, Vin Diesel seemingly supported The Rock by writing that it isn’t the fault of one person for the movie being pushed back and described his co-stars as “brothers.”

“However, like any vehicle that has run around the globe 8 times, the franchise is in need of maintenance. My good friend and the godfather of Universal, Ron Meyer has granted me the time to do just that. We have some very exciting news to share soon… stay tuned. Yours truly, Dom #FamilyAlways “ he added, referencing the important theme of family, much like in the series.

Own #F8 Extended Director's Cut TODAY on Blu-ray, DVD, Digital & 4K [Link in Bio] Watch it tonight with your #FastFamily

Tyrese reportedly threatened not to be apart of the franchise any further if The Rock is going to be involved.

“I’m sorry to announce that if Dewayne [sic] is in Fast9 there will no more Roman Peirce [sic],” Tyrese wrote. “You mess with family and my daughters survival I mess with yours……… close your eyes dude you’re a ‘Clown.'”

That threat may not mean anything to the higher-ups, since the franchise continued without the late Paul Walker, with the help of CGI and his real-life brother. The latest film didn’t involve Walker’s character at all and still did well at the box office.

Recently, Tyrese released an emotional Instagram video about his custody battle over his daughter Shayla, 10, and was reduced to tears. He has since claimed that the feud with The Rock is over and was actually mad at the idea of a private deal and his family’s future.

“Never mad at The Rock I was just mad that he was ‘pitched’ an idea privately and said yes to it without thinking of what I’m dealing with personally.”

“I’m almost broke paying legal fees and is doing what we committed to doing for the #FastFans and #FastFamily cause the fast is tradition it’s not just another movie,” Gibson wrote. “Fast was created to COUNTER images of racism to counter that WE ARE NOT ONE RACE.”

Want you guys to know I️ had a real Heart to Heart with one of Dewayne’s associates and this will be my last post about him…….. I️ repeat my last…. I️ respect the associate who called.. My story will never change I️ was never DJ’s Co-Star… I’m Shayla’s Father first…. Justin Lin is back in the driver seat that’s exciting cause it going to feel like the true #FastFamily all over again….. When we see Justin we see Paul…..