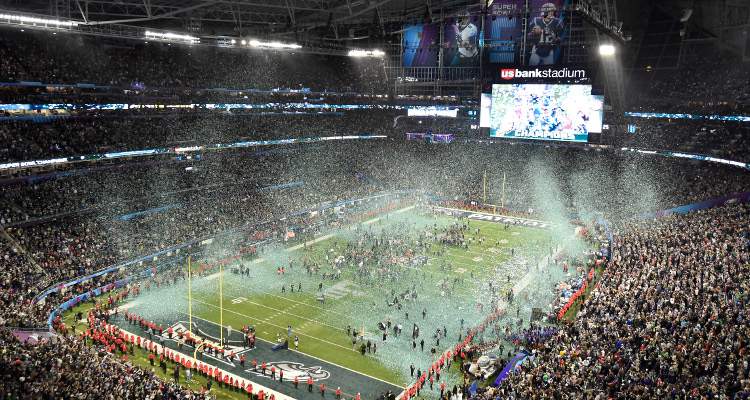 Did something go wrong with your TV? The Internet connection? Nope! That was NBC’s Super Bowl broadcast. The screens went dark for a good few seconds during the all-important commercials. Many have been left wondering what happened to the Super Bowl commercials. And, we’ve got the scoop!

Here’s what you need to know!

Over 100 million eyeballs watching the Super Bowl were left confused during the commercials. The screen went dark for a total of 26 seconds when the Patriots vs. Eagles game cut to commercials.

The commercial pause began after the Patriots kicked the second quarter field goal. However, the commercials didn’t start until half a minute later.

NBC responded to the blackout in a statement saying, “We had a brief equipment failure that we quickly resolved. No game action or commercial time were missed.”

However, the network didn’t elaborate on the “equipment failure.”

A 30-second spot during Super Bowl commercials is said to cost around $5.0 million. A glitch in the commercials could result in the loss of millions in ad dollars for the network. So, if no commercial time was lost as per the NBC statement, the dark screen could have been at the expense of an NBC promo.

Eventually, the broadcast resumed, and the ads played without any issue. Eli Manning and Odell Beckham Jr.’s Dirty Dancing parody in a commercial also won over Twitter.

After the commercial pause, the telecast cut to the announcers’ booth in the Minneapolis, Minnesota stadium. The announcers filled time until the game resumed and everyone exhaled in relief when the game continued.

The Philadelphia Eagles won the game over the New England Patriots, 41-33.

Except for the little glitch during commercials, the Super Bowl LII broadcast went without a hitch. Even Justin Timberlake’s Half Time Show was flawless and uneventful. Of course, that didn’t stop Twitterverse from suggesting Janet Jackson had something to do with the blackout!

The Internet denizens did what they do best and put forth their own theories for the blackout, from Janet Jackson’s sinister plots to a Sopranos reboot. Even Tide and Deadpool made the most out of this blackout!

After getting over the initial panic, football fans left Twitter in stitches with their hilarious theories.

Clean clothes are still clean in the dark. If it's clean, it's a #TideAd #SB52 #SBLII #blackout

Did anyone else's TV's black out? For a second I thought the #SuperBowl ended like The Sopranos

Best commercial of the game ? a tribute to the @Ravens & @49ers #SuperBowl blackout ? pic.twitter.com/UCM5QUtDKC

Ya'll know who was behind that blackout…. #SuperBowl pic.twitter.com/lLmx0VARH4

Raise your hand if you thought "Damnit did I pay my bill?" ??‍♂️? #SuperBowlLI #Blackout

That was an ad for the new Sopranos movie.

Black out #SuperBowl commercial kept me on the edge of my seat. Not sure what brand it was for but had me captivated.