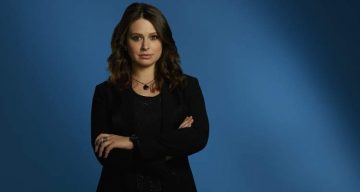 Scandal returned from its hiatus on Thursday, January 18 and the suspense about Quinn (Katie Lowes) is finally out! What happened to Quinn on Scandal? If you did not get the chance to catch up, but still want to know if Quinn is dead, then keep reading!

Scandal is currently in season 7 and fans could not wait for it to come back after its winter hiatus.

However, their excitement soon turned into sorrow when they found out the truth about what happened to Quinn on Scandal. If you still have questions about whether Katie Lowes is leaving Scandal, we have all the info you need right here.

Quinn Perkins, who was once Lindsay Dwyer, works at Olivia Pope & Associates. In the show, gets involved with Charlie (George Newbern), who gets her a spot on the government agency, B613, which she left to rejoin Olivia.

Scandal returned to TV after two long months following its fall finale. Fans were hoping that Quinn would still be alive, but, as they say, we can’t always get what we want.

What Happened to Quinn on Scandal?

‘Scandal’ Star @ktqlowes has been struggling with psoriasis since she was around 28. She told us “I felt embarrassment and shame, and I wanted to hide. I spent six months living in denial. I self-medicated, even as my psoriasis grew and changed.” Now she’s sharing her experience and helping others as the spokeswoman for Psoriasis: The Inside Story – a campaign to inspire others with psoriasis and shine a light on the profound impact that psoriasis has on the lives of more than 8 million Americans. Visit our blog (link in bio) to learn more about Katie’s psoriasis journey and the campaign. #thursdaythoughts #inspiration #scandal #quinnperkins #motivation #bestrong #psoriasis #love #strengths

A post shared by National Psoriasis Foundation (@national.psoriasis.foundation) on Jan 4, 2018 at 12:56pm PST

Before the break, we saw Rowan (Joe Morton) and Olivia (Kerry Washington) face off, with Olivia calling her father’s bluff by calling B613 to kill him. Off-camera, we hear him shoot once, followed by Quinn’s screams, and a second shot followed.

Thursday’s episode started with Rowan getting rid of a car that might have had Quinn’s body inside. Authorities find partial blood, dental, and hair samples that match Quinn, meaning she might have died.

Although a body is visible, we never actually see a face! So, there is still a glimmer of hope that Quinn may be alive and possibly working with Rowan.

Charlie goes to Rowan’s house to rejoin B613, and hears the cries of a baby. Was it Quinn’s baby? When was it born? Is she still alive? So many questions!

Is Quinn Dead on Scandal?

Katie Lowes was recently seen on set of Scandal, but did not reveal anything about her character’s fate: “I can’t say anything much about why I’m here, but you know that the show deals a lot with flashbacks and time not necessarily moving in chronological order.”

She added, “You will find out very early on as soon as we come back what Quinn’s fate is. All I can say is some of the stuff you’re going to see is definitely the hardest stuff I’ve ever done for sure.”

But we still do not know if those flashbacks mean that Quinn is dead!

At this time, whether Quinn is alive or dead on Scandal is still not entirely confirmed, but hopefully we will find out sooner rather than later! We’re dying to know!