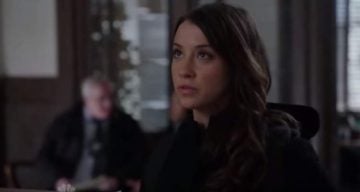 What happened to Nadia on Chicago P.D.? With a Chicago P.D. and Chicago Fire crossover in the works, many fans remember another character who died in the crossover between the hit cop drama and Law & Order: Special Victims Unit. How did Nadia die on Chicago P.D.? If you need a refresher and want to know about the future crossover, then you came to the right place.

Who Played Nadia on Chicago P.D.?

For those who don’t remember, Nadia was a former prostitute-turned-informant, played by Stella Maeve. Nadia was 18 years old when she turned her life around, thanks to Erin Lindsay (Sophia Bush). It was in the show’s second season when Erin invited Nadia to live with her and stay sober. Nadia worked at the police station as an assistant and was studying criminology to eventually work in the Intelligence Unit.

Who Killed Nadia on Chicago P.D.?

During the crossover episode (which was primarily focused on SVU), Nadia was killed and raped by Dr. Greg Yates (Dallas Roberts), who had been getting away with murdering several women for years. He was being hunted by the SVU and P.D. teams but it was too late —Nadia was already found dead after she had been missing for days. Dr. Yates was found guilty on all counts for his crimes but it wasn’t enough to help ease Erin’s guilt.

“Voight tries to keep her from losing it, and that leads toward our cliff-hanger in P.D., which is Lindsay looking at her badge,” said showrunner, Matt Olmstead in an interview with The Hollywood Reporter. “Is she going to fling it and just go back to the party life where she came from and drink her sorrows away? Or is she going to stick it out and be a cop? That’s the decision she has to make.”

“It was never the plan,” added Olmstead. “All along, we wanted Lindsay to find a character and be to that character like what Voight was to her. To reclaim somebody and give them an opportunity and try and help that person get back on their feet and that was what happened. … Everything we had planned was paying off.”

Erin soon fell into old habits by drinking, missing work, pushing people away, and letting her mother, an addict, back into her life. Erin eventually lost her job but then got her life together by the next season after helping rescue her boyfriend on a mission. Later on, Nadia was honored by the Chicago Police for her bravery, despite not being a cop yet.

While Chicago Justice was cancelled after its first season, Chicago P.D. is getting ready for its 100th episode! The NBC drama will crossover with Chicago Fire, while also including Chicago Med in between for the two-part episode arc.

There’s no date or story for the crossover yet, but the Chicago P.D. milestone episode will air sometime early next year. While Bush’s character isn’t set to make an appearance, fans are still hopeful.

Three of our faves, out for a casual stroll. #ChicagoPD