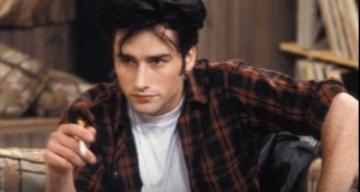 Roseanne is back! The ‘90s TV show made its comeback on Tuesday night, and fans are super excited to see their favorites back on screen. While most of the original cast members have made an appearance in the reboot, the character of Mark Healy was visibly missing! So, what happened to Mark on Roseanne? We have all the details for you, right here.

It has been over 20 years since Roseanne last aired on TV. So for Roseanne fans, the reboot is a long-awaited homecoming!

The new season has most of our favorite characters reprising their roles, but Mark Healy doesn’t make an appearance. If you remember Mark, he went from being a tough guy to a considerate husband and brother. And the Conner family took every opportunity to exploit his dim-wittedness!

So, why isn’t Mark on the Roseanne reboot? How did Mark die on Roseanne?

Who Played Mark on Roseanne?

Mark first met the Conner family when he was dating Becky Conner, played by Lecy Goranson (who was replaced by Sarah Chalke for a few seasons). He became known as Becky’s dim-witted, leather jacket wearing boyfriend.

Also Read: What Happened to the First Becky on “Roseanne?” Why Did Becky Leave “Roseanne?”

As Becky’s biker boyfriend, Mark had a bad boy image and the family did not like him at first.

Mark and Becky eloped and moved to Minneapolis but then moved back to live with the Conners. They then moved to a trailer, and eventually, Mark worked for his father-in-law, Dan Conner.

Mark had a younger brother named David, who later married Darlene, Dan and Roseanne’s other daughter. He also had two younger sisters, Lisa and Nikki.

In the season nine finale, Mark and Becky were expecting a child! However, Becky did not want to mention it to her family.

Mark was also dubbed the family “dummy.” And the Conner family did not waste any opportunity to insult or trick him any chance they got. It certainly made for some great laughs!

This scrabble game scene will show you exactly what we’re talking about:

What Happened to Mark?

Mark Healy did not make an appearance in the Roseanne reboot because of Glenn Quinn’s untimely death.

In December 2002, Quinn passed away from an accidental drug overdose. His body was found at a friend’s home in North Hollywood, California. He was 32 years old.

Quinn had been struggling with homelessness and drug addiction in the months leading up to his tragic death, according to reports.

Also Read: Why Did Dan Leave “Roseanne” in 1995? Does He Die in the Last Episode of “Roseanne?”

Born and raised in Dublin, Ireland, Glenn Quinn moved to Los Angeles with his family when he was a teenager.

Quinn may have gained fame with Roseanne, but he also had a starring role in the popular TV show, Angel, a spin-off of Buffy the Vampire Slayer.

The actor’s portrayal of Doyle won him a huge fanbase. He also made a few big screen appearances. His last film was R.S.V.P. in 2002.

Mark Healy will definitely not be forgotten in the Roseanne reboot. So fans will hear more about him in the next few episodes.

“We all missed Glenn so much, because he was just a great part of the show, and it’s not something we wanted to just gloss over,” Roseanne Barr added.

So, did Mark die on Roseanne?

For now, we only know that Becky is single in the new Roseanne, and she doesn’t have any children.

Fans will have to watch the new season to know exactly what happened to Mark on Roseanne. But, we can be sure that the producers will give the beloved character a fitting farewell.

The new season of Roseanne airs at 8:00 p.m. EST every Tuesday on ABC.