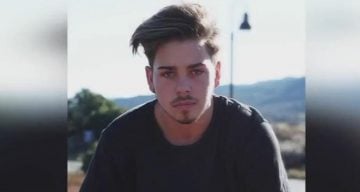 In a shocking incident in Temecula, California, some people witnessed a stabbing at the Walmart parking lot, where a 19-year-old Instagram star named Kevin Rodriguez was stabbed to death. Rodriguez’s death has come as a shock to his family, especially his girlfriend, whose arms he reportedly died in. Read on for more information on this heart-wrenching story.

For those who don’t know who Kevin Rodriguez was, you need to know that he was just an innocent teenager, with aspirations of making it big in his life. And he was certainly on his way there with over 40k followers on his Instagram account! He was a budding social media sensation taken too soon by a senseless act of rage. Rodriguez was killed on Wednesday, November 29, 2017, in the Walmart parking lot, when he was out with his girlfriend to buy groceries for his father’s belated birthday. Here’s what happened to Kevin Rodriguez.

How Did Kevin Rodriguez Die?

Kevin Rodriguez was a freelance videographer, on his way to becoming a social media sensation. He already had 41k followers on Instagram, where he would regularly post photos/videos of his adventures and his creative ideas. Rodriguez and his girlfriend of three years, Jensen Elizabeth (as seen on Instagram) made little snippets of their travels and holidays together, and some stunts that came with the fun. She began posting them on Instagram, thus starting the massive following of fans.

Their creativity attracted fans and their popularity picked up the pace. He was a sporty person and loved the outdoors enough to make a living out of his hobby. The Temecula police officials are not releasing many details just yet, but the cause of Kevin Rodriguez’s death was reportedly a stabbing in his heart.

What Happened on the Afternoon of November 29?

Rodriguez and his girlfriend were on the road in their car, and according to sources, the traffic was bad. A man who was perhaps anxious and agitated was honking at a lady near the crosswalk, and he reportedly almost hit Rodriguez’s car.

“They saw the guy first honking at a lady going through the crosswalk. She said there was a lot of traffic and this guy looked like he was getting really bad anxiety,” said Atticus Rodriguez, father of Kevin Rodriguez.

There was probably a reaction from Rodriguez about the rash driving, and after that, the couple approached the Walmart store. The attacker had followed them there, and in a fit of rage, held Kevin Rodriguez’s throat.

The attacker allegedly made a video of the crime, too. While he choked Rodriguez with one hand, he held his camera in the other.

“He got his phone like this, he started recording it. And with the other hand, first, he choked him. Kevin was trying to get away and that’s when he got stabbed,” said Atticus.

He then allegedly pulled out a weapon on Rodriguez and stabbed him to death. Rodriguez’s girlfriend witnessed the whole thing, and she panicked when she saw that her boyfriend was stabbed.

She ran to the driver seat of the car, calling out to Kevin, but when he collapsed near the vehicle, she came running out to help him. But it was already too late, and Kevin Rodriguez was bleeding profusely.

Devastated at what had just occurred, she held him in her arms, where he took his last breath.

chillin next to a window ?

Who is Kevin Rodriguez’s Suspected Killer?

According to ABC News, the police have said, a man named James Fortney is suspected of the death of Kevin Rodriguez. Elizabeth reportedly saw Fortney driving erratically while they were still in the car, and now he is arrested.

After the act of stabbing, according to Rodriguez’s parents, the suspect tried helping Rodriguez, after he realized he had done something wrong.

“When he realized what he did, he started helping him. Trying to bring him back to life. That was really weird. How do you do that to somebody, then realize what you did and try to help him? It makes no sense to me at all.” Atticus said.

His mother Traci Rodriguez was overwhelmed with emotion when she spoke out about her son, and was deeply saddened to see Jensen Elizabeth in that state of shock.

“He really loved his girlfriend, and I’m sorry, I’m really sorry for her to have to go through that—holding him, the way she did. And I’m going to be there for her.” Traci Rodriguez said in the interview.

Our love is true ?

Kevin Rodriguez was loved by all his family and friends, and he was described as a very loving soul.

The deputies at the Riverside County Sheriff’s Department said that the assault happened around 12:15 p.m. and Rodriguez was found with multiple stab wounds in the 32200 block of Temecula Parkway.

He was rushed to the hospital but was pronounced dead.

There has been no statement made by Kevin Rodriguez’s girlfriend to the media, and with her being a prime witness, a lot more information about the case can be revealed if she speaks out.

But apparently, she told Kevin Rodriguez’s parents everything that happened, and now the family is mourning a huge loss.

“I was always afraid and told him you’re gonna get hurt,” his mother said. “But I never thought he’d get hurt this way. This was a senseless act. This really was – over road rage. It took my boy away from me.”

Jensen Elizabeth took to Instagram on the same day, with a heartfelt message about her loss. “You always told me not to worry, that I’d never lose you. I can’t explain how badly I miss you right now. We’ve been inseparable since the very day I met you. I remember every I love you, every kiss, all the laughter.”

She continued, “Holding you till you let out your last breath only left me helplessly trying to give you mine. I know you know how much I love you and that Our love will never die. I can’t wait to see you baby, God’s gonna take great care of you. Loving you was “sooo worth it.”

A fundraiser has been set up on www.gofundme.com for Kevin Rodriguez’s funeral and further expenses. You can also donate to help the grieving family.