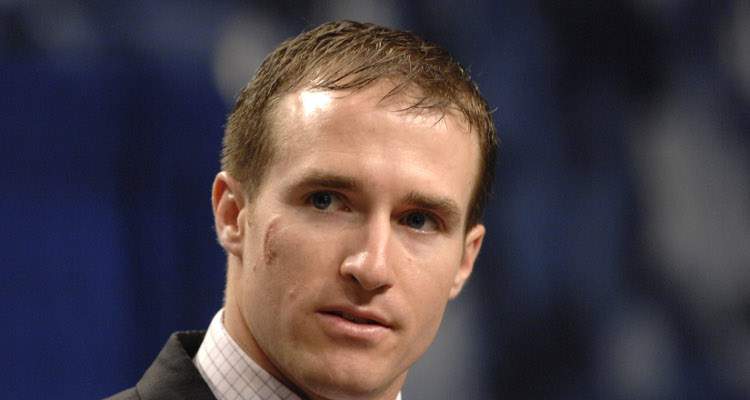 When people meet NFL football player Drew Brees, the first thing they notice is the scar on the right of his face. So, what happened to Drew Brees’ face? How did Drew Brees get his scar? The truth is that it’s a harmless birthmark and so the doctors told his parents that they could let Brees keep it. Fast forward many years and Brees still has it, even though he did undergo surgery on it. Brees is comfortable with his scar and intends to keep it, giving him a trademark look.

Drew Brees is an American football quarterback for the New Orleans Saints in the National Football League (NFL). Before playing for the Saints, Brees used to play for the San Diego Chargers from 2001 to 2005.

Viewers and fans have seen Drew Brees’ scar right from the time he first stepped on a football field. They have wondered about the origin of his scar and speculated on it. We will tell you all we know about the scar on Drew Brees’ face right here.

Drew Brees had a large mole on the right side of his face when he was born. It was diagnosed as harmless, and so his parents did not make him undergo any medical procedure to have it surgically removed.

Brees was just three years old when his parents discussed the option of getting his birthmark removed, but the doctors they consulted told them that there was no harm in keeping it. They even suggested to his parents that an angel had kissed Brees. And although Brees was comfortable keeping and living with his highly noticeable birthmark, other people seemed to have a problem.

When Brees was in college and his team was named as Playboy’s All-American team, the magazine airbrushed the birthmark from the photograph they published.

Also Read: Roger Goodell’s Net Worth 2017: How Much Does the NFL Commissioner Make?

Wherever Brees went, people noticed his birthmark right away and asked him about it. Even talk show diva Oprah Winfrey couldn’t help asking Brees about it. Winfrey played naughty and asked Brees on her show if someone had just kissed him and even tried to remove the supposed “lipstick.”

There are rumors that when Brees went dancing with girls, they mistook it for dirt and even tried to wipe it off.

Just having a dinner date w my daughter tonight! She always wants to eat my food, no matter what it is!

Maybe it got a little too much attention, but recently, Brees underwent surgery and had his birthmark operated on. It did not go away but did reduce in size after the operation. The birthmark now appears as a little red scar and is still noticeable.

What does Drew Brees intend to do about his famous scar? He has said that he has no intentions to remove his scar through plastic surgery and is committed to keeping his birthmark on his face, as long as the doctors tell him that it is harmless.

To my college sweetheart and love of my life…Happy Anniversary!

So, fans and people who love Drew Brees will have to accept that the scar on his face is not going anywhere anytime soon.