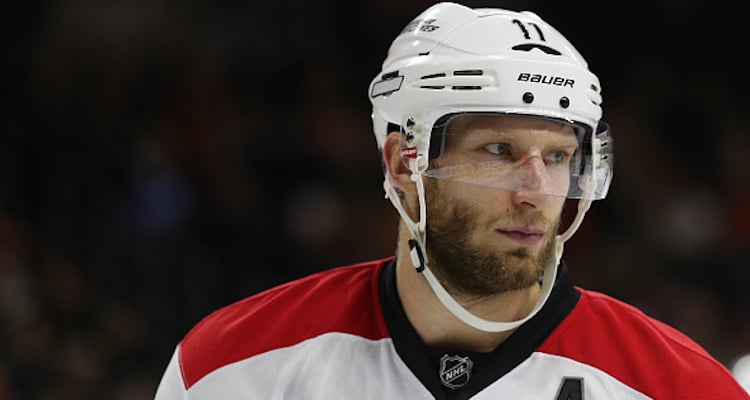 Jordan Staal, 29, is a Canadian NHL player who married his longtime girlfriend, Heather, on June 22, 2012. He has three brothers: Eric, Marc, and Jared. Before Hannah, Jordan and Heather welcomed two daughters: Abigail, on January 2, 2015, and Lilah, on July 5, 2017.

Eric, who is also a hockey player, spoke to Fox Sports about his own three children, when the topic of Jordan possibly missing Abigail’s birth came up.

“I’ve been there for each one. You don’t want to miss the birth of your children, even though in this environment, it can happen,” the older Staal brother said. “It’s a pretty surreal experience.”

Luckily, Jordan made it to the hospital on time and was able to witness the birth of his first child and then went to work shortly after.

“I think we went in there around 9 [Thursday night] and we had the baby around 2:30-ish [Friday morning],” Jordan said. “Until 5:30, yeah, maybe shutting my eyes for a little bit. I got a nice little pregame nap that felt like an eight-hour knockout this afternoon, but it was nice to get that in.”

In the same 2015 interview, Eric also spoke about their kids growing up together and how his younger brother might be tired a lot.

“I’ve got a two-week old, so I was a little step behind because I’m not getting as much sleep as him running on adrenaline. So in two weeks, he’ll be maybe moving a little bit slower like I was,” Eric said, grinning. “It’s a lot of fun. We’re going to have some kids around the same age, so it’s pretty cool for us to experience that.”

Heather’s due date was scheduled to be three weeks later, but Jordan said that the timing worked out either way.

How Did Hannah Staal Die?

According to team spokesman Mike Sundheim, Hannah died on Saturday, but her cause of death wasn’t made public.

“The thoughts and prayers of the entire Hurricanes organization are with Jordan and Heather Staal on the loss of their infant daughter, Hannah,” said a statement on the Hurricane’s Instagram. “We ask that you respect their family’s privacy at this time.”

While many fans gave their condolences to the family, there were also people from rival hockey teams that sent kind words of support.

One person wrote, “I won’t say I’m a fan of the Hurricanes, but things like this transcends hockey. Condolences to Jordan and his family [sic].”

Another wrote, “Condolences from a rangers fan. Some things are much bigger than the sport. I’m sorry, Jordan. My thoughts and prayers are with you. [sic]”