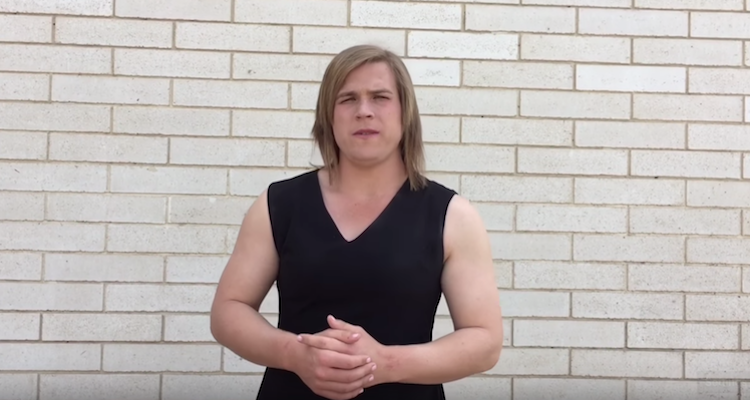 There is a good chance that Hannah Mouncey showed up in your news feed this morning, and you have no idea why. To be fair, unless you follow the Australian Football League, up until today, there’s probably no reason why you would know about her. Hannah Mouncey is a transgender athlete who is making news due to a fight that is also being fought in numerous other sports leagues. In our Hannah Mouncey wiki, we’ll fill you in on all the important details about this story, and why it’s important in today’s society.

Hannah Mouncey is 6’2″ and weighs in at approximately 218 pounds. In any contact sport, she would be a brutal opponent to face! Originally a handball player for the Australian men’s team, Mouncey switched to Australian football following her transition and made a bit of name for herself. In the eight games she played for Ainslie in Canberra’s women’s competition, Mouncey kicked 17 goals, a pretty good start for such a short period of time! Doing so well in the Canberra’s women’s league, she thought she would try out for the major leagues and head to the AFLW. That decision is part of the reason behind the current headlines.

Not Eligible for the Draft

Hannah Mouncey is transgender who began her transition in 2015. She has always been athletic and played handball at a competitive level as part of the Australian men’s handball team. After her transition, Mouncey got into Australian football.

Similar to rugby, Australian football can be very competitive and very brutal. It’s a contact sport with very little in the way of pads or safety equipment. Its ruleset is one of the oldest recognized in professional sports. It’s a sport that holds its traditions very dear.

Mouncey approached the AFL about her eligibility for the upcoming season’s draft. As the league is trying to be more inclusive and progressive, it invited Mouncey to discuss the matter. After lengthy discussions, the AFL announced that Mouncey would not be eligible for the AFLW draft this season. A statement on behalf of the AFLW read:

“We acknowledge Hannah’s openness and co-operation. She has contributed to a process which will substantially inform the development of the AFL’s transgender policy and procedure for future players at the elite level.”

And this is where the controversy really began.

Why Adopt the Policy If You Don’t Use It?

In an effort to be inclusive, the AFL adopted the International Olympic Committee guidelines when it came to transgender athletes. These new AFL guidelines state that an athlete “must demonstrate that her total testosterone level in serum has been below 10 nmol/L for at least 12 months prior to her first competition.” According to reports, Mouncey was well under that limit. So, why wasn’t she eligible for the upcoming draft?

In addition to meeting policy standards, the other controversy that surrounds the issue is timing. Mouncey’s determination of eligibility was left to almost the last minute as she was denied her chance for the draft a day before it was to occur. Having known and worked on the issue for the months, you would think the AFL would have been able to hand down an answer, whether it be yes or no, at a much faster pace.

Where Does Mouncey Go from Here?

To be fair, today’s ruling does not preclude Mouncey from next year’s draft and in their statement, the AFL thanked Mouncey for her participation in the process.

“The AFL has made very strong commitments to equality and inclusion at all levels of the game. We recognize that participating in sport has physical, psychological and social benefits and we are committed to making Australian football on every level welcoming to all in our community.”

Hannah Mouncey’s age is 27 and while another year won’t make her the oldest player in the league, she will be an older player with the least amount of playtime in the AFL. As with any physical or contact sport, the clock is working against you and this year-long setback is a bit of a blow to the possibility of Hannah Mouncey’s AFL career.

It’s worth noting that while Mouncey is disappointed at the news, she is facing it with a certain dignity. Part of the regulations is that the athlete has to be up to playing at the elite standard that is the AFL. It might have been felt by some that Mouncey could use one more year of playing in the minors to get up to speed. And if you want to follow her amazing story further, you can do so through her official Facebook page and Twitter account, but it does not appear that a Hannah Mouncey Instagram exists. Hopefully next year, she will say something different about her AFL draft. In the meantime, Mouncey had this to say via Twitter:

Good luck to all the girls who nominated for the AFLW draft tomorrow, especially my mates from Canberra. I can’t wait to see you all at the highest level and to play with and against you back in Canberra next year!