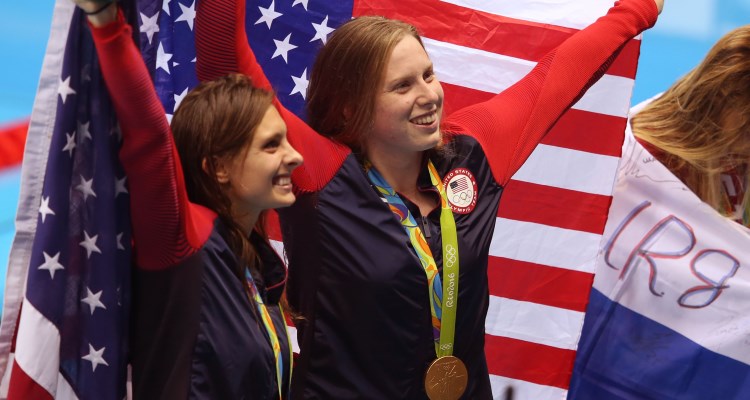 If you just began following Hali Flickinger’s Instagram, it might be because the swimmer only opened her account three weeks ago! Hard to believe someone can go without posting to Instagram in this day in age, right? Especially for a young athlete gunning for gold!

On her account you will find posts with fellow swim mates, delicious food items, loving pictures of her fiancé (Martin Grodzki), and of course, her experience at the 2016 Rio Olympics.

As of now, Hali’s bio on her Instagram account reads, “USA swimming National Teamer, ice cream lover, and Georgia dawg forever.” Who knows, maybe soon she will be able to add “Gold medalist” to that bio, as well!

Her Family is Her Biggest Support System

When it came to the day to qualify for the Olympic team, Hali Flickinger’s parents – Doug and Lea Flickinger – waited patiently to receive the results. When Hali managed to secure a spot, she walked into the room with her parents and other family members as they all cried together and hugged each other in excitement.

Hali Flickinger’s parents supported her dream of swimming, which began at the early age of 7. When Hali wanted to continue to push herself to become the best, her parents were right behind her. They enrolled her in different swim programs and set her up with better coaches to allow her to pursue her dreams. Well, all that hard work and support truly paid off as Hali has landed herself on the American National team and is now living her dream of competing in the 2016 Rio Olympics.

Her Lack of Height Can Be a Challenge

Height is a well known advantage when it comes to swimming; in fact, the average Olympic female swimmer is 5 inches taller than the average American female. When it comes to height, Hali is somewhat at a disadvantage, but she recognizes her challenges and embraces them to push further.

Hali has stated that performing the 400 individual medley is far more challenging than the 200 fly, based on her lack of height. To make up for the lack of leg length, Hali ensures that her other three strokes are on point to make up for her lack of breaststroke.

But although Hali finds the 400 IM more difficult, she finds it helps her perform better for the 200 fly. She uses the 400 IM practices to help her become a better swimmer and those allow her to improve her techniques.

To become an Olympian, sacrifices have to be made and that is exactly what Hali did to get to where she is today. Hali didn’t attend her high school football games or even most dances because practicing swimming was her passion and number one priority. She knew she had to not attend some events as a means to be the best, and he hard work and dedication are exactly what got her here today. You go, girl!

Hali noted that she may have taken her passion further than those around her, but when you want to be the best you take the necessary steps to end up on the podium.

Now that you know a bit more about Hali Flickinger, you have even more of a reason to cheer her on tonight during the finals!