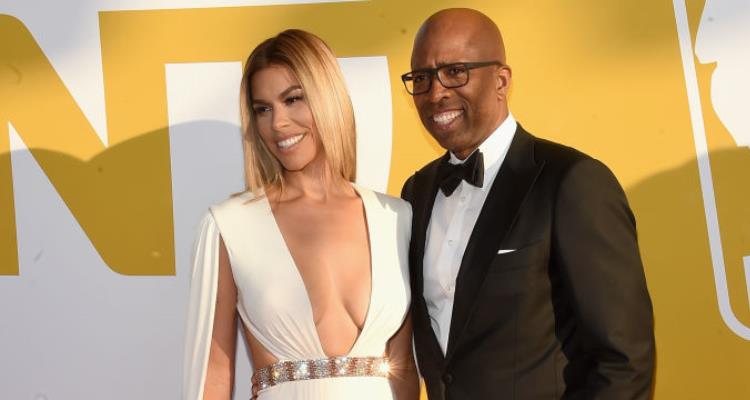 Power couple, Gwendolyn Osborne and Kenny Smith have officially listed their Los Angeles home and we can’t figure out why they would want to leave a place that nice! The former basketball player—who currently works as an NBA analyst—and his wife listed their home for a reported $3.595 million! Since fans already know enough about the former basketball star, we thought now would be a good time to give fans some details Kenny Smith’s wife. So keep reading out Gwendolyn Osborne wiki for all the info you need!

Gwendolyn Osborne age is 39 and she was born August 7, 1978, in Bath, England. She is biracial; her mother is Jamaican and her father is British. Gwendolyn is a model, actress, and singer who is best known for being a model on The Price is Right for 12 years, since 2005. She left the show after her 12th season and is now the COO of Smith Entertainment Group, her family-owned business.

Osborne has been married to Kenny, 52, since 2006 and they met by chance when she was planning an event, without knowing that it was for her future husband.

“I tried to work as an event planner with a friend, and it turned out to be Kenny’s event that we were planning for,” she said to CBS on how they met. “I had no idea of his fame in the basketball world! Of course, he wanted to take me on a date right away, but I was like: ‘No buddy! We will finish this event and if you can wait out the three months of planning to take me on a date, then we can go on one!’ The event was a success, and I went back into modeling and acting. He was a gentleman and waited it out, and that was 12 years ago; a marriage, and two more kids on top of the blended three we already had. Phew! Here’s my Valentine!”

Osborne also commented on working with her husband, saying “It’s something that I’ve always done. We’ve worked together for quite a while whether it’s managing a household of 5 children or business wise. We respect each other’s visions and differing creative processes.”

If there’s one way to reach Osborne or get in touch with her, it’s Instagram. She often posts photos of her family, upcoming projects, and anything that inspires her. One of her more personal posts was about Suits star Meghan Markle falling in love with fiancé Prince Harry and what it meant to her.

In the caption, she said, “Growing up as a young black girl in Bath, England I never imagined a day there would be a black woman in the Royal Family. I’m overjoyed for what’s to come at Kensington Palace. You go Prince Harry & Meghan Markle!!”

While her celebrity crush has been listed as Idris Elba (who’s isn’t), Osborne had no problem telling Naluda magazine that she’s a fan of Oscar-winning actresses, Meryl Streep and Viola Davis.

“Meryl Streep. I had to study her in college and she is constantly growing and stretching as an actress. I really respect that. I love Viola Davis also. She has worked hard for an extremely long time and I’m so happy to see her getting her shine now.”