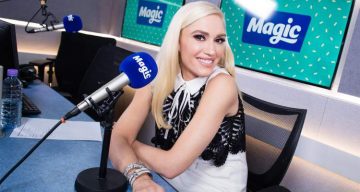 Gwen Stefani went from her ska band beginnings to a pop icon, and successfully turned her trademark aesthetic into a lucrative business. This multi-faceted artist has earned herself a net worth of $100.0 million in 2017 and it looks like things just keep getting better for her!

Coach Gwen Stefani may be sitting out of The Voice this season, but she’s got some major plans for the holidays with her fellow coach and beau, Blake Shelton! Gwen Stefani and Blake Shelton are so perfectly matched, she confessed that they converse with each other in music. Aren’t they the cutest? The pop diva found love soon after a bitter divorce from Gavin Rossdale. Did her divorce put a dent in her $100.0 million fortune? Find out about Gwen Stefani’s net worth, right here.

Stefani once sang of her childhood dreams for fame and riches in her big hit, “Rich Girl.” Not only did she make her dream a reality, but she’s also become a role model for young girls everywhere. She built her net worth (that’s estimated at $100.0 million) from her music and business.

She is one of the highest paid coaches on The Voice, both past and present. Adam Levine, Blake Shelton, Miley Cyrus, and Stefani are reportedly paid more than $13.0 million per season of The Voice. The following table compares Stefani’s net worth with her fellow coaches.

Her father worked for Yamaha as a marketing executive and her mother was an accountant before she became a housewife. They instilled their love for music in Gwen and her siblings, Jill, Todd, and Eric.

Eric, a keyboardist, formed the ska band, No Doubt with Gwen as the lead vocalist. He left the band early to pursue a career in animation on The Simpsons. But the band helped launch Gwen’s career.

With bassist and keyboardist Tony Kanal, guitarist and keyboardist Tom Dumont, and drummer Adrian Young, they signed a record deal. However, their ska-pop music failed to match the grunge trend of the ‘90s. It was “Don’t Speak” from their third album that gained the band visibility. Most of her songs at that time were about her breakup from Kanal and soon, she was named the “Queen of Confessional Pop.”

During No Doubt’s hiatus, she embarked on her solo pop career and churned out her three biggest hit songs, “What You Waiting For,” “Rich Girl,” and “Hollaback Girl” with her album, Love. Angel. Music. Baby. “Hollaback” was No. 1 on the Billboard Hot 100 for four weeks, and the first U.S. single to sell over one million digital downloads.

Her multiple awards included three Grammys. Including her success with No Doubt, she sold over 30.0 million albums worldwide.

From her midriff-baring days in No Doubt, to her unchanging makeup in “The Sweet Escape,” Stefani set a trend with her trademark red lipstick and arched eyebrows. She is a natural brunette but her hair has been platinum blonde since ninth grade. She’s rebuffed many rumors about plastic surgery for her ageless style.

She name-dropped the many people who influenced her eclectic fashion, but takes her cue from Japan —particularly Tokyo’s unique fashion hub of Harajuku. She styled herself in No Doubt but when she was introduced to haute couture, she was inspired to launch her first clothing line, L.A.M.B., named after her debut solo album. Inspired by Guatemalan, Japanese, and Jamaican fashion, the line became a hit with celebrities like Nicole Kidman and Teri Hatcher.

By then, she was heavily promoting her music with her four Japanese-American backup dancers she called her Harajuku Girls. It was no surprise when she expanded her fashion business with the less expensive, Harajuku Lovers line. The line also carried merchandise like phone charms.

She took her Harajuku empire one step further by producing an animated children’s series, Kuu Kuu Harajuku about a quintet that fights bad guys while taking over the pop world. Kuu Kuu Harajuku premiered on Nickelodeon in 2015. We’re in the middle of season 2, and season 3 is set to premiere in 2018.

While her own empire is expanding faster than you can say “Harajuku,” Stefani signed endorsement deals with L’Oreal Paris and Urban Decay. In 2008, Forbes estimated her income from her tour, fashion line, and commercials to be approximately $27.0 million, making her one of the highest paid celebrities of that year.

Before Taylor Swift became known for music on failed relationships, Gwen Stefani had already made it a thing. She once admitted that she was heavily invested in her relationship with bandmate, Tony Kanal to the point that the band almost split when they broke up. She went on to write several hits songs on the ups and downs of their relationship.

The 48-year-old met Gavin Rossdale, guitarist of alt-rock band, Bush when their bands were touring together. Love soon blossomed and they had two wedding ceremonies in 2002, unofficially dubbed as the ‘royal couple of rock music.’ They are parents to three sons: Kingston (born 2006), Zuma (born 2008), and Apollo (born 2014).

But after 13 years of marriage and two decades together, Stefani filed for divorce in 2015. They had their ups and downs, especially when a paternity test in 2004 revealed Rossdale was the father of model, then 15-year-old Daisy Lowe. The divorce came on the heels of rumors that Rossdale was cheating on Stefani with their sons’ nanny.

Their divorce was finalized in 2016 with Rossdale agreeing to an “unequal split” of their assets. They didn’t sign a prenup and Rossdale agreed to less than half of everything the couple earned during their marriage. Sunshine came out unscathed in the divorce, with both parties retaining their respective music earnings and Stefani keeping her fashion business income for herself.

They split up their various properties around the globe. Stefani kept two homes in Los Angeles while Rossdale got their four homes in Europe. The Beverly Hills home they shared sold for $35.0 million and was reportedly split equally between the exes. It’s a big step-up from the $13.5 million in 2006 they bought that mansion for.

They share joint custody of their three sons and are reportedly each required to deposit $1.0 million into an expense account for their children.