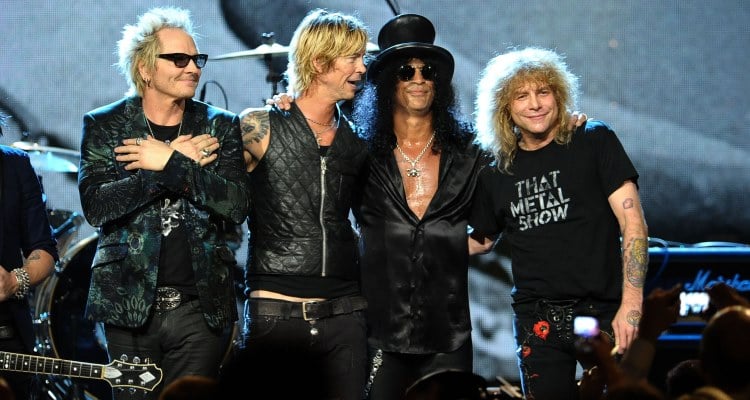 On June 29, 2018, Guns N’ Roses re-released their classic ‘80s album, Appetite for Destruction, and fans may see that same album top the charts once again! Now, it’s been digitally remastered and is all set to return to the Billboard charts after nearly three decades. The former No. 1 album will re-enter the list at No. 10 on July 14.

Billboard has confirmed that the new top 10 chart, which will officially be updated on July 14, 2018, will feature the classic Appetite for Destruction album at No. 10. Buzz began about the rerelease a few months ago, with fans spotting clues promoting the 1987 album.

One fan took to Facebook to post a photo of the side of a building with five billboard-sized images of the classic band members in their “skull” art form, with speculation as to why they were being promoted again. Are they releasing new music? Will there be a reunion tour?

The Internet got hold of the rumors, and until now, the speculation continued.

When Did Appetite for Destruction Come Out?

Guns N’ Roses’ Appetite for Destruction album was their debut into the wide world of classic rock music. It was released on July 21, 1987 by Geffen Records, and immediately made its way up the charts.

Fans everywhere were aching to get their hands on an Appetite for Destruction vinyl disc. Eventually, the album continued to see success over the years as technology advanced and the songs became available in a wide variety of new ways.

From compact discs and MP3s to full digital albums and digital downloads, the classic album has received continuous play over the years. There are even DVDs and full Appetite for Destruction box sets available—which are still selling today!

Guns N’ Roses proved that they are one classic rock band that has never gone out of style.

Now that the album has been digitally remastered and rereleased, many are trying to remember which songs were actually on the classic album. It was one of the best-selling records of all time, with over 30 million copies sold worldwide, and it’s still touted as one of the “greatest albums of all time” today.

But Appetite for Destruction featured some of their biggest hits, including “Welcome to the Jungle”, “Sweet Child O’ Mine”, and “Paradise City,” many of which are often still downloaded today.

So, it really comes as no shock that after being digitally remastered and rereleased, the album would again see huge success! In fact, the “new” album even has a couple of bonus tracks, including a previously unreleased version of “Shadow of Your Love.” It has already peaked at No. 5 on the Mainstream Rock Songs airplay chart after recently being promoted on the radio!

Appetite for Destruction originally spent five non-consecutive weeks on the Billboard 200 between 1987 and 1988. And now, nearly 30 years later, they just might do it all over again!