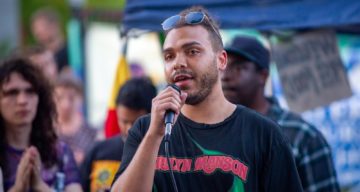 Gregory McKelvey speaks at OccupyICEPDX, on June 19, 2018, in Portland, OR. (Photo by Diego G Diaz/Icon Sportswire via Getty Images)

When you speak about Oregon and the fight for social justice there, you can’t not mention Gregory McKelvey. The political strategist, commentator, and activist emerged as the face of the Beaver State’s political protests following Donald Trump’s presidential win. And he has continued to stand for Oregon youth, POCs, and the marginalized. This activist has built a sought-after media presence through his work. So, those who discover his political commentary often ask who Gregory McKelvey is and about his background. We reveal his background in activism here in this Gregory McKelvey wiki.

Gregory Robert McKelvey was born on March 20, 1993, and is a native of Portland, Oregon. He was raised in a blended family with five other siblings by Greg McKelvey Sr. and Connie Elkins McKelvey.

His father Greg Sr. is a musician, saxophonist, composer, and educator among many things. His mother Connie is an attorney and an activist against domestic violence.

Gregory’s family are activists on various platforms. One of his brothers, Sahaan McKelvey, is a youth and family advocate among the many things he does for the young people of Portland.

His career in political strategy and activism began when he was a student. He was a longtime volunteer for Hands On Greater Portland and an organizer with the Benton County Democrats. He was a law clerk at a local law firm and also served as a campaign manager for multiple Democrat candidates in county elections.

McKelvey’s fight for social justice is visible through his stints as communications director of Portland’s Resistance, teacher/trainer at New Avenues for Youth, operations director at Brown Hope, and more.

He served as the campaign director for nonpartisan Portland mayoral candidate Sarah Iannarone in 2019. He served as the vice-chair of the Black Caucus of the Democratic Party of Oregon and the board president of Brown Hope.

Besides running his political strategy consulting business, McKelvey is best known for leading Black Lives Matter protests in Portland. He rose to prominence by leading the anti-Trump protests in the city following Donald Trump’s 2016 presidential win. Besides earning national attention in the media, he also delivered a Ted Talk on the importance of protests and community activism to bring about social justice.

Reports emerged in 2018 that McKelvey, the face of Portland’s anti-Trump movement, was arrested when he was 18. He was reportedly accused of strangling and kidnapping an ex-girlfriend.

According to several Oregon news outlets, the alleged incident occurred in September 2011 when McKelvey was a student at OSU. The alleged victim was 17 and reportedly visiting him at college.

The case was eventually dismissed and case records were expunged. McKelvey reportedly contacted the editor of the publication that originally reported on the incident and the report was removed in early 2018.

McKelvey initially stayed quiet as fellow activists and his critics demanded a statement from him. However, he broke his silence with a piece he penned for Medium.

McKelvey clarified that while he was arrested, he was neither indicted nor convicted. And said no reporter deemed his story worthy of covering at that time.

He gave his side of the story where he claimed that his ex-girlfriend had arrived on campus, become intoxicated, and gotten into a physical altercation with another woman. McKelvey allegedly intervened to stop the altercation, and he said there were multiple witnesses to corroborate this.

Police allegedly arrested his ex. He was arrested a couple of days later, but the charges didn’t stick.

McKelvey said he has refused to talk about the incident to avoid the negativity that would come his ex’s way. He also said that she contacted him around the time the story resurfaced to tell him that a reporter had tried to get her to give her side of the story but she had refused.

Gregory McKelvey has been in a relationship with fellow activist Kat Stevens for a long time. They married on June 27, 2020.

Gregory and Kat McKelvey are parents to two children—a son named Stokely born on May 23, 2018, and a daughter, Sojourner Hollis McKelvey, born on September 9, 2019.

Besides running McKelvey Consulting together, Kat and Greg are the organizers of anti-Trump protests and vehement political activists.