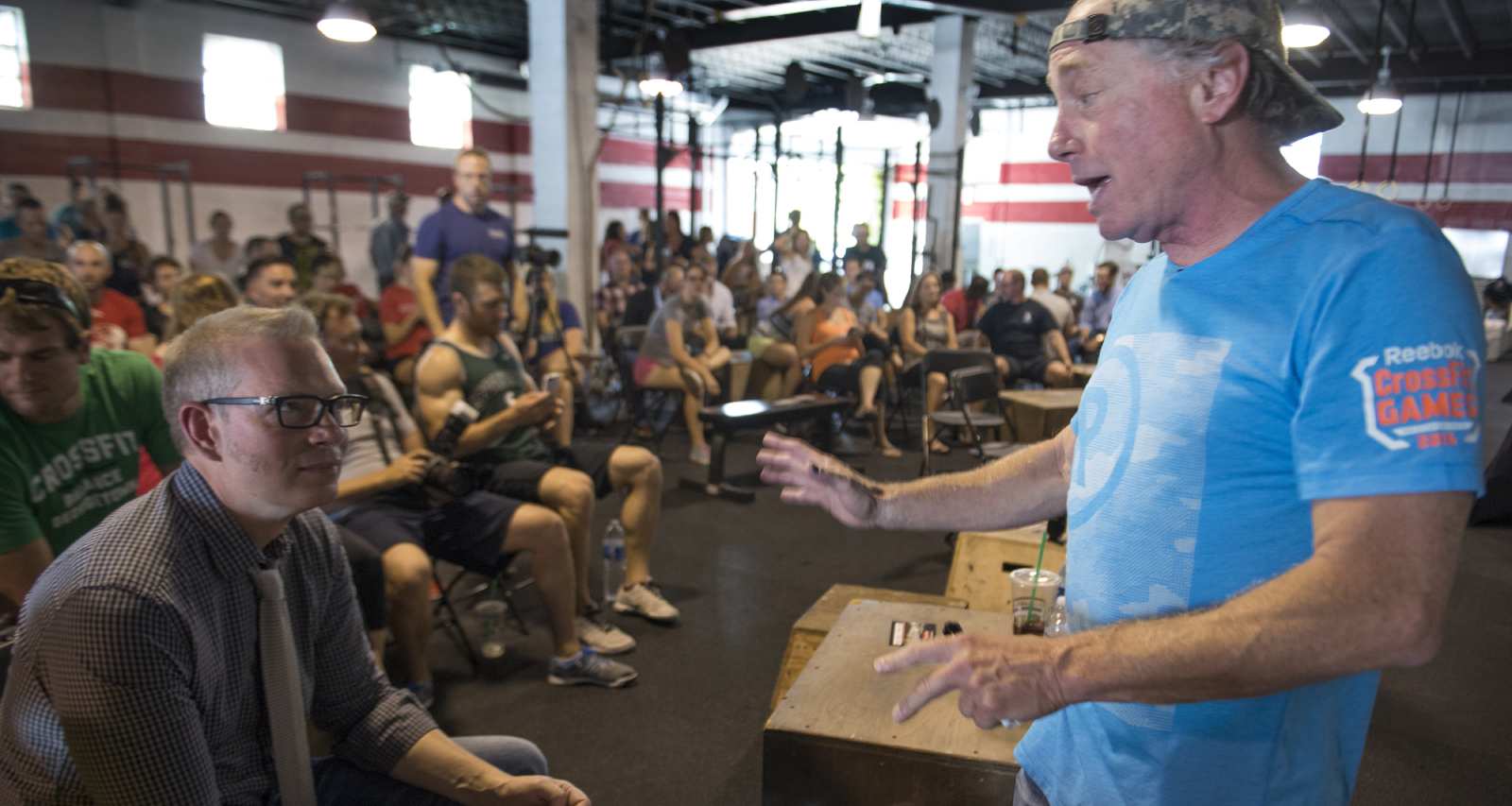 Crossfit Inc. founder and CEO Greg Glassman (R) talks to employees prior to a presentation at the Half street location in Washington, DC on July 31, 2015 (Photo by Linda Davidson / The Washington Post via Getty Images)

Greg Glassman, the unapologetic CEO of CrossFit, is in hot water because of his insensitive response to the current fight for justice for George Floyd. Glassman is the 100% owner of CrossFit, a style of workout he created and turned into a religion for hardcore fitness enthusiasts. Millions have adopted his fitness regime that has had its fair share of controversies. Find out about the fitness mogul who created CrossFit right here in Greg Glassman’s wiki.

Greg Glassman Had Polio When He Was a Child

Gregory Allan Glassman was born on July 22, 1956 in San Diego County, California. He and his sister, Kathy, grew up in Woodland Hills in Los Angeles.

Gregory Glassman was only 10 months old when he contracted polio. But he wouldn’t be diagnosed until a year later.

As a child, he relied on a walker to get around. “I was just one-legging it for a while,” he said. “I’m not the wallowing type.”

“At home, there was nothing but mischief and vandalism. My mom was pretty mean-spirited. And my dad turned everything into a pissing contest,” he said about his mom and rocket scientist dad.

Nonetheless, the most wholesome part of his childhood was spending the summers with his grandparents in Alabama. In school, his focus was on sports and making his upper body stronger.

Contact sports and swimming weren’t viable options as sports given his medical condition. So he became a ring man in gymnastics, despite his parents’ concern for his health.

Glassman began coaching in gymnastics right from high school. His gymnast experience, power lifting, and calisthenics became the basis for Glassman to develop the CrossFit program.

Glassman Developed CrossFit When He Was 16

Gymnastics strengthened Glassman’s upper body, but he realized his body wasn’t attuned to natural, functional movements. With functional movements in mind, Glassman combined gymnastics with other techniques to develop almost the entire CrossFit program in his garage at only 16 years old.

He went to college, but dropped out, taking a fast track into the fitness industry. Together with his client-turned-second wife, Lauren Jenai, he founded CrossFit, Inc. in 2000 in Santa Cruz, California.

From their first affiliate gym based in Seattle in 2005, CrossFit has grown to over 13,000 gyms in two decades. Glassman is now the CEO and his sister is the affiliate director.

Glassman and CrossFit have had their fair share of controversies, especially because of some unorthodox social media management. In recent history, Glassman’s insensitive tweets about George Floyd have earned him the ire of Internet users and led to some brands and gyms distancing themselves from CrossFit.

Glassman Bought Out His Ex-Wife’s Shares in CrossFit

Greg Glassman’s first marriage was to Brande Jones, his childhood neighbor. They have at least one son, Blakely Glassman, who was born on July 18, 1989.

Also Read: Glenn Stearns – Everything You Need to Know about the Founder of Stearns Lending, LLC

After their divorce, Glassman married his client Lauren Jenai, with whom he founded CrossFit. Jenai filed for divorce in 2009, but it was in 2012 that their contentious divorce starting making headlines, up until it was finalized in 2013.

To prevent a corporate takeover of CrossFit Inc., Glassman bought Jenai’s shares in the company that they co-founded for $16.2 million, with a loan from Summit Partners.

“My husband bought my half of the shares as a settlement of the divorce,” Jenai said. “I had to give up half of the company to be divorced.”

While Glassman got complete control of his company, Jenai was devastated to lose the brand she helped create. She raised her four children alone, while battling depression. But she also created her own fitness regime, Manifest.

Greg Glassman met his third and current wife, Maggie Robinson, a CrossFit athlete almost three decades his junior, in 2013. According to Glassman’s version of the events, Robinson was a waitress at a San Diego restaurant that he frequented. The official version is that the CrossFit founder met her when she was on a date with his head of legal.

Glassman is said to be a father of seven children. But only Blakely can be officially identified among his kids.

Don’t Miss: Who Is GT Dave? Facts to Know About the Kombucha King