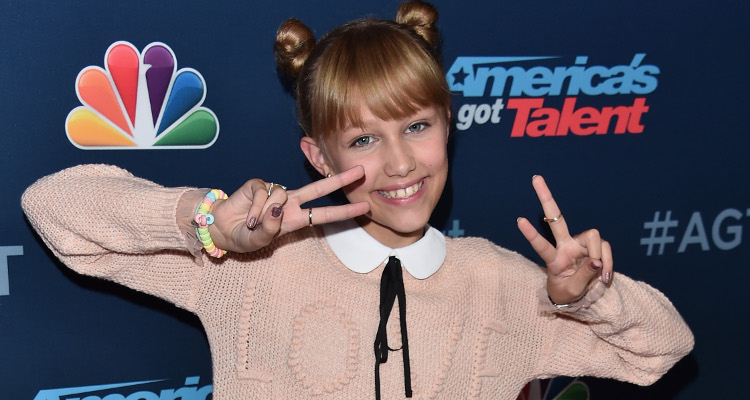 America’s Got Talent winner, Grace VanderWaal is very busy these days. She performed in Las Vegas and has an album underway. She’s also getting ready to appear on Cyndi Lauper’s holiday show.

We can never get tired of listening to Grace VanderWaal’s amazing voice accompanied only by her ukelele. The “Next Taylor Swift” has a host of performances and appearances lined up for the coming weeks. The America’s Got Talent season 11 winner will perform at Planet Hollywood resort in Las Vegas for four nights. She’s also making post-AGT appearances, and performing on several talk shows. She’ll also take part in Cyndi Lauper’s annual holiday show.

Twelve-year-old VanderWaal will headline the America’s Got Talent Live show at Planet Hollywood Resort and Casino from October 27 to October 30 at 7:30 p.m. She has been diligently practicing for her debut concert, and has teased her fans on social media with clips from practice.

We can also listen to an album VanderWaal’s own compositions soon! She has signed with the record label Syco under Simon Cowell, the AGT judge who dubbed her the “Next Taylor Swift.” She also shared behind the scenes footage of her first photo shoot on Snapchat.

I am sooooooo excited about what this is sounding like. @SimonCowell can’t wait for you to hear it ???? @ColumbiaRecords @greg_wells pic.twitter.com/ugVM5NgsYu

Cyndi Lauper also announced that VanderWaal will be a part of the star-studded lineup for her December 3 Home for the Holidays show, where money is raised to assist homeless LGBTQ youth. VanderWaal will perform in the show along with Billy Corgan, Sharon Van Etten, Ballets with a Twist, Judy Gold, Kate Bornstein, Maya Jupiter, Sara Ramirez, and other performers that have yet to be announced.

Before she kicks off her Vegas shows, VanderWaal will be stopping by The Tonight Show Starring Jimmy Fallon to perform an original song.