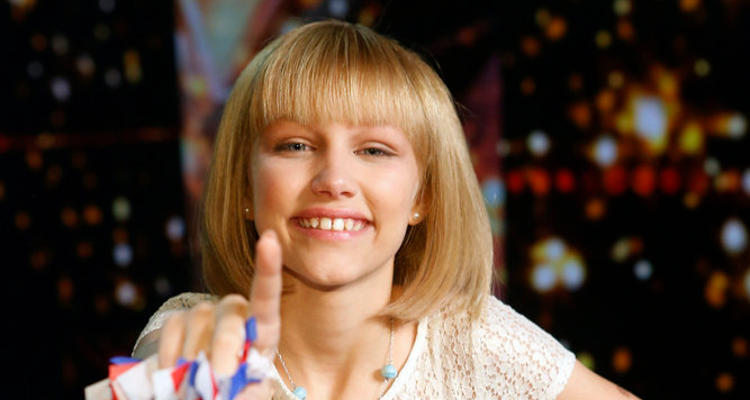 The winner of America’s Got Talent 2016, 12-year-old Grace VanderWaal, has swept the country off its feet. The singing sensation wowed the AGT judges and audiences with her original song compositions like, “I Don’t Know My Name,” “Beautiful Thing,” “Light The Sky,” and “Clay.” Grace VanderWaal has earned a devoted fan following, who are now searching the internet for Grace VanderWaal Snapchat and Grace VanderWaal Facebook. Her massive fans base has garnered Grace VanderWaal’s videos millions of likes on YouTube.

The adorable tween has a verified Instagram account, which has over 921,000 followers. VanderWaal’s bio states that the account is owned by her mom. Isn’t that sweet? When she isn’t penning heartwarming music, the talented musician is like any other child her age, fooling around with her friends and posting silly selfies with her elder sister Olivia, whom she calls her best friend. VanderWaal has also posted photos with her fellow America’s Got Talent  contestants, as well as judges Howie Mandel and Mel B.

Grace VanderWaal’s Facebook account is a means for her to communicate with her countless number of fans. Her account has over 470,000 likes, and her mother operates it. Grace’s mother, Tina VanderWaal responds to all the comments left by her daughter’s legions of fans. Grace has been regularly posting Facebook live videos while she wass traveling or rehearsing for her AGT finals. Before her final performance yesterday, her fans left her sweet and touching messages of love and encouragement, to which Grace’s mother Tina occasionally responds.

Grace VanderWaal’s mother manages her Twitter account as well, and her bio reads, “She said she could and so she did.” Awww! Indeed, miracles can happen. With over 153,000 followers and over 7,000 likes, VanderWaal frequently posts updates about her life, including rehearsals and getting ready for the America’s Got Talent competition. The music prodigy has a loving and supportive family that includes her father, Dave, her Mother, Tina and her siblings, Olivia and Jakob. Grace also has two sweet dogs as pets in her hometown Suffern, New York, whose photos she often posts on social media.

Thank you so much @howiemandel for always supporting and believing in me. #MiraclesDoHappen #AGTFinale #AGT https://t.co/pdT6yGvWYP

Getting ready for tonight! Make sure to tune in pic.twitter.com/SudNlBgIze

Like many others, Grace is a fan of the fun Snapchat filters that have taken over the world of social media. She regularly posts photos of herself with her friends making faces and applying the dog and rainbow-vomit filters. Fans love to get a sneak peek into her eventful life, that is all-set to launch into stardom with her successful AGT stint.

Besides winning a $1 million prize, Grace will get a chance to headline a show in Las Vegas. In recent news, it was announced that the ukulele strumming starlet will headline the PH Showroom at Planet Hollywood Resort & Casino on October 27, 28 and 29! Grace will be joined by her fellow AGT contestants: The Clairvoyants, and mime comedian, Tape Face during her performances.

Having fun on snapchat I litterally can’t get enough of these crazy filters! #ThursdayThoughts #Snapchat pic.twitter.com/LUG6ZgtTgw

Grace VanderWaal first attracted attention after she began posting covers of popular songs by other musicians, such as John Lennon’s “Imagine,” Meghan Trainor’s “All About That Bass,” and Elvis Presley’s “I Can’t Help Falling In Love With You.” Subsequently, Grace began posting videos of herself, performing original songs that she had written like “Gossip Girl,” “The Good Just Gets Better” and “I’ll Hold Your Hand.” She catapulted to fame following her initial America’s Got Talent audition video, in which she performs her song, “I Don’t Know My Name.” The video went viral almost overnight and had over 35 million views! Grace’s Youtube channel “Oh Never Mind, It’s Just Me” currently has over 600,000 subscribers and the number seems to be increasing everyday!