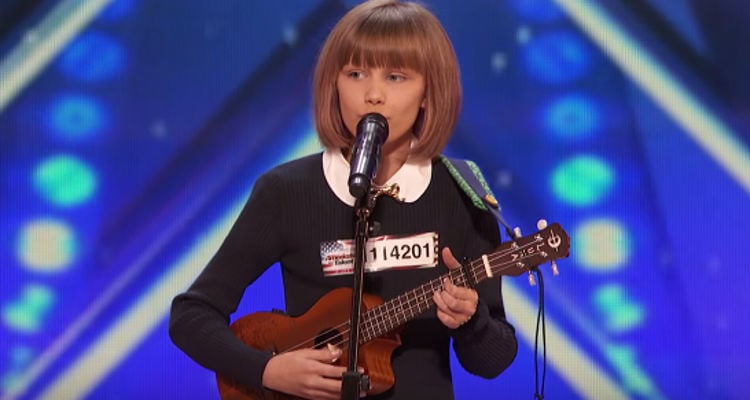 Every once in a while a new talent comes along and blows you away with his or her performance. It happens when you least expect it. It happened on the season debut of NBC’s America’s Got Talent 2016 when the sweetest 12-year-old girl walked up to the mike holding her ‘ukulele’ in hand. She explained modestly that she had never performed before a crowd before. Then she launched into an original song, “I Don’t Know My Name.” At the end of her performance, everybody was asking, “Who does Grace WanderWaal sound like?” For Grace VanderWaal, AGT’s live show is her next stop as Howie Mandel called Grace VanderWaal a ‘beautiful thing’ and predicted stardom for her.

The ‘Next Taylor Swift’

Judge Simon Cowell was amazed at VanderWaal’s performance and said that she sounded and reminded him of Taylor Swift. Cowell actually said that VanderWaal is the ‘next Taylor Swift!’ Grace VanderWaal’s performance definitely has that Taylor Swift-ish feel to it, but there’s just something so interesting about this young girl’s voice! Just like Swift, she writes her own songs, plays her own instruments and sings just as beautifully. Mandel called her a ‘miracle’ and then got on stage and kissed her. Gold confetti rained down on VanderWaal as she shed tears, in a state of disbelief that all of this was really happening. Her family rushed to the stage and embraced her, and the moment was breathtaking, even for viewers.

The AGT Grace VanderWaal episode has gone viral and taken the Internet by storm. It has had more than 60 million views already. Both her fans and even celebrities have praised VanderWaal and professed their love and admiration for her. Her performance was a revelation considering that she was in front of a large crowd and millions of people were watching her on TV.

When asked how she felt with all this adulation coming her way, VanderWaal said that it felt like a dream. She said that it felt that at any moment she expected herself to wake up from a coma in some hospital and wonder what happened. However, she was very clear that she was going to pursue music very seriously. She said, “I have realized that music is what I want my life to be.” With this kind of dedication and talent, there is no doubt that a great future awaits Grace VanderWaal. She may not know her name yet, but America already does!

To watch Grace VanderWaal’s performance on AGT, please click below:

For more on America’s Got Talent, please click on:

America’s Got Talent Winners List: Live Results 2 – Who Made it Through?