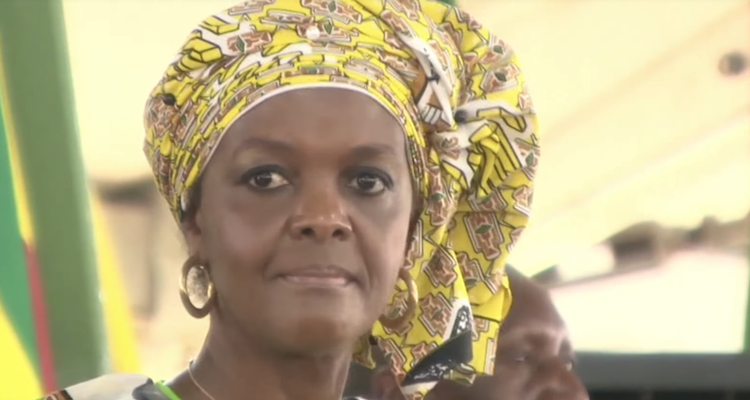 Grace Ntombizodwa was born on July 23, 1965, in the area of Benoni, Gauteng (South Africa), making Grace Mugabe’s age 52. Not much is known about her life before she met Robert Mugabe. We know that she was married to an air force pilot named Stanley Goreraza, who currently serves as the defense attaché at the Zimbabwean embassy in China. The couple had one son, Russell Goreraza, who was born in 1984.

In 1987, while working as Robert Mugabe’s secretary, the two began an affair. Both Robert and Grace were still married at the time. Grace had two children during this period, a daughter in 1988 named Bona, and a son, Robert Jr. This affair was kept secret from the general public until Robert’s first wife, Sally, passed away in 1992 due to kidney failure. Grace and her first husband divorced somewhere around 1995 or 1996.

In August 1996, Robert and Grace married in a lavish Catholic ceremony. They had one more child, another daughter named Chatunga in 1997. With the marriage official, Grace Mugabe became Zimbabwe’s First Lady.

Grace Mugabe’s time as First Lady is no stranger to controversy (both political and personal) and in many ways, managed to combine the two. After the marriage was official, her penchant for extravagant shopping became a prime target for Robert’s political opponents, as it was said that she was wasting tax payer’s money on these trips. Grace even earned the nickname “Gucci Grace” due to her expensive tastes. Grace Mugabe’s sons have also gained criticism as they also seem to share her taste in shopping, sharing their extravagant lifestyle on social media. One particular shopping spree in Paris had Grace apparently spending approximately $120, 000 (converted into U.S. dollars). Since becoming First Lady, she had two palaces built (although she claimed the first was built with her own savings). Grace Mugabe’s net worth is currently unknown.

This photo taken on November 8, 2017, shows a cheerful President Robert Mugabe (left) at a rally where he addressed party members and supporters to show support to Grace Mugabe (right) becoming the next vice president after the dismissal of Emerson Mnangagwa. One week later, Mugabe is under house arrest in Zimbabwe, according to President Jacob Zuma of South Africa in a statement on Wednesday after the Zimbabwean military appeared to have taken control of the country. “President Zuma spoke to President Robert Mugabe earlier today who indicated that he was confined to his home but said that he was fine,” the South African government said in a statement. Several tanks belonging to the Zimbabwean army were seen moving near the capital Harare on Tuesday. For more on this developing story, tap the link in the bio. Photo credit: AFP #RobertMugabe #GraceMugabe #Zimbabwe #Africa #TheGuardianNg

She is also known for violence, as she once allegedly ordered her bodyguard to assault a reporter while in China. Reportedly, Grace also took a few shots of her own. No criminal actions came of it due to diplomatic immunity. She was also accused of assaulting a girlfriend of one of her sons with an extension cord. While charges would be initially filed, once again, diplomatic immunity gave her a pass.

It has long been thought that Grace Mugabe has political aspirations beyond being the first lady, and that may be where the current issues in the Zimbabwe government gained their recent controversy. She was reportedly behind Robert’s firing of Vice President Emmerson Mnangagwa, who happens to be Grace’s chief rival for the presidential office. Unfortunately, Mnangagwa has strong ties to the military, and his firing may have been the last straw, as the military has now apparently taken over the government. Grace has reportedly fled the country, leaving her husband and family under house arrest.