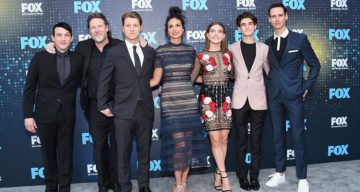 It feels like it’s been forever since we’ve seen young Bruce Wayne and Jim Gordon take on crime in Gotham City, but a recent trailer gave fans the Gotham season 4 premiere date! When does Gotham season 4 start? If you’ve been wondering when your favorite show is back on the air, keep reading for the Gotham season 4 release date and more!

Just days before the show’s return, the network dropped another Gotham season 4 trailer and let’s just say that Gotham‘s new season has more than enough villains running around! It’s hard to imagine that anyone would want to stay in that city after everything that’s happened, but in the world of DC Comics, there’s no such thing as a safe city. Gotham‘s fourth season will premiere on Thursday, September 21, at 8:00 p.m. EST on Fox.

Where do we even begin? We got a look back (in case you needed a refresher) at what happened last season but more importantly, we got a look ahead. With so many criminals flooding the city, we can’t wait to see how the show plans on using all those iconic characters in one season! We often see when shows have several characters but at some point, they can’t seem to give each one the appropriate amount of screen time. Though the show’s usually pretty good dedicating time to each character, everyone has a favorite that they wish they would’ve seen more of.

While some things on the show are up for debate, there’s one thing that fans can’t dispute: Gotham is not safe! The city is riddled with deranged villains and there’s too many for Gordon and Bruce to clear up on their own. But by the looks of the trailer, the two are working on their own to help heal the wounded city. Iconic criminals such as Scarecrow, Joker, Poison Ivy, Penguin, Mr. Freeze, and the Riddler have all come to take over the city. One thing fans have been waiting to see is Bruce Wayne suit up as Batman, but he doesn’t do that until his mid-to-late 20s. Instead, we see Lucius Fox create a bulletproof suit to help young Bruce while he’s “rock climbing” at night. Will Gotham finally be safe? And will fans finally see Bruce and Gordon work together?

A Dark Knight is coming… ? #Gotham returns on a new night, Thursday, September 21 at 8/7c!

Does Everyone Have Nine Lives?

We saw Selina Kyle get pushed out of a window and later become surrounded by a litter of cats, much like the ’80s Batman film. But now, she’s back and taking her cues from her new mentor, Tabitha, who also mentors Ivy. Fans will also see Selina act more like Catwoman from the comics and take on Tabitha’s whip for herself. Speaking of which, Barbara is back from the dead (Tabitha killed her), but it seems that no one stays dead in this town. Remember when Fish Mooney was resurrected? Resurrection and Batman go hand in hand, but the Lazarus Pit is usually involved. Butch was gunned down by Barbara in the season 3 finale and we learned that his real name was Cyrus Gold, which means he’s going to return as Solomon Grundy!