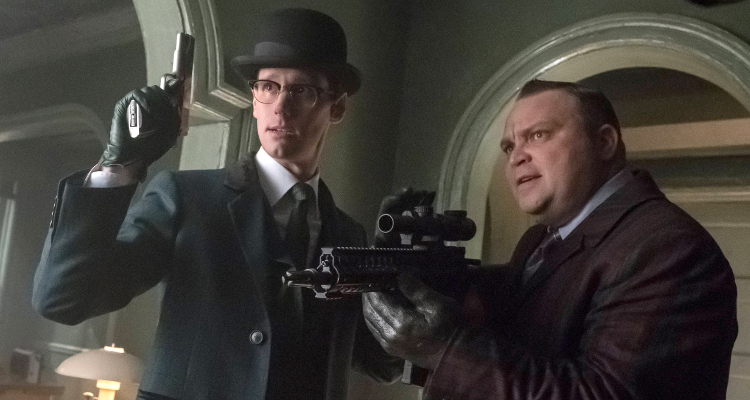 Gotham Season 3 ended with a bang! The series may be a Batman Origins tale, but it doesn’t hold back when it comes to the gallery of rogues. After the Penguin, the Riddler, and some possible big villains of DC, we got a sneak preview of the Dark Knight’s longtime villain. Who is Cyrus Gold in Gotham? We’ve got the scoop!

Fox’s Gotham is the gift that keeps on giving! Season 3 ended last night, but not without teasing the next installment of big bads. A new villain is coming to Gotham! Well, coming is not exactly the way to put it, as this particular villain has been hiding in plain sight all along! At the very end of the Gotham finale, we were teased by the appearance of Cyrus Gold. Avid DC and Batman fans should know who this character is. Who is Cyrus Gold in Gotham? For those of you who don’t know of him, we’ve got all the details right here!

While Gotham Season 3 aired, the show’s writers were dropping hints that we’d be seeing Cyrus Gold soon. As Batman fans know, Cyrus Gold is the alter-ego of notorious DC villain, Solomon Grundy. More on that later, but first a little background from the Gotham finale.

Also Read: Tami Roman Wiki: Everything You Need to Know about the “Basketball Wives” Cast Member

Butch Gilzean, played by Drew Powell, was shot in the head by Barbara Kean (Erin Richards). Though Kean was predicted to become Harley Quinn, she ends up dying at the hands of Tabitha Galavan (Jessica Lucas). So, now we’re not really sure about who Joker’s sidekick is. But at least we still get a new villain out of the finale!

While everything in the city of Gotham is seemingly on the mend, we see medical personnel tend to Gilzean. It’s a shocking twist, considering a bullet to the head should have killed him, but here he is in a hospital bed with all kinds of machines attached to him, seemingly brain-dead. The doctors look at his file and proclaim that the mob-hand “must have changed his name” before revealing that his name is Cyrus Gold. (Dum Dum Dummm!)

Who is Cyrus Gold?

As we’ve mentioned, Cyrus Gold is Solomon Grundy’s alter-ego. As longtime DC fans would attest, Solomon Grundy is a giant inhuman zombie, who has fought Batman and the other heroes several times. The undead villain was first depicted in All-American Comics #61 (1944). He’s had several origin stories that show his virtual immortality and tendency to wreak havoc with his superhuman strength.

Gotham tends to give its own take on the DC story line. As it happens, Grundy has been under our noses the entire time! He first started as Fish Mooney’s (Jada Pinkett Smith) loyal muscle in Season 1. He always served under other villains, including Oswald Cobblepot (a.k.a. The Penguin). He later has an endearing relationship with Tabitha Galavan, before being killed by Barbara Kean.

Last night’s finale was the show’s probable origin story of the supervillain. Many origin stories depict Cyrus Gold having an affair with a prostitute, who tries to extort him after claiming to be pregnant with his child. But when he doesn’t yield, she and her pimp kill him and leave his body in Slaughter Swamp, a marshland outside Gotham. About 50 years later, Gold rises from the dead under unexplained circumstances as an undead brute, who is later known as Solomon Grundy.

In Gotham, they oh-so-casually revealed that Butch Gilzean is actually Cyrus Gold. So, perhaps being shot by Barbara has turned him into the zombified monster? An ingenious twist by the writers if we say so ourselves! We can’t wait to see Cyrus Gold resurrected as Solomon Grundy when Gotham Season 4 returns this fall!