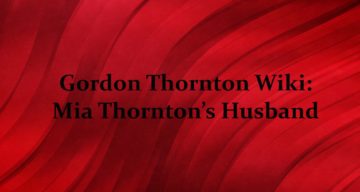 A new Real Housewife is coming to Potomac, and we anticipate huge drama! Mia Thornton was confirmed as the new reality TV debutante to join the Real Housewives of Potomac season 6, the trailer of which is already looking good. This new Housewife is married to Gordon Thornton, a local entrepreneur with a growing business. As always, fans want to know more about the new Real Husband. We don’t know how much of Gordon will we get to see in the coming season. But we can get all the details on him in this Gordon Thornton wiki.

Gordon Thornton was born on September 17, 1952, and is a native of North Carolina. He hails from Elizabeth City and lived in Charlotte.

Gordon has at least one brother, Marvin Thornton, who is also based in Maryland with Gordon and his family. Marvin, who served in the military overseas, returned home when Gordon offered an entrepreneurial opportunity.

Gordon Thornton is an entrepreneur with a career in franchising. From 1993 to 2012, he owned and operated McDonald’s franchises, which was understandably a demanding job.

In 2011, he became a multi-unit franchise owner of Massage Envy, which had its own difficulties. Mia was a franchisee of the business as well.

“You’re helping people feel better every day,” he says. “I’ve seen what chiropractic care did for my wife—it’s helped her treat her pain issues holistically and effectively. It’s hard not to be passionate about owning a business that makes this big of an impact on people’s lives. It’s also far easier to run than other businesses I’ve owned—McDonald’s was very hard to operate and even Massage Envy was a lot harder,” said Gordon.

While Marvin was in Afghanistan, his brother called him with an offer to join his new venture. Seven years later, he retired as colonel and went into business with Gordon and Mia.

The Joint Chiropractic has clinics in Washington, D.C., and Maryland. Mia Thornton serves as the regional developer.

Gordon Thorton married Mia Nicole Fields on May 5, 2012. Gordon has at least one adult child from his previous relationship with one Deborah Poole.

Their child, Debrecia Fonville, is still in North Carolina where her work is. Debrecia’s son, Darius, lives in Greensboro, and it appears that Gordon has attended special days in his grandson’s life, like his high school graduation.

Gordon and Mia are parents to at least two children, a son, Jeremiah Carter (born June 20, 2015), and a daughter, Juliana (born in July 2017). Mia has another son, Joshua, from a previous relationship.