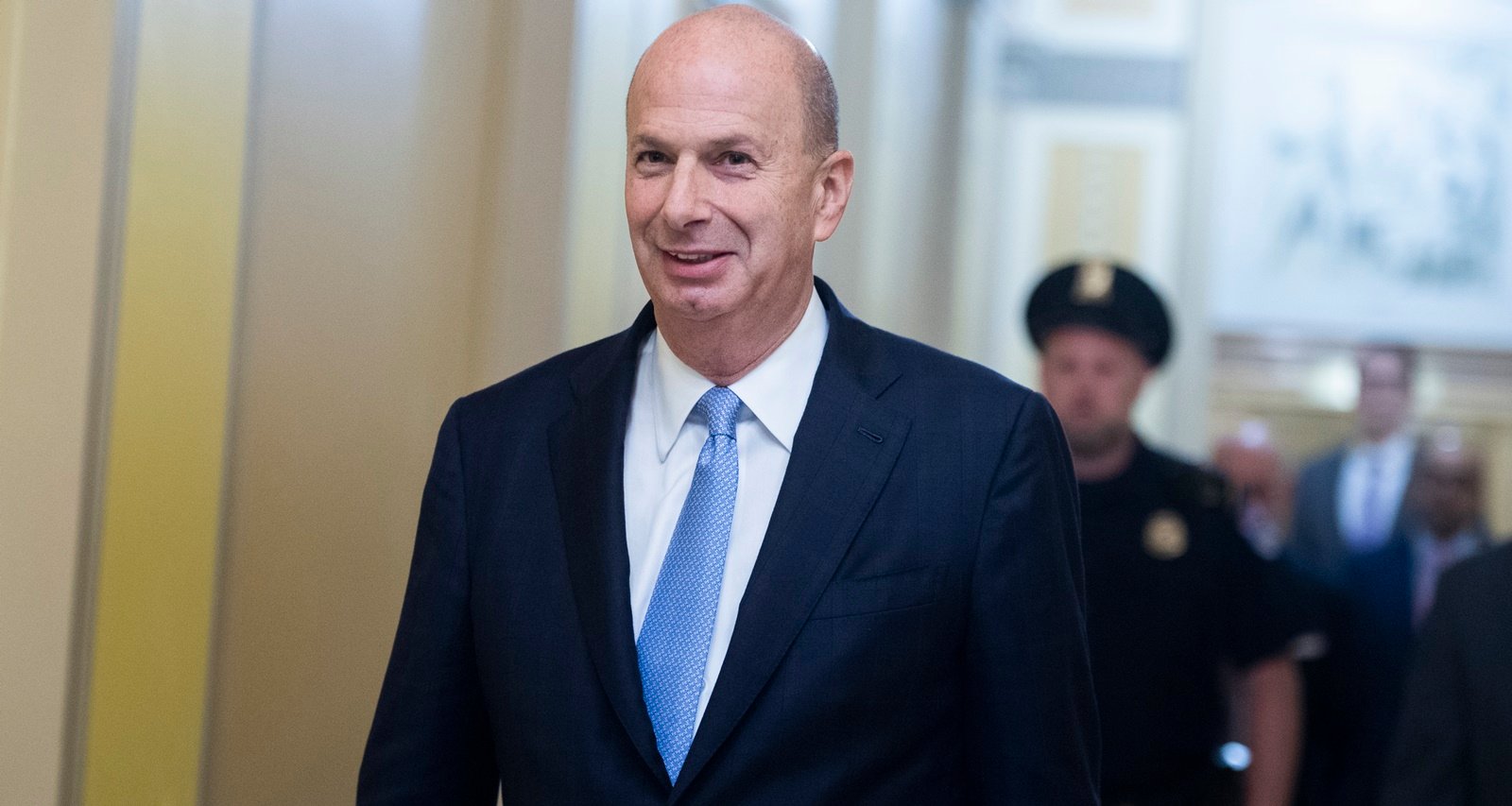 Gordon Sondland, U.S. ambassador to the European Union, arrives to the Capitol for his deposition as part of the House's impeachment inquiry on Thursday, Oct. 17, 2019. (Photo By Tom Williams/CQ-Roll Call, Inc via Getty Images)

U.S. Ambassador to the E.U. Gordon Sondland’s testimony has proved to be the defining moment of the impeachment inquiry so far. The focus is now on everything about this hotel magnate-turned-diplomat. Sondland, who said that he brokered a “quid pro quo” deal with Ukraine on Trump’s directions, had previously donated hefty sums to the GOP. Before his political career, he had built a fortune in the hotel business in Washington and Oregon and now his net worth is estimated at $60.0 million in 2019. Several analysts believe that this entrepreneur with virtually no political connections was appointed an ambassador because he and President Trump share one thing in common: building their wealth through developing hotels.

Gordon Sondland was born on July 16, 1957 in Mercer Island, Washington, to a pair of Holocaust survivors who owned a dry-cleaning business in Seattle. Growing up in his home state, he enrolled in the University of Washington, but dropped out to become a commercial real estate salesman.

The birth of Gordon Sondland, the hotel magnate, occurred in 1985, when he was 28. He saw an opportunity in the Roosevelt, a Seattle hotel that was going bankrupt.

With the $7.8 million that he raised from his wealthy brother-in-law and other family and friends, he bought the Roosevelt. Sondland would go on to partner with his sister’s husband to set up and develop more hotels across the country.

He owns Provenance Hotels, a company that owns and manages hotels throughout the U.S., including the Hotel Max and Hotel Theodore in Seattle; Hotel Murano in Tacoma;  Hotel deLuxe, Hotel Lucia, Sentinel Hotel, Dossier, and Heathman Hotel in Portland, Oregon; The Hotel Preston in Nashville, Tennessee; and Old No. 77 Hotel and Chandlery in New Orleans, Louisiana.

A business venture brought him to Portland, Oregon, where he met local real estate broker Katherine Durant. Though that deal didn’t manifest, the two dated and got married.

Durant, who was also from a prominent family, and her husband formed a power couple with major influence in Oregon’s economy. Their  most recent financial disclosure report cited their income as between $5.5 million and $9.3 million, for 2018 and the first four months of 2019.

Also Read: Elijah Cummings’ Net Worth At The Time of His Death in 2019

Sondland Has Many Major Investments

Besides his hotel business, Sondland is co-founder and head of Aspen Capital, which provides hard-money loans. Additionally, his wife runs Atlas Investments, which deals in real estate investments.

How did Trump's E.U. Ambassador Gordon Sondland, a hotel magnate with no diplomatic experience, get thrust into the middle of an impeachment probe? A look into his business record before his diplomatic career, shows he was never afraid to push boundaries. pic.twitter.com/2O8ikClxCn

Both he and his wife are prolific investors in the real estate business and other sectors. Sondland reportedly has a stake worth upwards of $50.0 million in Buena Vista Investments LLC of Seattle.

The couple also has liabilities, as with any real estate investor. In 2018, he reported his total debts amounted to between $14.0 million and nearly $71.0 million.

Sondland and Durant Have Made Large Political Donations

Due to their position of influence in Oregon’s business community, their individual roles on former Oregon Governor Ted Kulongoski’s various committees were called into question for potential conflicts of interest. However, when necessary, according to Durant, they’ve opted to take a step back from their business roles for their public positions.

When President Trump appointed Sondland as U.S. ambassador to the European Union in 2018, for example, Sondland transferred the chairmanship of Provenance and his other businesses to his wife.

They had minimal involvement in politics in the past, opting to participate in philanthropic and civic bodies in Portland.

Sondland, a registered Republican, has previously donated to the GOP. According to reports, more than 90% of the approximately $446,000 Sondland has given in donations to political campaigns has gone to Republican causes.

He organized and canceled a fundraiser for Donald Trump during the 2016 presidential elections. Companies registered under his name later donated a total of $1.0 million to Trump’s inaugural committee.

With Katherine Durant being a registered Democrat, the couple has also made donations to Democratic candidates. He donated $13,000 to Kulongoski’s 2002 gubernatorial campaign.

Sondland achieved ambassadorship without any prior diplomatic experience, save for minimal participation in Portland civic bodies. Some political watchers speculate that his contributions to campaigns and ability to make a deal are what made him a Trump appointee.

Sondland Has a Massive Art Collection

Many note the difference in Sondland’s and Trump’s hotel magnate styles. While the POTUS favors gilded towers in exotic locations, Sondland has shown a more refined style in rebuilding classic American hotels that reflect the local art and culture.

Small bit of trivia. Gordon Sondland has a staircase named after he and Katherine Durant at the Portland Art Museum.
Never noticed it before. pic.twitter.com/H5QAtvO5NY

Part of this classic aesthetic of his includes supporting local museums and a massive art collection he values at an estimated $25.0 million. “Katy and I have assembled a wonderful collection. We’ve been fortunate even to loan a couple of paintings to the White House,” said Sondland.

With his million-dollar art collection and Lear jet, Sondland has rarely made a secret of his wealth. A study of his financial disclosures until 2018 reveals that his hotel empire and assets are worth anywhere between $78.0 million and $185.0 million.

Sondland and Durant, with their kids Max and Lucy, reside in Portland, Oregon where Durant is from. They also own their “forever family house” in the Beaver State.

But Sondland maintains residency in Washington and is a registered voter there, allegedly for tax purposes.

He splits his time between their homes in Portland, Gearhart, and Palm Springs. His Portland home is valued at an estimated $2.2 million.

As an ambassador to the E.U., he maintains a residence in Brussels. During his tenure, he’s reportedly held between $15,000 and $50,000 in a Belgian bank.