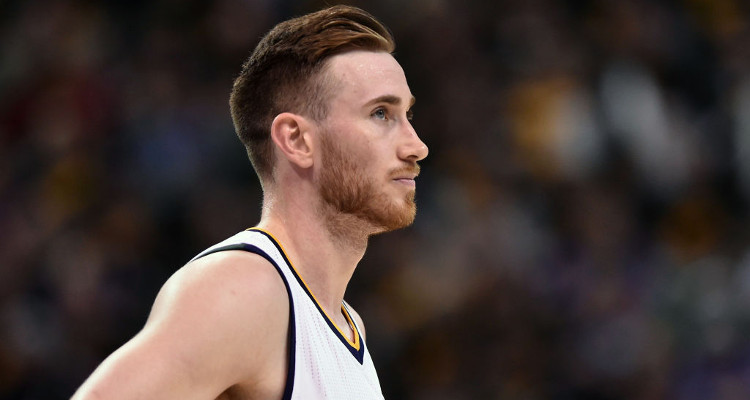 Gordon Hayward’s free agency created quite a stir in the NBA. But he finally announced his decision to say goodbye to Utah and join Boston. His announcement has invited a frenzy of reactions on Twitter.

Gordon Hayward penned an article in The Players’ Tribune announcing that he’s exchanging his Utah Jazz jersey for a Boston Celtics one. His decision came after a few weeks of free agency when everyone was waiting to know which team he would join, and he really gave us a hard time while mulling over his decision! It’s wonderful to see how grateful Hayward is about being a part of the Jazz piece titled “Thank You Utah.” Take a look at Gordon Hayward’s wiki to find out the Internet’s reaction to his big move.

He Almost Left Basketball for Tennis

Hayward grew up in Brownsburg, Indiana, where he lived with his father, Gordon Hayward Sr., mother, Jody, and twin sister, Heather. His parents, being averaged height, thought their son was destined to be short. However, he shot up to 6’8” as a senior in high school, leaving his 5’10” sister and their family to crane their necks every time they spoke to him!

The younger Haywards initially played tennis. With Heather, he was often featured in the Indianapolis Star when they played mixed doubles at the Indiana State Open. Heather played singles for her high school team, and the twins hoped to attend their parents’ alma mater, Purdue University.

But Hayward’s first love was basketball. His father pushed him to learn a guard’s skill set, but he didn’t think college basketball was a practical option at 5’11”. He was about to quit, but his mother told him to stick with it for one more year. When he went through an unexpected growth spurt, he was Brownsburg High School’s basketball star. Hayward was named first team All-State and led Brownsburg to the Indiana Class 4A state championship. He had recruiting profiles for both basketball and tennis and ended up playing college basketball.

Lucky to have my girls! I will always be taken care of

He Went to Butler University

Though Hayward was offered a scholarship from his dream college at Purdue, he accepted Butler University’s offer. He believed the 6:30 a.m. practice sessions would not interfere with his planned major of computer engineering, and Heather could also play tennis there.

He made a big impact in his freshman year by leading the Bulldogs to victory in the Horizon League. His freshman stats averaged 13.1 points and 6.5 rebounds per game, and he was named ‘Horizon Newcomer of the Year’ and first team All-Conference. In the off-season, he was named to Team USA for the 2009 FIBA under-19 Championship. Averaging 10 points and 5.7 rebounds per game, he made it to the All-Star Five team.

‪Great bounce back for the entire squad tonight! Everybody got involved, @indianageorge3 was ??? Let’s keep it rolling! #TakeNote‬

His Parents Didn’t Think He Was Ready for the NBA

With his emergence as a star in FIBA, agents started approaching Gordon Hayward’s parents. His father felt unprepared to counsel Hayward through the draft process, while mother didn’t think he was ready for the NBA. Eventually, Gordon Sr. looked into the process while Hayward’s coach, Brad Stevens, spoke to NBA scouts. Both projected Hayward as a top-20 pick of the 2010 NBA draft.

Gordon Sr. announced his son’s submission for the 2010 draft, but they didn’t hire an agent yet. The older Hayward prepared a detailed questionnaire to interview potential agents. Mark Bartelstein, with 25 years of experience, was the only one who made it through the interview unscathed and became Gordon Hayward’s agent. According to him, “His parents didn’t want to leave any stone unturned.”

Hayward gave up his college eligibility for the draft promising he would return to complete his degree. He was the ninth overall pick by the Utah Jazz.

It's going to take all of us tonight! #TakeNote

Hayward played 72 games in his rookie season. His stats averaged 5.4 points per game, and was shooting 47 percent from the three-point range. He earned more time on the court with every game until he played such a strong defense, he even made Kobe Bryant give a terrible performance!

His net worth hasn’t been calculated yet, but he has earned a total of $56.0 million in a seven-year career. He also has an endorsement deal with the eSports brand, HyperX.

Also so thankful to have this Mom in my life! Couldn't ask for a better person to raise my two beautiful girlies (even though neither of them look thrilled in this picture ?) #forcedpicture #happymothersday

Gordon Hayward was in a relationship with Kolbi Killingback, who was with him when he was drafted by Utah. They broke up after five years, and he moved on with Robyn Van Vliet. He must have been pretty sure she was the one, because he proposed to her after only five months of dating! They got married in 2014 and they now have two daughters together.

It’s not known how they met, but she also finished her education in Indiana. She played volleyball in high school and led her team to victory at the state championship in 2012. After graduating, she reportedly went to a cosmetology school, and she shares her healthy lifestyle on her social media. The couple lives in an expensive tennis estate in California, with a price tag of $3.35 million.

He Will Be Reunited with His College Coach

During his free agency, analysts predicted that the Celtics were a clear choice for the 27-year-old since his Butler coach, Brad Stevens, is now the Celtics head coach. But perhaps Hayward contemplated to stay with Utah. Even his agent wasn’t sure of his decision. But after much deliberation, he announced his decision to sign with Boston in The Players Tribune with an essay, “Thank You, Utah.”

The details haven’t been disclosed, but he reportedly signed a four-year contract worth $128.0 million! As happy as his new teammates, old teammates, and his fans are, the Twitterverse had to get some fun out of the suspense he created.

Moments after his announcement, Twitter responded with hilarious posts of (fake) shock, a fictional bromance with Brad Stevens and, of course, the ceremonial burning of his old jersey.

I'm excited to go on this adventure with this man! It's bittersweet leaving where we've called home and grown our family, but I'm excited to see where this path takes us! We are so grateful for everything Utah has done for us! ❤️ Also, as for all the mean comments and threats. Don't forget athletes are humans too. Treat others how you would like to be treated. It would never cross my mind to speak so negatively and so full of hate about oneself or their family.